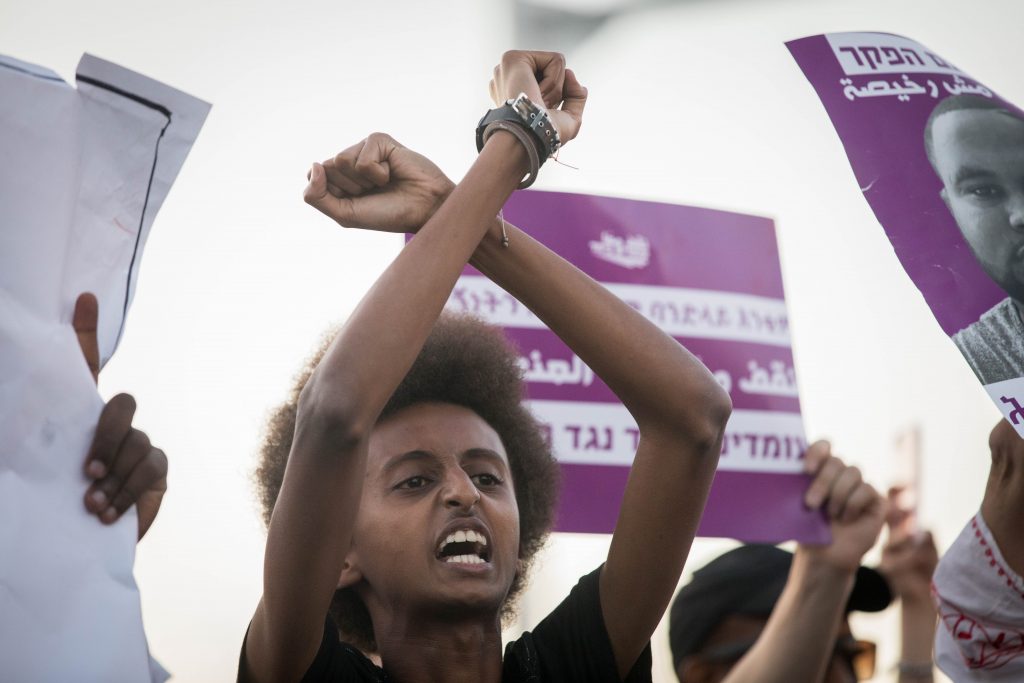 Protest demonstrations over the killing of an Ethiopian youth by an off-duty policeman continued across the country for the second day on Tuesday, as the victim was buried amid emotional cries for justice.

Netivei Israel estimated that some 50 to 60,000 vehicles were stuck in traffic jams caused by the demonstrators during the day. Altogether, traffic was disrupted in about 12 junctions.

At Kiryat Ata and elsewhere, police said protesters were burning tires, torching cars and throwing rocks and heavy blocks at them. Forty-seven officers were injured while trying to keep order during the day, police said.

Sixty people were reportedly placed under arrest. There were complaints that police are using excessive force to disperse them.

A 28-year-old protester was hit while blocking Highway 431 near the city of Lod, and was evacuated to a nearby hospital, Ynet reported.

At Tel Aviv’s Azrieli Junction, several car windshields were smashed, and protesters set a fire on a road near Kiryat Malachi which spread to fields nearby and were preventing firefighters from getting to the scene, according to Kan.

Disruptions and protests are expected to continue throughout the week of shiva.

On Tuesday night, Prime Minister Binyamin Netanyahu issued a statement of condolence and a warning that further chaos on the nation’s roadways will not be allowed:&

“I know that there are problems that need to be solved. We have worked hard and need to work more to solve them. But I ask of you one thing. Stop blocking the roads. We are a nation of law; we will not tolerate the blocking of roads. I ask you, let us solve the problems together while upholding the law.”

Police clashed with protesters blocking traffic in Kiryat Ata after the burial of Solomon Tekah, 19, who was shot dead on Sunday night.

The police were preparing to charge the off-duty officer with negligent homicide rather than murder or manslaughter, according to the latest media reports Tuesday night.

According to Channel 13, the officer told investigators that he did not intend to kill the youth, but that a shot fired at the ground ricocheted and hit him. It was meant as a warning shot, but was not fired into the air as is customary, because he was worried about injury to bystanders.

Earlier on Tuesday, the Special Investigations Department of the Israeli police issued a rare statement saying that new evidence has been uncovered in its investigation of the case. The evidence was said to include eyewitness testimony and footage from a security camera near the scene.

The officer who shot Tekah was arrested and being held for questioning on the claim that he opened fire only after his life was in danger from rock-throwing youths.

Police officials said they are conducting a “thorough and comprehensive” probe, but that the court had issued a gag-order prohibiting publication of details.

Earlier in the day, hundreds of mourners attended the burial in Kiryat Haim, where Tekah’s father Varkah delivered a tearful eulogy in his native Amharic:

“Give me back my son,” he cried as he entered the funeral hall. “My son had a joy for life and love of life. He smiled and he was sensitive.”

“We want to request forgiveness from Solomon. We weren’t there to defend him when the police killed him,” he said tearfully.

“We didn’t come to Israel for our children to be murdered; we will not pay the expensive price of our children dying young. Why are we burying a child?” he aksed.

His father demanded an independent investigation conducted by a body outside the police department, which he charged could not be trusted to investigate its own member.

“The police are now building a case and trying to reduce damage, and say that the boys were rioting,” Michal Avera-Samuel, director of the Association for Education and Social Integration of Ethiopian Immigrants, told Maariv.

The newspaper cited figures that since 1997, 11 young members of the Ethiopian community were killed by Israeli police officers in various incidents.

“We will continue to work to increase trust among the Ethiopian community and provide optimal service and security for all citizens of Israel,” the Police Spokesperson’s Unit said.

“I call upon the leadership of the Ethiopian community to do everything in their power to restrain the extra tensions and feelings, in order to continue to focus on the important process of integrating between the community and the police,” acting police commissioner Moti Cohen said on Monday after a meeting with senior officers in the coastal district.

The victim’s father voiced support for the protesters but told Channel 13 news that they should refrain from violence.

Elected officials, including Israeli Prime Minister Binyamin Netanyahu, have been appealing for calm and unity in the wake of the tragedy.

Shas MK Moshe Arbel said: “There is a responsibility of the elders of the city and the leaders of the people. We are here to also take responsibility. To come and look the Tekah family in the eye, and this glorious community, and say that we did not do enough.”

Blue and White MK Yizhar Shai said: “Solomon, we did not do enough for you. I apologize for this. I want to say to his family that it is important that we don’t only remember him as a victim, but as a martyr in an unjust war.”

Dozens of Ethiopian Israelis have joined a social media campaign declaring that they will refuse their reserve duties in the IDF over what they believe was a race-based killing.

Police transported a woman who was on her way to her wedding on Tuesday evening when she got stuck in traffic caused by the road blocks, TPS reported.

Later in the evening, another bride got stuck in traffic caused by the protests on Highway 431.