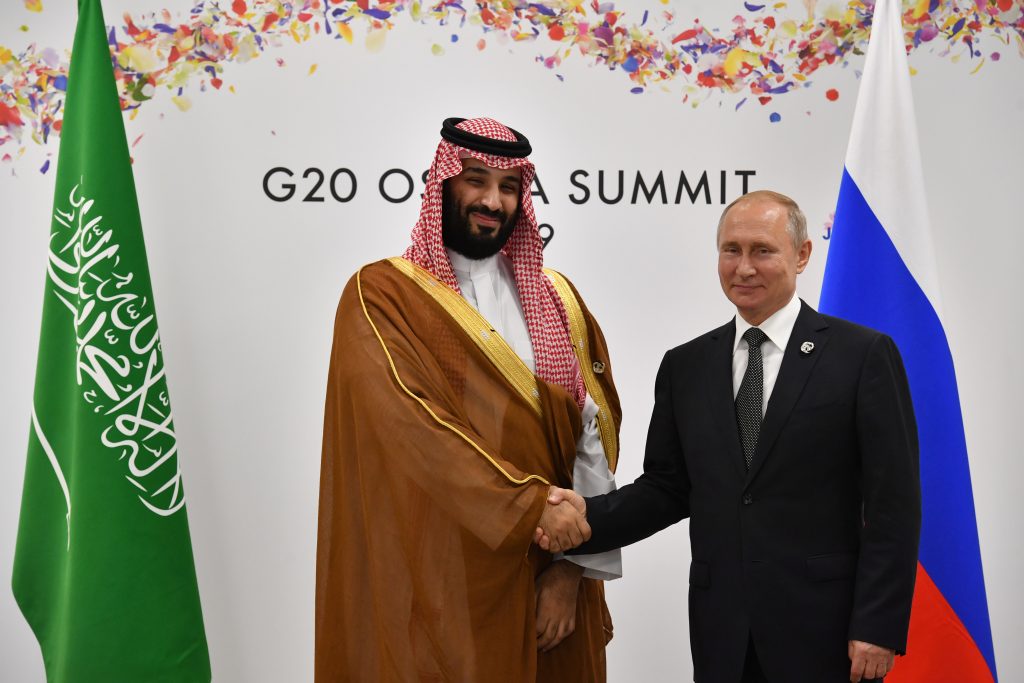 Russia has agreed with Saudi Arabia to extend by six to nine months a deal with OPEC on reducing oil output, Russian President Vladimir Putin said, as oil prices come under renewed pressure from rising U.S. supplies and a slowing global economy.

Saudi Energy Minister Khalid al-Falih said on Sunday that the deal would most likely be extended by nine months and no deeper reductions were needed.

Putin, speaking after talks with Saudi Crown Prince Mohammed bin Salman, told a news conference the deal – which is due to expire on Sunday – would be extended in its current form and with the same volumes.

The Organization of the Petroleum Exporting Countries, Russia and other producers, an alliance known as OPEC+, meet on July 1-2 to discuss the deal, which involves curbing oil output by 1.2 million barrels per day (bpd).

The United States, the world’s largest oil producer ahead of Russia and Saudi Arabia, is not participating in the pact.

“We will support the extension, both Russia and Saudi Arabia. As far as the length of the extension is concerned, we have yet to decide whether it will be six or nine months. Maybe it will be nine months,” said Putin, who met the crown prince on the sidelines of a G20 summit in Japan.

Falih, arriving in Vienna for the OPEC+ talks, told reporters when asked about Saudi preferences: “I think most likely a nine-month extension.”

Asked about a deeper cut, Falih said: “I don’t think the market needs that.”

“Demand is softening a little bit but I think it’s still healthy,” the Saudi minister said, adding that he expected the market to balance in the next six to nine months.

A nine-month extension would mean the deal runs out in March 2020. Russia’s consent means the OPEC+ group may have a smooth meeting if OPEC’s third-largest producer Iran also endorses the arrangement.

New U.S. sanctions on Iran have reduced its exports to a trickle as Washington seeks to change what it calls a “corrupt” regime in Tehran. Iran has denounced the sanctions as illegal and says the White House is run by “mentally retarded” people.

Kirill Dmitriev, chief executive of the Russian Direct Investment Fund who helped design the OPEC-Russia deal, said the pact in place since 2017 had lifted Russian budget revenues by more than 7 trillion rubles ($110 billion).

“The strategic partnership within OPEC+ has led to the stabilization of oil markets and allows both to reduce and increase production depending on the market demand conditions, which contributes to the predictability and growth of investments in the industry,” Dmitriev said.

Benchmark Brent crude has climbed more than 25% since the start of 2019. But prices could stall as a slowing global economy squeezes demand and U.S. oil floods the market, a Reuters poll of analysts found.

“WHO NEEDS AN OPEC MEETING?”

“The agreement confirms that the Saudi-Russian partnership paved the way to guarantee the interest of producers and consumers and the continued growth of the global economy,” Falih tweeted.

That Russia and Saudi Arabia effectively announced the deal before the OPEC gatherings will likely anger smaller members of the organization, who feel sidelined.

“Who needs an OPEC meeting?,” one delegate said after learning about the headlines from the Russia-Saudi talks. Some delegates said Iran might still put up a fight on Monday.

He said it may be wise to extend the agreement by nine rather than six months to avoid raising output during weak seasonal demand.

“It might make sense to keep the deal in place during the winter period,” he told reporters.