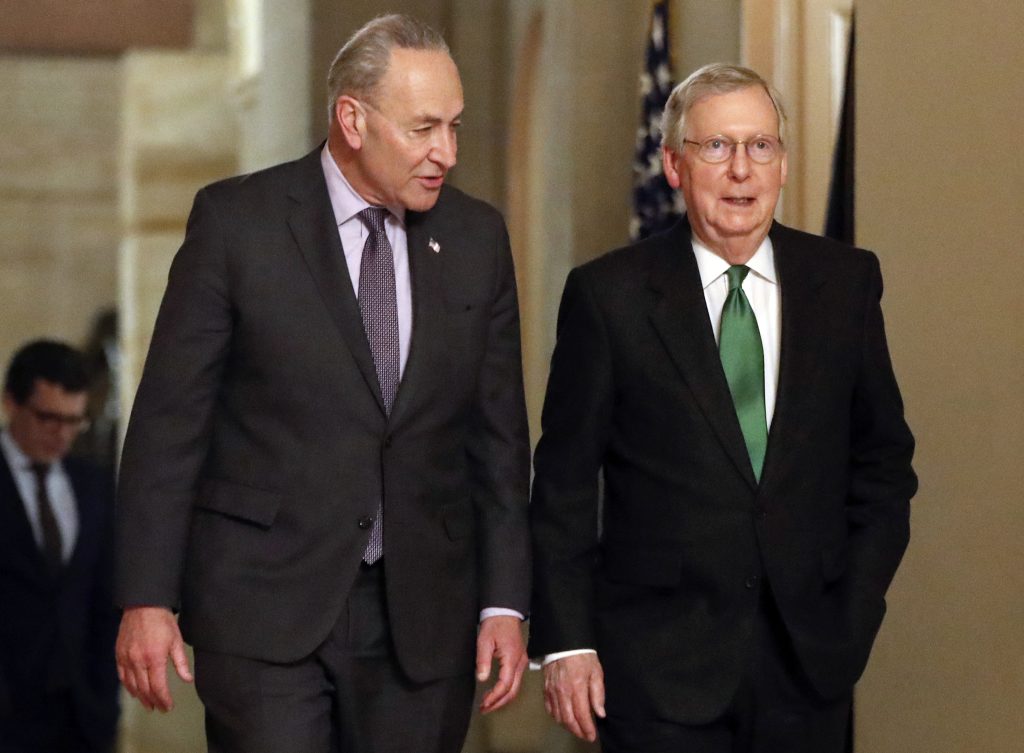 The Senate passed a $750 billion defense bill Thursday without resolving whether the bill will seek to restrain President Donald Trump from going to war with Iran, the most politically divisive element of the debate.

In a procedurally unorthodox move, the Senate will reconvene on Friday to vote on whether to retroactively include language in the bill prohibiting President Trump from engaging militarily with Iran without first seeking congressional approval, except in a case of clear self-defense.

“The American people are very afraid that this president, even if he doesn’t want to start a war, would bumble us into a war,” Senate Minority Leader Chuck Schumer, D-N.Y., said. “If there was ever a time that we should be rising to our constitutional obligation to debate and approve going to war, it’s now.”

The threat of conflict with Iran has overshadowed the debate over the annual defense bill in both the Senate and the House, which is expected to vote on its version of the legislation next month. The 86 to 8 vote in the Senate Thursday suggests that there is strong bipartisan support for most of the provisions in the legislation, though the House and Senate are expected to face serious hurdles as they attempt to reconcile differences between the two measures on nuclear weapons, President Trump’s diversion of military resources to the U.S.-Mexico border, and overall Pentagon spending levels.

But the escalating standoff with Iran has presented itself as a more urgent matter to be addressed in the must-pass legislation, as Democrats seek to assert what authority they can over the commander-in-chief’s shifting sentiments about whether to counter Iran with air strikes or other military action.

“Congress should have the guts and the backbone to come here and cast a vote before we order our troops into harm’s way,” Sen. Tim Kaine, D-Va., who authored the Senate’s Iran amendment with Sen. Tom Udall, D-N.M. He accused the president of breaking his anti-war campaign promises by potentially exposing the United States close to “an unnecessary war that would be catastrophic.”

But Republicans have been reluctant to endorse the effort, arguing that it would send a bad message to the Iranians if Congress appears to be challenging the president’s authority.

“It’s a message to our enemy who wants to destroy us that we have a president who is impotent — that he has no right to even be at the table, because if he’s reversed by his own Congress, in their eyes,” Sen. James Inhofe, R-Okla., said in an interview this week. “I think that the main thing here is the perception … the perception is that it’s not the president you deal with, it’s Congress.”

The Iran measure is being considered after the defense bill’s final passage in part because several of the Senate Democrats running for president are in Miami this week, participating in the first debates of the primary season. Yet it will be difficult for proponents of the amendment to secure the 60 votes they will need to clear procedural hurdles, even with the support of all Democrats and a handful of Republicans.

Regardless of how Friday’s vote turns out, Iran and the president’s war powers are expected to be an element of debate as the Senate and the House combine their defense bills, as the House is expected to amend Iran legislation into its defense bill when it takes up the matter next month.