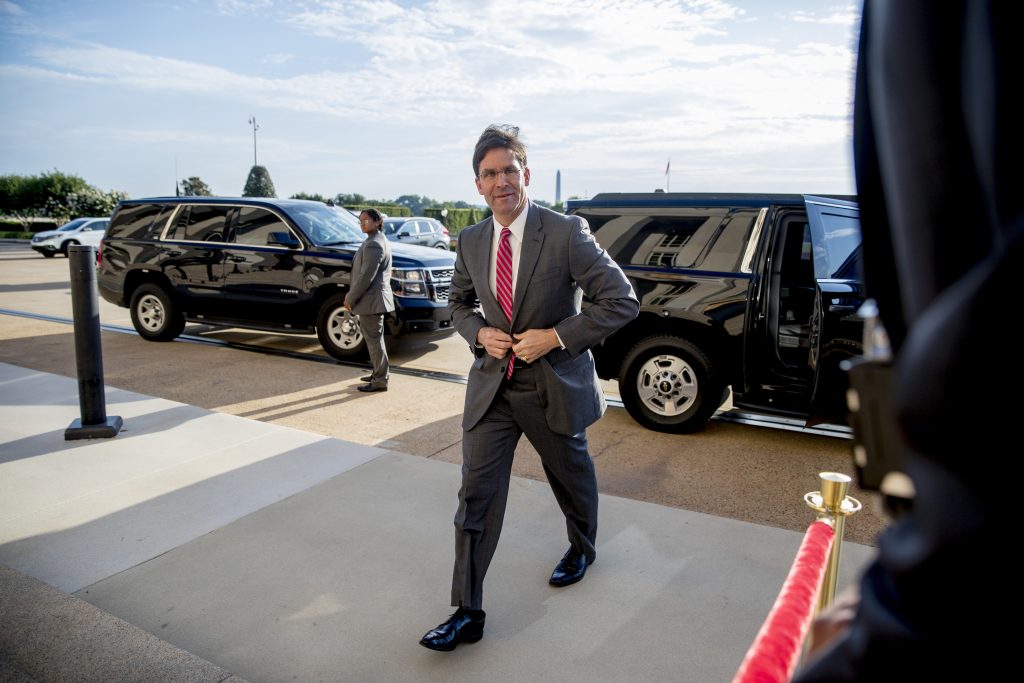 With barely one day on the job, Acting Defense Secretary Mark Esper is heading to Europe to try to persuade reluctant and increasingly wary NATO allies to work with the Trump administration on Iran sanctions and security in the Middle East, amid worries that the U.S. and the Islamic Republic may be on a path to war.

When he steps off his plane in Brussels on Tuesday, Esper will also have to assure his international counterparts and military commanders in the region that the U.S. military is in stable and capable hands, even though President Donald Trump has had three Pentagon chiefs in the past seven months.

That’s an extraordinary mission for an interim Pentagon leader at a time of global uncertainty about a range of U.S. defense and foreign policies — not just on Iran but also on countering China and Russia, preventing a resurgence of the Islamic State group and ending the war in Afghanistan.

Just in the last week the U.S. military was poised to conduct attacks on Iranian air defense sites in retaliation for Iran’s shooting down a U.S. military surveillance drone over the Strait of Hormuz. Trump called off the attacks at the last moment, citing the likelihood of Iranian casualties, and his top diplomat, Secretary of State Mike Pompeo, flew to the Middle East to attempt to galvanize international support for tougher economic pressure on Tehran.

Esper took over at the Pentagon on Monday for Pat Shanahan, who was acting secretary for six months but quit before he was formally nominated by Trump. This is by far the longest period the Pentagon has ever gone without a Senate-confirmed secretary. Trump’s first defense chief, Jim Mattis, resigned in December in protest against Trump’s policies and what the retired four-star Marine general considered Trump’s destructive approach to allies.

By coincidence, Esper’s first major public appearance will be at NATO, the alliance that Trump has frequently criticized.

The two-day NATO meeting of defense ministers will include talks on many of the most worrisome international security topics: possible war with Iran; the ongoing conflict in Afghanistan; the continued fight against Islamic State terrorists in Syria and Iraq; and tensions with Russia. Esper, who until Sunday evening had been serving as the civilian leader of the U.S. Army, may be familiar with many of the issues but to European defense ministers he is a relative unknown.

“Expectations are really low. They are not going to expect him to be able to speak authoritatively for the president and go beyond what’s in his talking points,” said Derek Chollet, who served in senior positions at the White House, State Department and Pentagon during the Obama administration. On the other hand, the Brussels gathering allows Esper to meet many of his key counterparts in a short period of time.

Retired Navy Adm. James Stavridis, a former top NATO commander, said the long absence of a Senate-confirmed leader of the Pentagon has impact around the world, “where our most important Cabinet department is perceived as weak and without a strong leader.” He added that senior military officers will also need to see a level of stability, because the repeated use of acting secretaries “erodes the principle of civilian control of the military.”

State Department officials said Monday the administration wants to enlist the help of a wider range of countries to monitor potential threats to commercial shipping in and near the Persian Gulf. This follows allegations — denied by Iran — that Tehran was behind recent attacks on commercial tankers in the Gulf of Oman.

At NATO headquarters, Esper will face the task of explaining the U.S. strategy of compelling Iran through economic pressure to renegotiate the nuclear deal that Trump pulled out of last year. Trump wants a broader deal that would limit other Iranian behavior, including its support for terrorist groups and its buildup of ballistic missiles. Tehran, however, has said it will not negotiate as long as the U.S. keeps up its sanctions, which Trump intensified Monday by signing an executive order targeting Iran’s supreme leader and his associates with financial penalties.

On the first day in his new role, Esper wrote in a message to all Pentagon employees that the transition from Shanahan does not signal a change in strategic priorities, which remain the same: make the military better prepared for combat, strengthen international alliances, and improve the Pentagon’s business practices.

“It’s actually fortuitous that on the first week the new acting secretary is on the job that he will be able to have face-to-face conversations with all his counterparts in the alliance,” she said. “We come with a message of continuity, that a personnel transition does not mean a change in policy, particularly no change in U.S. adherence and devotion to NATO.”

Wheelbarger said Esper will bring the allies up to date on the situation with Iran, including the intelligence information that prompted the U.S. to send an aircraft carrier and other military assets to the Gulf region in early May in response to what it called heightened Iranian threats.