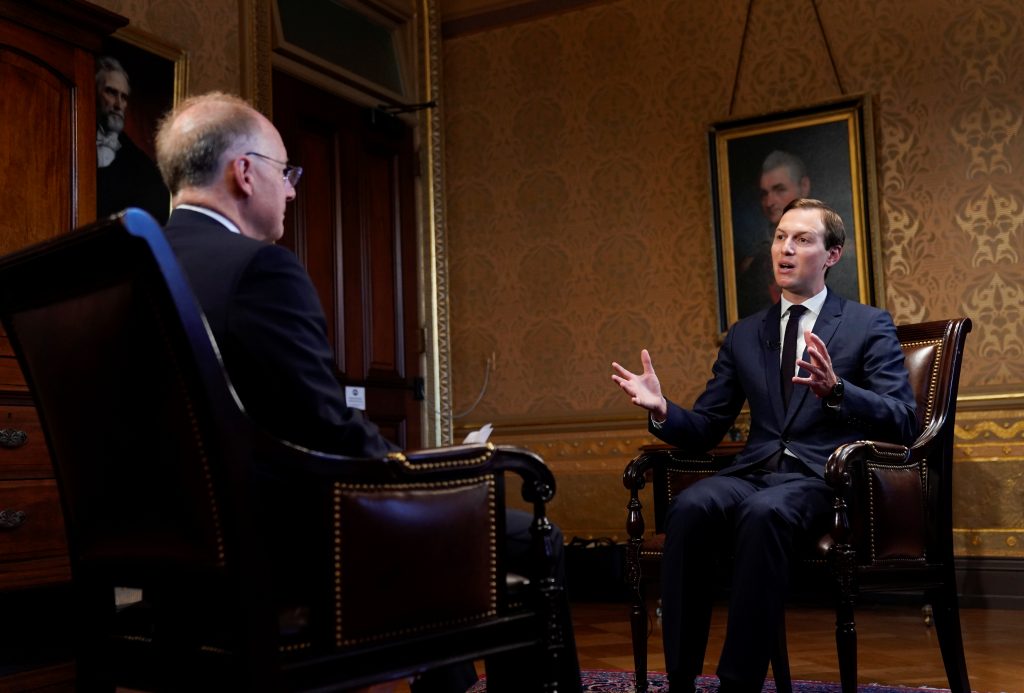 The White House on Saturday outlined a $50 billion Middle East economic plan that would create a global investment fund to lift the Palestinian and neighboring Arab state economies, and fund a $5 billion transportation corridor to connect Yehudah and Shomron and Gaza.

The “peace to prosperity” plan, set to be presented by White House senior adviser Jared Kushner at an international conference in Bahrain next week, includes 179 infrastructure and business projects, according to details of the plan and interviews with U.S. officials. The approach toward reviving the moribund Israeli-Palestinian peace process was criticized by the Palestinians on Saturday.

The ambitious economic revival plan, the product of two years of work by Kushner and other aides, would take place only if a political solution to the region’s long-running problems is reached.

More than half of the $50 billion would be spent in the economically troubled Palestinian territories over 10 years while the rest would be split between Egypt, Lebanon and Jordan. Some of the projects would be in Egypt’s Sinai peninsula, where investments could benefit Palestinians living in adjacent Gaza, a crowded and impoverished coastal enclave.

The plan also proposes nearly a billion dollars to build up the Palestinians’ tourism sector, a seemingly impractical notion for now given the frequent flare-ups between Israeli forces and terrorists from Hamas-ruled Gaza, and the tenuous security in Yehudah and Shomron.

The Trump administration hopes that wealthy Gulf states and nations in Europe and Asia, along with private investors, would foot much of the bill, Kushner told Reuters.

“The whole notion here is that we want people to agree on the plan and then we’ll have a discussion with people to see who is interested in potentially doing what,” Kushner told Reuters.

The unveiling of the economic blueprint follows two years of deliberations and delays in rolling out a broader peace plan between Israelis and Palestinians. The Palestinians, who are boycotting the event, have refused to talk to the Trump administration since it recognized Jerusalem as the Israeli capital in late 2017.

Veteran Palestinian negotiator Hanan Ashrawi dismissed the proposals on Saturday, saying, “These are all intentions, these are all abstract promises,” and said only a political solution would solve the conflict.

Kushner made clear in two interviews with Reuters that he sees his detailed formula as a game-changer, despite the view of many Middle East experts that he has little chance of success where decades of U.S.-backed peace efforts have failed.

“I laugh when they attack this as the ‘Deal of the Century,'” Kushner said of Palestinian leaders who have dismissed his plan as an attempt to buy off their aspirations for statehood. “This is going to be the ‘Opportunity of the Century’ if they have the courage to pursue it.”

Several Gulf Arab states, including Saudi Arabia, will also participate in the June 25-26 U.S.-led gathering in Bahrain’s capital, Manama, for Kushner’s rollout of the first phase of the Trump peace plan. Their presence, some U.S. officials say privately, appears intended in part to curry favor with Trump as he takes a hard line against Iran, those countries’ regional arch-foe.

The White House said it decided against inviting the Israeli government because the Palestinian Authority would not be there, making do instead with a small Israeli business delegation.