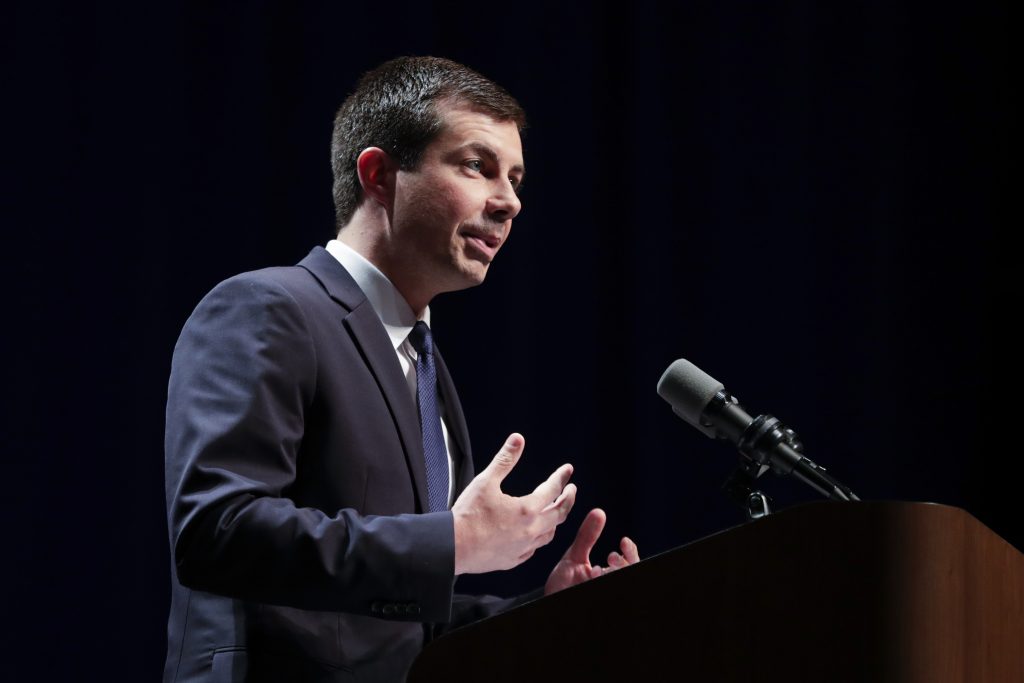 Pete Buttigieg, the 37-year-old mayor of South Bend, Indiana, and rising Democratic presidential candidate, provided a fuller picture on Tuesday of his worldview, casting himself as a “product of the 9/11 generation” and a veteran who is prepared to provide an alternative to President Donald Trump’s combative nationalism.

While Buttigieg offered a sharp critique of Trump’s “trade wars,” “tantrums” and “foreign policy by tweet,” he also warned Democrats that they must offer voters a new vision for a nation and fast-changing world that does not “turn the clock back to the 1990s” – a nod of sorts toward his older rivals in the Democratic field, such as former Vice President Joe Biden.

“It has been difficult to identify a consistent foreign policy in the Democratic Party,” Buttigieg said of his party’s drift over the past two decades. Solving vexing issues in the China relationship, Buttigieg added, means the United States “can’t stick to a 20th-century strategy.”

For Buttigieg, it was both an introduction and an overture – an introduction of his policy vision for voters who know him only as a sudden star in Democratic politics who hails from the industrial Midwest. And it was an overture to voters who may be looking for a return to a mainstream Democratic approach in the wake of Trump, with an emphasis on traditional alliances and collective projects.

Buttigieg’s alignment wasn’t so much hawkish or dovish, but pragmatic in tone and internationalist in spirit, driven by generational concerns and reluctant to offer U.S. military intervention to hot spots.

“I believe that the next three or four years will determine the next 30 or 40,” Buttigieg said, speaking in a dark suit before American flags in Bloomington, Indiana. “I do not aspire to deliver a full Buttigieg doctrine today, but I will illustrate how my administration would manage global issues.”

Buttigieg said he is not an isolationist, but he wants to see more congressional involvement in decisions of war and intervention abroad. He said his view on this front has been deeply shaped by his own experiences in recent decades, from watching the World Trade Center collapse as a college student to when he served as a naval intelligence officer in Afghanistan.

It is time, Buttigieg said, to “put an end to endless war” and for Congress to be an active participant on U.S. troop authorization. He called for an overhaul of the sweeping war powers that have been asserted by the executive branch after the 9/11 attacks.

“The lesson of the Iraq disaster,” Buttigieg said, speaking of the Iraq War, is that there is “nothing wrong with standing for American values,” but any military action “must be strategic and legitimate.”

Buttigieg is one of several youthful Democratic veterans seeking the White House, along with Rep. Seth Moulton of Massachusetts and Rep. Tulsi Gabbard of Hawaii.

As with many Democratic presidential contenders, Buttigieg said he would put climate change at the fore of his foreign policy, calling it an “existential security challenge,” which drew cheers.

Buttigieg’s remarks were made at the Hamilton Lugar School of Global and International Studies at Indiana University, which is named in honor of two titans of Indiana politics: former Democratic Rep. Lee Hamilton and Republican Sen. Richard Lugar, the latter of whom died in April. Both men were known for encouraging strong relationships with U.S. allies, postwar security institutions and pursuing global initiatives.

Hamilton, 88, who served as vice chairman of the national commission that investigated the 9/11 terrorist attacks, introduced Buttigieg and praised him for his liberal values on social and economic issues.

Buttigieg connected himself to the legacies of both Lugar and Hamilton, calling the men “two Hoosiers of global consequence” and statesmen who continue to inspire him. He noted that Lugar, like him, was a former mayor in Indiana who also served as a naval intelligence officer.

Eradicating nuclear weapons – one of Lugar’s lifetime goals in the Senate – should be a priority, Buttigieg said, noting that he would “recommit” the United States to the Iranian nuclear deal that was forged by the Obama administration. The Trump administration withdrew from the pact last year.

Buttigieg, a Harvard graduate and former Rhodes scholar, is being advised on foreign policy by Doug Wilson, a former Obama administration official, among others with ties to the Obama White House, according to his campaign.

Buttigieg’s remarks came hours before Biden, who is leading the polls, was scheduled to give a scathing address on Tuesday in Iowa about Trump and his policies, including foreign policy.

“We are in a competition with China,” Biden was to say, according to prepared remarks. “We need to get tough with China.”

Buttigieg’s message on China: It should be chastised for its “authoritarian capitalism” and record on human rights, particularly China’s campaign to suppress Uighurs and members of other minority groups, mostly Muslim ones. But he does believe that China can be engaged as a partner in handling thorny issues like climate change, terrorism and international peacekeeping.

Bolstering the U.S. economy is the best way of keeping pace with China in the years to come, he said, and investments in infrastructure and education will enable the United States to “compete for the global economic future.”

Turning to Trump’s nationalism, Buttigieg said he would, as president, “repair strained relationships with European allies.” He would do so not just to be friendly with European leaders, he said, but because he believes diplomacy is more effective when it’s more than a transactional exercise.

On Russia, Buttigieg took a shot at Trump’s discussions during the 2016 campaign of a possible Trump Tower in Moscow, calling it “not a real estate opportunity but an adversarial actor.”

Beyond those words on policy, it was that line – “President Buttigieg” – that the Indiana mayor appeared to hope would be remembered on a busy Tuesday in Democratic presidential politics.

Months ago, he was a nearly unknown mayor. This week, he is speaking for nearly an hour on foreign policy, riding high in new polls and making a pitch that he is prepared to serve in the highest office.

“The world needs America to be in touch with our own communities,” Buttigieg said. “A foreign policy for 2054 must be grounded in the everyday lives of communities across the United States,” like South Bend. “In my White House, we will.”