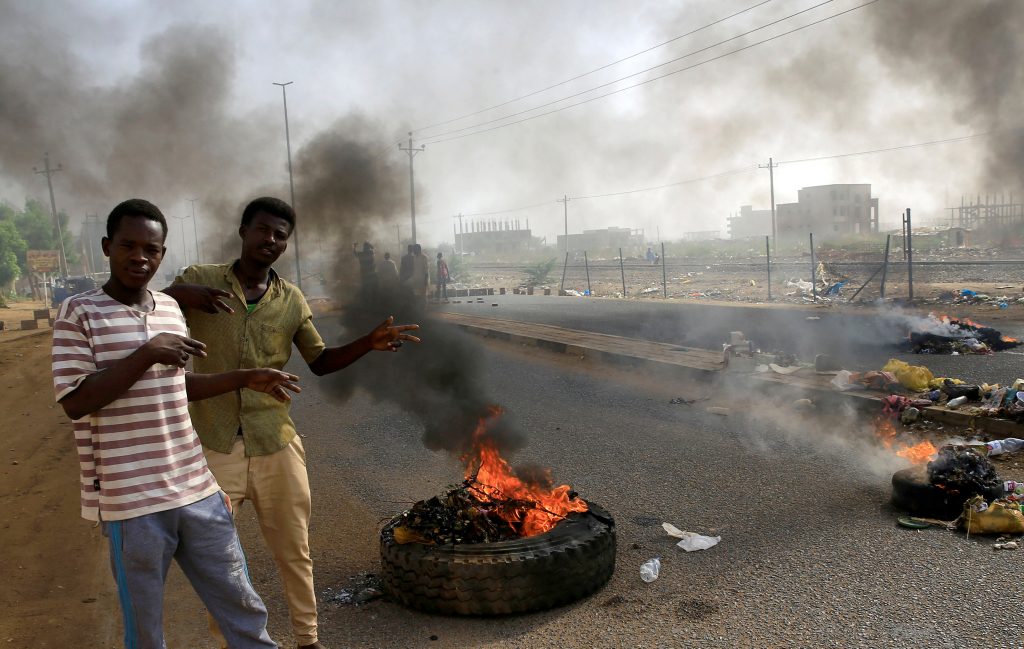 Security forces attacked the camp at the center of Sudan’s protest movement, opening fire, torching tents and killing at least 13 people in an assault Monday that swept away the months-long sit-in demanding the military yield power, witnesses and protest leaders said.

Protesters were seen in videos posted online running through streets lined with tents, heads down and ducking as the sound of gunfire filled the air. Smoke rose from the sit-in, located outside the military headquarters in the capital, Khartoum.

One video showed policemen swarming around a protester sprawled on the pavement, beating him with sticks.

The assault appeared to be a coordinated move to crush a protest movement that in April forced the military to remove Sudan’s strongman, Omar al-Bashir, after 30 years of rule — and then stayed in the streets to keep up pressure on the generals who took his place.

“This is a critical point in our revolution. The military council has chosen  escalation and confrontation,” said Mohammed Yousef al-Mustafa, a spokesman for the Sudanese Professionals’ Association, which has spearheaded the protests.

“Those are criminals who should have been treated like al-Bashir,” he said. “Now the situation is either them or us, there is no other way.”

For months, tens of thousands in the camp and other protest sites have been demanding a speedy transition to civilian rule.

Tensions have mounted as negotiations between protest leaders and military officials yielded little progress. The talks focus on the makeup of a transitional “sovereignty council” that would run the country for the next three years. Protesters demand the military have only limited involvement in the council, but the ruling generals have resisted relinquishing power.

The assault on the protest camp came a day before Muslims mark the Eid holiday ending the month-long fast of Ramadan.

Just over a week earlier, the head of the military council ruling Sudan, Gen. Abdel-Fattah Burhan, met with his two top allies, the president of Egypt and the crown prince of the United Arab Emirates. Those leaders backed al-Bashir’s removal and have thrown strong support to the military council. They are also deeply opposed in general to street movements along the lines of the 2011 Arab Spring uprisings.

The military’s only comment on the morning assault came in remarks by Shams al-Deen al-Kabashi, the military council’s spokesman.

He said the forces were targeting an area near the sit-in where authorities have alleged criminal activity takes place. He said people from there go into the main protest site, leading to clashes. He did not say if the military’s goal was to break up the entire sit-in camp.

The Sudan Doctors’ Committee said medical personnel and injured people were trapped in clinics in the area, and demanded that they be allowed to leave.

“Wounded people are lying on the ground in the reception area as there are not enough beds,” said Azza al-Kamel, a doctor at the Royal Care hospital.

Videos circulating online appeared to show protesters standing at low brick barricades in the street, then being driven back by walls of blue-clad security forces carrying sticks.

Hundreds of people were arrested, according to al-Zein and another activist, Hisham Shalabi. Photos posted online from the scene showed dozens of men and women lined up on the pavement, sitting or lying face down, under guard by troops, apparently under arrest.

The breakup of the sit-in threatens to escalate the struggle between the protesters and the military to a new, more volatile level.

Until now, negotiations over the transition had kept a tenuous level of peace. But after Monday’s attack, protest leaders suspended the talks with the military council and called for a general strike and “total civil disobedience.”

The Forces for Declaration of Freedom and Change, which represents the protesters in the negotiations, called for toppling the military council and urged people to take to the streets in protest.

The embassies of the United States and Britain expressed concern about reported attacks on civilians.

The U.S. Embassy in Sudan called on Sudanese security forces to stop what it said were “attacks against protesters and other civilians.” The embassy said via social media that apparent attempts to move against the protest camp in the capital are “wrong” and that it holds the country’s Transitional Military Council responsible for the attacks.

Ifran Siddiq, the British ambassador in Sudan, said he is “extremely concerned” by the heavy gunfire he had heard from his official residence in Khartoum and the reports that Sudanese security forces were attacking the protest sit-in site. “No excuse for any such attack,” he said on Twitter.