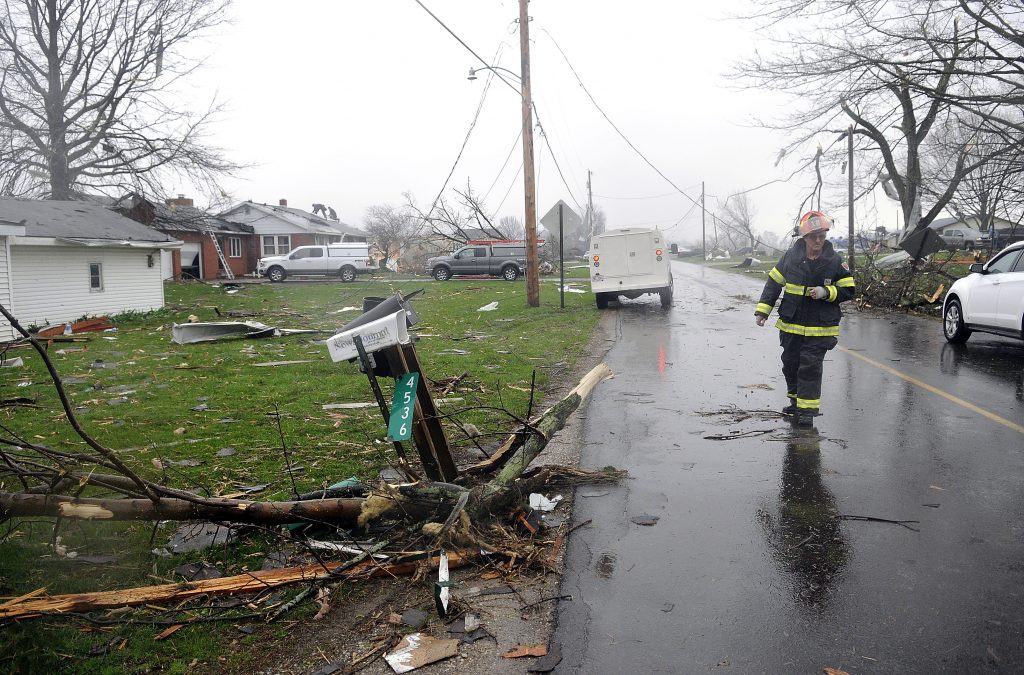 Tornadoes, wind gusts of up to 70 mph and pounding hail remained threats early on Monday from eastern New York and into New England, as the remnants of a deadly storm push out to sea, the National Weather Service said.

More than 79,000 homes and businesses were without power in Virginia, according to the tracking site PowerOutage.US, with 89,000 more outages reported across Pennsylvania, North Carolina, Michigan, Maryland and New York.

The affected areas will get heavy rains, winds with gusts of up to 70 mph and the possibility of hail, NWS Weather Prediction Center in Maryland said.

“This is an ongoing threat,” said Brian Hurley from the Center.

“There are short spin-ups, pockets of heavy rain and damaging winds that can still hit before this pushes offshore.”

The weekend’s storm brought tornadoes that killed at least five people, including three children, in the U.S. South, officials said.

The massive storm system sped from Texas eastward with dozens of twisters reported as touching down across the South from Texas through Georgia into Pennsylvania.

Nearly 2,300 U.S. flights were canceled by Sunday evening, more than 90 percent of them at airports in Chicago, Illinois; Houston, Texas; Charlotte, North Carolina; Pittsburgh, Pennsylvania; Columbus, Ohio and a dozen major airports on the Eastern Seaboard, according to FlightAware.com.

But no major flight delays were reported on the East Coast before 6 a.m. Monday.

The storm’s cold front brought snow to Chicago on Sunday, with 1 to 3 inches reported in central Illinois.

Two children, siblings aged three and eight, were killed on Saturday when a tree fell on the car in which they were sitting in Pollok, Texas, said a spokeswoman for the Angelina County Sheriff’s Department.

In another storm death nearby, an unidentified victim’s body was trapped in a vehicle submerged in floodwaters in Calhoun, Louisiana, Springfield said.

In Mississippi, Governor Phil Bryant said one person was killed and 11 injured over the weekend as tornadoes ripped through 17 counties and left 26,000 homes and businesses without electricity.

In addition, three people were killed when a private jet crashed in Mississippi on Saturday, although Bryant said it was unclear whether it was caused by the weather.

Soaking rains could snarl the Monday morning commute on the East Coast before the storm moves off to sea.

“The biggest impact rush hour-wise probably will be Boston, around 7 to 8 o’clock in the morning, and around New York City around 5 or 6 o’clock, before sunrise,” NWS meteorologist Bob Oravec said.