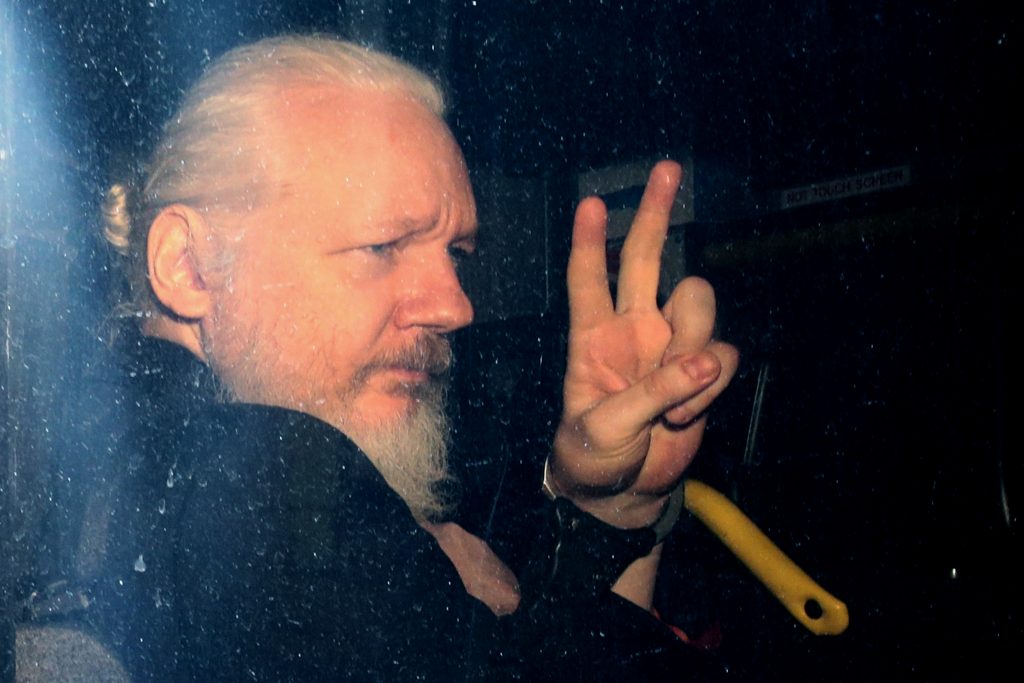 U.S. prosecutors announced charges on Thursday against WikiLeaks founder Julian Assange, accusing him of conspiring with former Army intelligence analyst Bradley Manning to gain access to a government computer as part of one of the largest compromises of classified information in U.S. history.

Assange, arrested by British police and carried out of Ecuador’s embassy in London, faces up to five years in prison on the American charge, the U.S. Justice Department said in a statement. His arrest paved the way for his possible extradition to the United States.

It was triggered in part by WikiLeaks’ 2010 publication of hundreds of thousands of U.S. military reports about the wars in Afghanistan and Iraq and American diplomatic communications, a disclosure that embarrassed Washington and caused strained relations with allies.

The Justice Department said Assange, 47, was arrested under an extradition treaty between the United States and Britain and was charged with conspiracy to commit computer intrusion.

The indictment, filed in March 2018 and unsealed on Thursday, said Assange in March 2010 engaged in a conspiracy to help Manning crack a password stored on Defense Department computers connected to the Secret Internet Protocol Network (SIPRNet), a U.S. government network used for classified documents and communications.

Manning had access to the computers as an intelligence analyst and was using them to download classified records to transmit to WikiLeaks, the Justice Department said. Cracking the password would have enabled Manning to log on under a username other than his own, making it harder for investigators to determine the source of the illegal disclosures, it said.

Manning was jailed on March 8 after being held in contempt by a judge in Virginia for refusing to testify before a grand jury in what is widely believed to be related to the Assange investigation.

Manning was convicted by court-martial in 2013 of espionage and other offenses for furnishing more than 700,000 documents, videos, diplomatic cables and battlefield accounts to WikiLeaks while he was an intelligence analyst in Iraq. Obama commuted the final 28 years of Manning’s 35-year sentence.

“Journalists around the world should be deeply troubled by these unprecedented criminal charges,” Barry Pollack, a lawyer for Assange, said in a statement, saying the allegations “boil down to encouraging a source to provide him information and taking efforts to protect the identity of that source.”

A law enforcement official close to the case refused to discuss whether additional charges could be filed against Assange.

Mark MacDougall, a former federal prosecutor, said on Thursday he believes the government’s case against Assange looks like a “placeholder indictment.”

“They had to thoroughly investigate the Manning case,” he said. “I think what you are seeing in this short indictment is a small sample of the fruit of that investigation.”

Special Counsel Robert Mueller scrutinized the actions of WikiLeaks in his 22-month investigation into Russia’s role in the 2016 U.S. election. The website published emails damaging to Democratic presidential candidate Hillary Clinton that Mueller and U.S. intelligence agencies have said were stolen by Russia in a bid to boost Republican Donald Trump’s candidacy.

The Obama administration decided not to prosecute WikiLeaks and Assange on the grounds that the website’s work was too similar to journalistic activities protected by the U.S. Constitution’s guarantee of freedom of the press.

The indictment quoted from a conversation in which Assange encouraged Manning to provide more information: Manning told Assange that “after this upload, that’s all I really have got left,” with Assange replying that “curious eyes never run dry in my experience.”

WikiLeaks has faced criticism from U.S. officials including Secretary of State Mike Pompeo, who when he was CIA director in 2017 called Assange a “fraud” and WikiLeaks a “hostile intelligence service often abetted by state actors like Russia.”

But Trump praised the website during the presidential campaign. At a rally shortly before the election, Trump said “I love WikiLeaks” after it released the hacked Democratic emails that harmed Clinton’s candidacy.

Assange, who took refuge in Ecuador’s embassy in 2012 to avoid extradition to Sweden, has said he did not know the source of Democratic Party-related emails WikiLeaks published before the election, but said he did not get them from Russia.