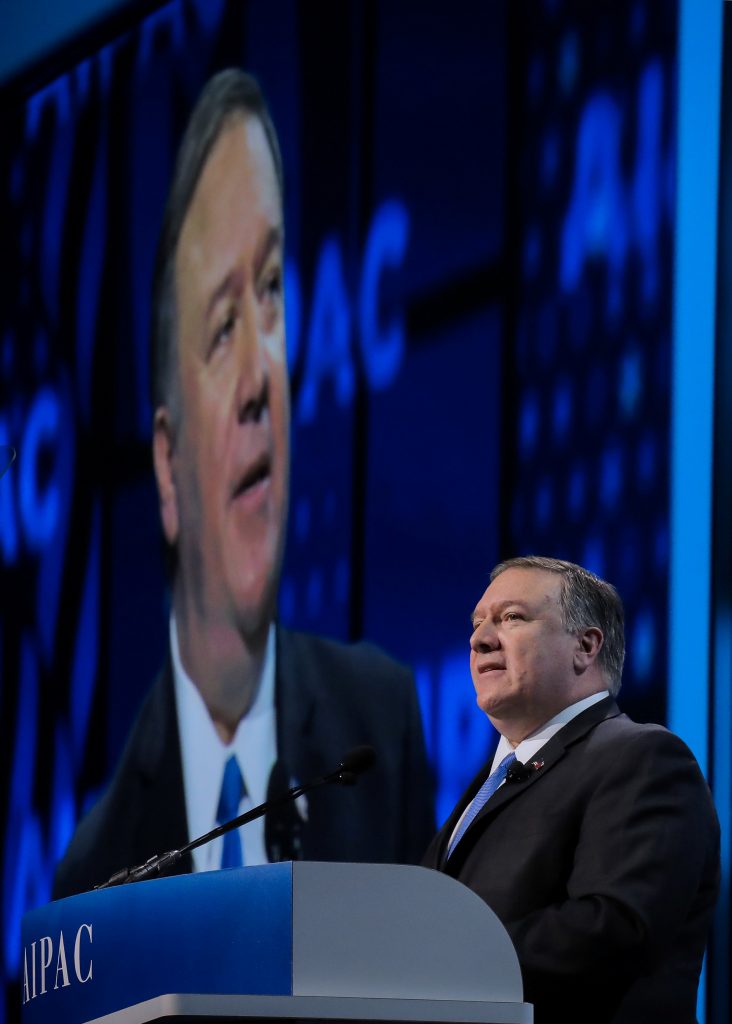 Secretary of State Mike Pompeo sought to discourage any extrapolations on President Donald Trump’s proclamation recognizing Israel’s claim to the Golan Heights, saying it could not be used as a precedent.

At a press briefing on Tuesday, Pompeo was asked by a reporter whether President Trump’s decision sets “a precedent that powerful countries can actually overtake land over international law?”

“The answer is absolutely not,” Pompeo replied. “This is an incredibly unique situation. Israel was fighting a defensive battle to save its nation [when it conquered the plateau in 1967], and it cannot be the case that a U.N. resolution is a suicide pact.”

Earlier on Tuesday, a senior Israeli official (identified as Prime Minister Binyamin Netanyahu) was quoted as saying that the Golan proclamation demonstrates “one important principle in international relations: When you start wars of aggression, and lose territory, don’t come back and claim it later. It belongs to us.”

Speaking at the AIPAC conference in Washington on Tuesday, the secretary of state said the U.S. didn’t change its policy regarding territories seized in defiance of international law, but are insisting that Israel’s annexation of the Golan was a justified exception to the rule.

International law prohibits the annexation of territories captured in war except in cases of mutual agreement. The law was designed to keep nations from starting wars of territorial expansion.

“Our position on the status of the Golan Heights is well-known, and we would like to make clear that this position has not changed,” declared Germany, France, the U.K., Poland and Belgium.

“In line with international law, and relevant Security Council resolutions, notably resolutions 242 and 497, we do not recognize Israel’s sovereignty over territories occupied by Israel since June 1967… and we do not consider them to be part of the territory of the State of Israel,” they were quoted as saying by Haaretz.

Suggesting that it could indeed establish a precedent, they said further: “We raise our strong concerns about broader consequences of recognizing illegal annexation and also about the broader regional consequences.”

Analysts have expressed fears that Trump’s recognition could lead to recognition of other territories captured in war, including Russia’s recent takeover of Crimea.