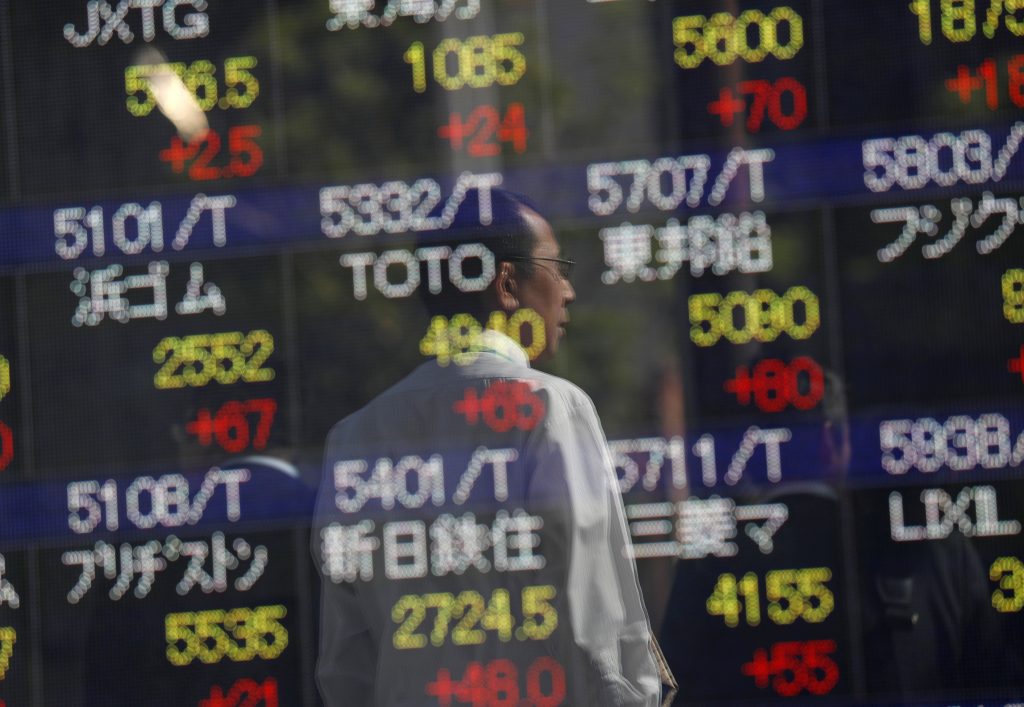 Asian shares drifted higher on Tuesday after two days of losses as U.S. 10-year Treasury yields edged up, but the outlook remained murky as investors weighed the odds of whether the U.S. economy is in danger of slipping into recession.

European and U.S. equity markets were expected to follow Asia’s lead, spread-betters showed, with London’s FTSE futures up 0.3 percent and E-minis for the S&P 500 tacking on one-third of a percent.

Australian shares were flat, while Japan’s Nikkei jumped 2.1 percent after recording its biggest drop since late December on Monday.

Wall Street shares were little changed on Monday with the S&P 500 ending with a small loss of 0.08 percent.

Investors have been spooked by sharp falls in U.S. bond yields and an inversion of the U.S. Treasury yield curve, which is widely seen as an indicator of an economic recession.

It has fallen about 17.5 basis points since the Federal Reserve last week ditched projections for raising rates this year and announced the end of its balance sheet reduction, citing signs of an economic slowdown.

“This is not a healthy sign, as bond-market watchers should know and equity-market obsessives should rapidly learn,” he said in a note. “How much further will this run before we see markets starting to do the same?”

The 10-year yield fell below the yield for three-month bills on Friday for the first time since 2007, inverting the yield curve.

San Francisco Fed researchers have said that the difference in those two maturities was the most useful for forecasting a recession.

“I think the market has overreacted to the yield curve inversion because the San Francisco Fed has said it is the most reliable indicator,” said Hiroshi Nakamura, senior manager of investment planning at Mitsui Life.

“I expect some correction to the latest rally in bonds. For now we have to see this week’s auctions,” he said.

Investors will also be watching Fed policymakers scheduled to speak on Tuesday.

U.S. economic growth could be “pretty weak” in the first quarter but will likely be much closer to 2-2.5 percent for the rest of the year, but a central bank pause is the responsible thing to do, Fed Bank of Boston president and CEO Eric Rosengren said at a conference in Hong Kong.

Fed funds rate futures are now fully factoring in a rate cut later this year, with about an 80-percent chance of a move priced in by September.

In the currency market, the fall in U.S. yields undermined the dollar’s yield attraction.

The euro stood at $1.1305, having gained a tad on Monday after Germany’s IFO Institute said its business climate index rose to 99.6, beating a consensus forecast of 98.5 and ending six consecutive months of decline.

“While dollar/yen hasn’t fallen greatly and things aren’t in panic mode, a sense of caution about where things are going has taken hold,” said Shusuke Yamada, chief Japan currency and equity strategist at Bank of America Merrill Lynch.

The British pound stood at $1.3180, erasing small gains made after lawmakers voted to wrest control of the Brexit process from Prime Minister Theresa May’s government for a day.

May said on Monday there was not yet enough support to put her Brexit deal to a third vote in Parliament.

Oil prices hovered below their recent four-month peaks, as the prospect of tighter U.S. crude supply was offset by concerns about a slowdown in global economic growth.

U.S. crude futures traded at $59.26 per barrel, up three-quarters of a percent on the day, a tad below Thursday’s high of $60.39, its highest since mid-November.