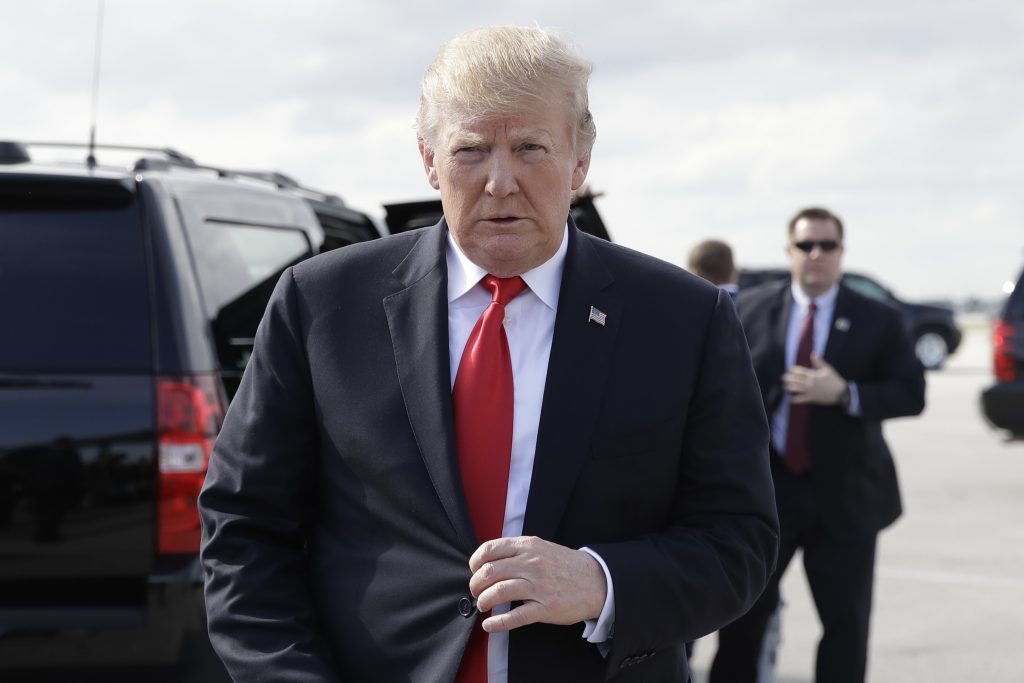 Breaking his silence on the special counsel investigation, President Donald Trump celebrated a summary of the findings Sunday, claiming it “was a complete and total exoneration,” even though the report did not reach a definitive answer on whether he obstructed justice.

Trump spoke to reporters before boarding Air Force One in Palm Beach, saying “it was just announced there was no collusion with Russia. … There was no obstruction, and none whatsoever.”

The president’s comments came after the Justice Department said that special counsel Robert Mueller’s investigation did not find evidence that Trump’s campaign “conspired or coordinated” with Russia to influence the 2016 presidential election. The four-page summary by Attorney General William Barr said Mueller’s report “does not exonerate” the president on obstruction and instead “sets out evidence on both sides of the question.”

Trump’s victory lap came after he kept a low profile over the weekend, heeding the advice of his lawyers, who warned him against tweeting about the probe before details were released. But on Sunday night he signaled that he was eager to go on the offensive against the probe that has shadowed his presidency.

White House advisers and allies were equally elated, with campaign manager Brad Parscale declaring in a statement that Trump “has been completely and fully vindicated by Special Counsel Robert Mueller.”

For their part, Democrats called for Mueller’s full report to be released and vowed to press on with their own investigation, setting up future clashes with the White House.

Before the summary was released, Trump, who spent the weekend golfing and relaxing with his family, was said to be relieved and happy that Robert Mueller’s probe ended without any new indictments , according to people close to the White House.

The president notably dialed back his high-octane Twitter account over the weekend. Early Sunday morning, he tweeted: “Good Morning, Have A Great Day!” and “MAKE AMERICA GREAT AGAIN!” The relative silence stood in contrast with the previous weekend, when Trump unleashed more than 50 tweets, many scathing attacks on the investigations that imperiled his presidency.

The president has railed against Mueller for months, calling the investigation a politically motivated “witch hunt.” The inquiry focused on whether Trump’s campaign coordinated with Russia during the 2016 campaign, as well as whether the president tried to obstruct the probe.

A larger pack of aides than normal — including press secretary Sarah Sanders — traveled with Trump to Mar-a-Lago to manage any fallout. Trump was briefed on what his supporters would say on media throughout the weekend; aides hoped the president might stay quiet if he felt his messages were getting out even if he wasn’t delivering them himself.

White House officials were cautious about declaring victory or getting ahead of the details, said a person familiar with White House thinking, who like others, insisted on anonymity because they were not authorized to discuss the matter publicly. Trump allies like Republican Reps. Mark Meadows and Jim Jordan handled interviews over the weekend, while White House officials were expected to speak more during the week.

Trump spent the weekend surrounded by aides, friends and family, including son Donald Trump Jr., who was at the Florida estate for spring break with their children. Trump’s eldest son was out fishing with his children when the report was delivered.

The president and first lady Melania Trump celebrated their son Barron’s 13th birthday with dinner on the patio of Mar-a-Lago on Friday night. Trump also attended a GOP dinner that night and basked in the applause of hundreds of dressed-to-the-nines attendees.

He spent Saturday golfing in temperatures that hit the 80s, and headed back to his golf club again on Sunday. Trump also spent time on the phone with trusted confidants.

The president’s low-key approach was a marked shift from his posture in recent days. Beginning last weekend, he unleashed a storm of tweets that were unusually harsh and varied, even by Trump’s standards.