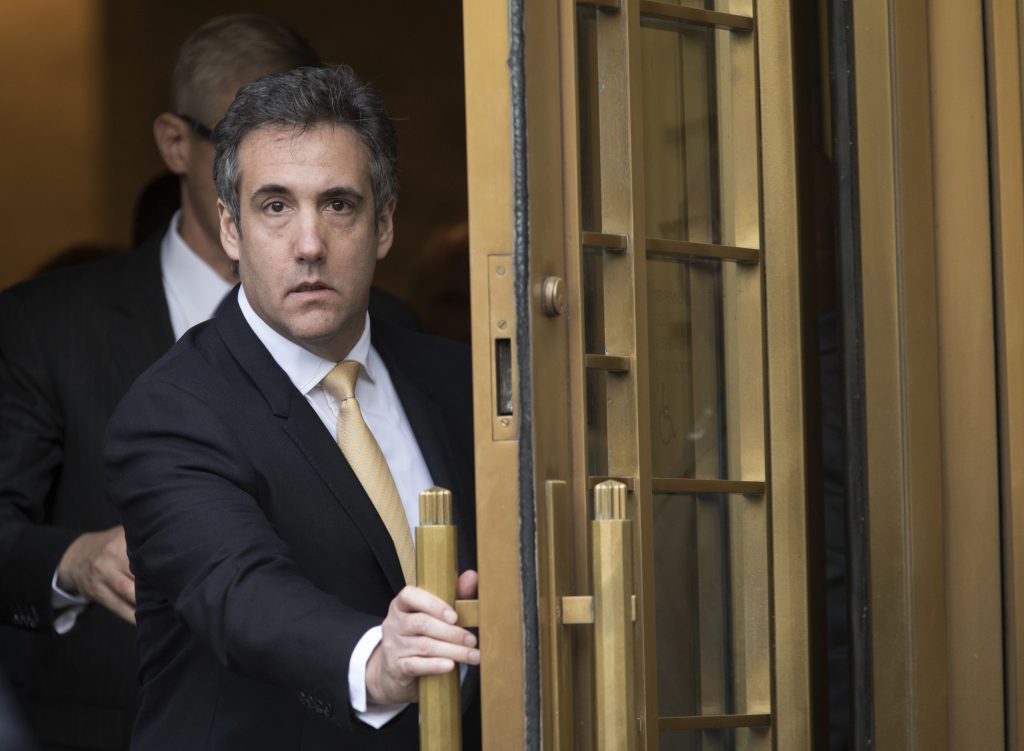 The series of heavily redacted search warrant applications and other documents revealed new details about the timing and depth of the probe into Cohen, who ultimately pleaded guilty to tax fraud, bank fraud, campaign finance violations and lying to Congress.

The records show the inquiry into Cohen had been going on since July 2017 — far longer than previously known— and that a big part of its focus was Cohen’s taxi businesses and misrepresentations he made to banks as part of a scheme to relieve himself of some $22 million in debt he owed on taxi medallion loans.

Prosecutors were also interested in money that was flowing into Cohen’s bank accounts from consulting contracts he’d signed after Trump won office. Some of those payments were from companies with strong foreign ties, including a Korean aerospace company and Columbus Nova, an investment management firm affiliated with Russian billionaire Viktor Vekselberg.

Cohen was ultimately not charged with failing to register as a foreign agent.

Many sections of the records dealing with the campaign-finance violations Cohen committed when he paid hush money were redacted. A judge ordered those sections to remain secret after prosecutors said they were still investigating campaign finance violations.

Lanny Davis, an attorney for Cohen, said the release of the search warrant “furthers his interest in continuing to cooperate and providing information and the truth about Donald Trump and the Trump organization to law enforcement and Congress.”

The FBI raided Cohen’s Manhattan home and office last April, marking the first public sign of a criminal investigation that has threatened Trump’s presidency and netted Cohen a three-year prison sentence he’s scheduled to start serving in May. The agents who also scoured Cohen’s hotel room and safe deposit box, seized more than 4 million electronic and paper files in the searches, more than a dozen mobile devices and iPads, 20 external hard drives, flash drives and laptops.

Both Cohen and Trump cried foul over the raids, with Cohen’s attorney at the time calling them “completely inappropriate and unnecessary” and the president taking to Twitter to declare that “Attorney-client privilege is dead!”

A court-ordered review ultimately found only a fraction of the seized material to be privileged.

Tuesday’s release of the search warrant came nearly six weeks after U.S. District Judge William H. Pauley III partially granted a request by several media organizations, including The Associated Press, that the search warrant be made public due to the high public interest in the case.

David E. McCraw, vice president and deputy general counsel for The New York Times, said he was hopeful Pauley would approve the release of additional materials in May after the government updates the judge on its investigation.

“The documents are important because they allow the public to see firsthand why the investigation was initiated and how it was conducted,” McCraw said in an email.

The judge acknowledged prosecutors’ concerns that a wholesale release of the document “would jeopardize an ongoing investigation and prejudice the privacy rights of uncharged third parties,” a ruling that revealed prosecutors are still investigating the campaign-finance violations.

The judge ordered prosecutors to redact Cohen’s personal information and details in the warrant that refer to ongoing investigations and several third-parties who have cooperated with the inquiry. But he authorized the release of details in the warrant that relate to Cohen’s tax evasion and false statements to financial institutions charges, along with Cohen’s conduct that did not result in criminal charges.

“At this stage, wholesale disclosure of the materials would reveal the scope and direction of the Government’s ongoing investigation,” Pauley wrote in a ruling last month.

Cohen pleaded guilty over the summer to failing to report more than $4 million in income to the IRS, making false statements to financial institutions and campaign-finance violations stemming from the hush-money payments he arranged for two people with potentially damaging information on Trump. Cohen implicated Trump in his guilty plea, saying the president directed him to make the payments during his 2016 campaign.