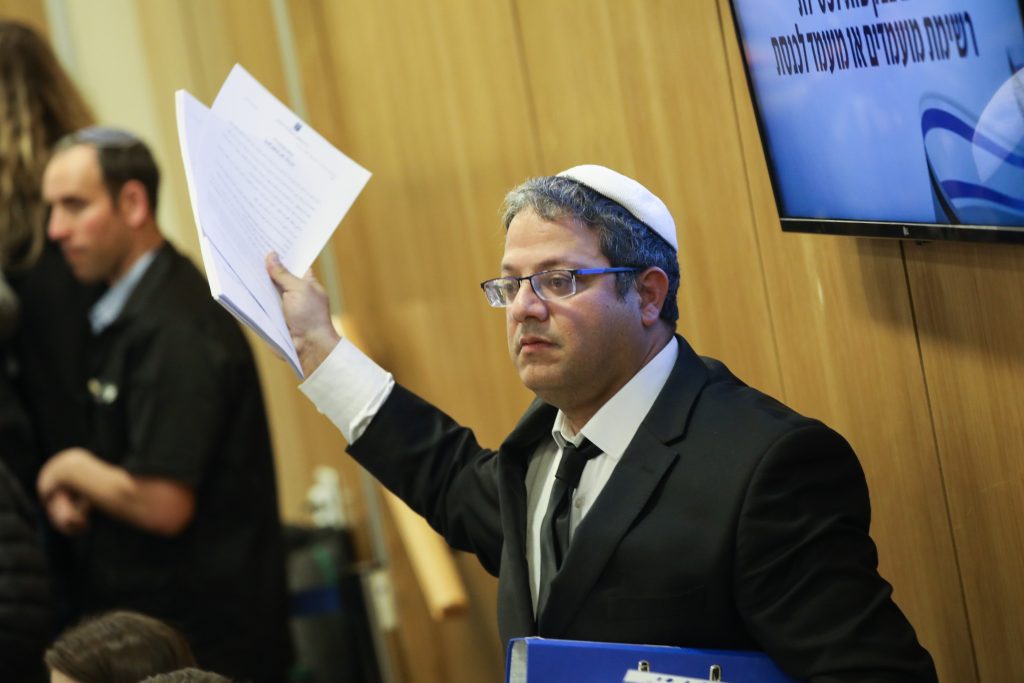 The question of the eligibility of former MK Michael Ben-Ari to participate in the current Knesset elections will likely be decided by the High Court – where he will be probably be represented by his political colleague in the Otzma Yehudit party, attorney Itamar Ben-Gvir, Hadashot News reported Wednesday.

That decision will come after a vote on Ben-Gvir’s eligibility by the Central Elections Committee, likely to take place Wednesday, after State Attorney Avichai Mandelblit recommended that Ben-Ari be banned from the election, over what he called racist comments made by Ben-Ari. In response, Ben-Ari said that the State Attorney had done “sloppy work,” and that his comments were taken out of context.

The recommendation by Mandelblit has set off a firestorm of criticism on the right, with MKs accusing Mandelblit of hypocrisy and having double standards for seeking to ban Ben-Ari, while at the same time giving a green light to Arab MKs and parties that routinely call for an end to Israel as a Jewish state. In his decision Tuesday night, Mandelblit said that Ben-Ari was guilty of “a long list of comments that show that Ben-Ari is seeking to incite against Arabs, in a manner that seeks to deepen the gap between portions of the population. Ben-Ari calls for the violent removal of the rights of Arabs, insults the Arab population, calls them things like a ‘murderous nation,’ ‘traitorous and murderous,’ people who ‘only understand power,’ and so on. Based on this it would appear that there is justification for banning Ben-Ari.”

The statement set off an immediate deluge of criticism. Otzma Yehudit responded by saying that Mandelblit’s stance “is solid proof that it is Mandelblit and his assistant, State Prosecutor Shai Nitzan, who are running this country. Just on Monday Mandelblit rejected a petition that would have banned Arab parties Balad, Ta’al and Hadash, who all consistently incite against Israel, support terror and encourage attacks on Jews. MKs on their lists say that murdering IDF soldiers and residents of Yehudah and Shomron are legitimate ‘acts of resistance’ against Israel. We hope that members of the Central Election Committee will clarify to the State Attorney that there are limit to hypocrisy.”

In his own comments Wednesday, Ben-Ari told Army Radio that his comments were taken out of context. “Hanin Zoabi, who was a passenger on the Marmara flotilla ship, he approved twice, but I am a danger to the state?” Ben-Gvir told 103 Radio that he was “disappointed that Mandelblit didn’t try to ban me as well. It appears that the reason for this ban is that the other Religious Zionist candidates in the election need to appear as if they are separate than us.” Activist Benzi Gopstein, a member of Otzma Yehudit, told Kol Chai Radio that Mandelblit was just as much a racist as Ben-Ari, since “every morning he says the brachah of shelo asani goy.”

Ben-Ari is fifth on the United Right List, the union of Otzma Yehudit, Jewish Home and National Union engineered by Prime Minister Binyamin Netanyahu. Recent polls have shown the party garnering eight or more seats in the elections.

The Central Elections Committee will vote on Mandelblit’s recommendations, with representatives of all parties voting to ban or keep Ben-Ari. According to Hadashot News, there appears to be a majority for allowing him to run – but that decision needs to be approved by the High Court. Ben-Gvir, number eight on the list, is a seasoned attorney who has argued many times before the court – and won – and he will likely represent Ben-Ari when the case comes before the court.