19 Hurt, 2 Critically, in Bronx Fire; Some Jump From Windows 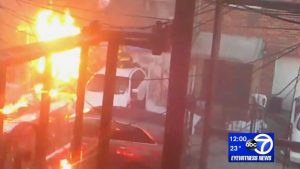 The Fire Department of New York says 19 people are injured, two of them critically, following a residential fire in the Bronx.

Some people jumped out of second- and third-story windows to escape when the fire broke out around 6 a.m. on Wednesday.

Video on WABC shows a firefighter climbing on top of a parked car to remove a woman who had landed on it.

Residents had tossed padding onto the car to cushion the blow as people jumped.

A neighborhood resident, Helene Johnson, says young children were among those going out the windows. She says people yelled, “Just jump!”

The cause of the fire was under investigation.