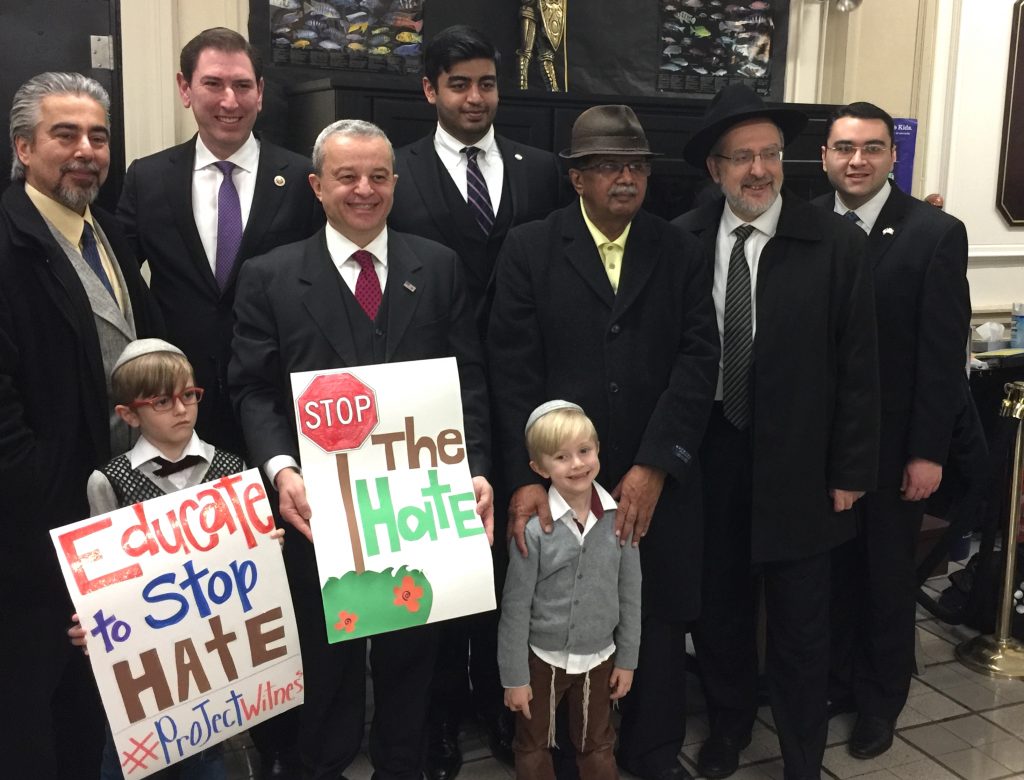 A youth-led rally against bigotry was held Sunday in Brooklyn, as anti-Semitic crimes have proliferated in New York City.

Crime statistics released by the NYPD last monthsshow a significant increase in hate crimes in the city, even while overall crime has dropped. From Jan. 1 to Feb. 3 of this year, there were 42 reported hate crimes, compared with 19 in the same period of 2018. More hate crimes were anti-Semitic – 14 out of 19 last year, 28 out of 42 in 2019 – than those against all other groups combined.

There has been a marked surge of such incidents in Brooklyn, including a spate of assaults against chassidic Jews in Crown Heights, the smashing of a Chabad House window in Bushwick, and the scrawling of swastikas on a playground in Brighton Beach.

Last Wednesday, a 12-year-old boy was charged with aggravated harassment for scrawling swastikas and “Hail Hitler” in chalk on a school playground in Queens.

The rally Sunday was held in the lobby of James Madison High School on Bedford Avenue in Brooklyn. Hosted by Councilman Chaim Deutsch, and co-sponsored by a number of state and city elected officials and organizations across a variety of communities and ethnicities, the rally was unique in that it primarily featured youthful speakers — from very young children to college students, and from a diverse representation of ethnic groups — decrying the bias attacks occurring in their city.

“Today, [we] the youth, the next generation, the future of this country, come together and we have a message: Hate will no longer be tolerated, no matter who it comes from … we will not take it,” said Sarah Vishevnik, a Jewish college student who chaired the rally.

“A crime against one religion is a crime against all New Yorkers,” declared Maria Yatif, a 9-year-old of Yemeni descent who participates at The Bridge Multicultural Project.

“Today it is the Jewish community, tomorrow it could be me, you, anyone,” said Aleena Malik of the Pakistani American Youth Organization. “Many of us experience bigotries on a daily [basis, but] when we see it we are silent because it makes us uncomfortable. But today the youth is raising its voices, because that is when we stop the hate.”

Deutsch recently co-sponsored a resolution that passed the City Council to create a new mayoral office of Hate Crime Prevention, which would be responsible for conducting outreach and education throughout the city about the impact of hatred and anti-Semitism. He said Sunday that he also hopes to introduce a bill soon that would require the city District Attorneys’ offices to report to the City Council the specific motive of each hate crime that occurs.

“It’s a lot harder to attack someone who you know, who you talk to, who you have a dialogue with,” said the DA. “And so we’re going to work together to do that and make sure that our young people actually grow up knowing their neighbors, respecting their neighbors, and loving the differences between us.”