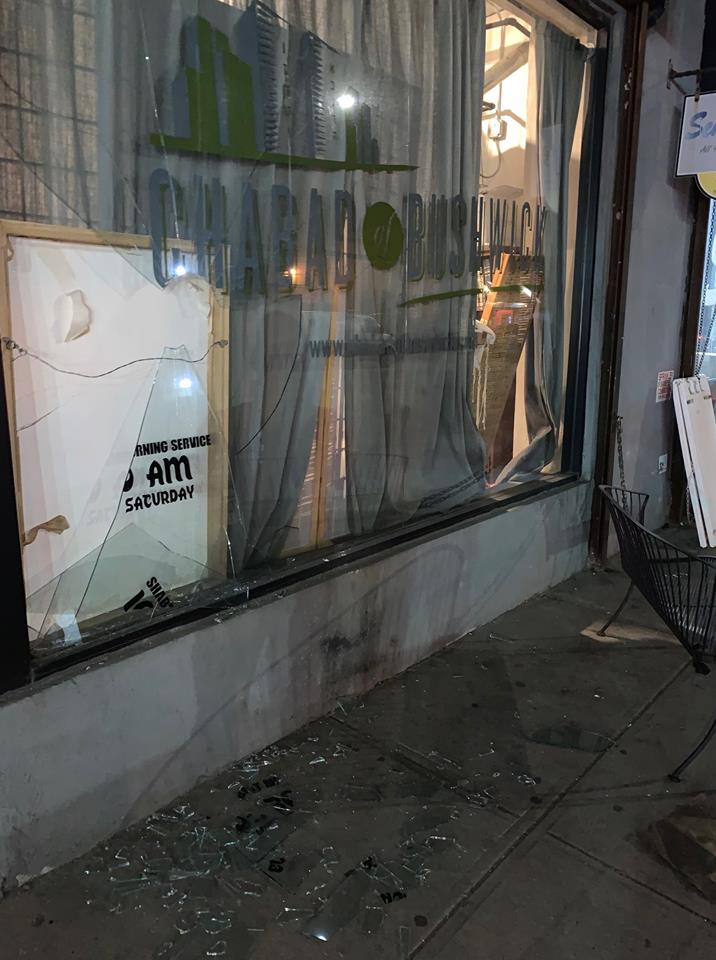 Two men smashed the front window of Chabad of Bushwick last Shabbos as a seudah was ongoing and children were playing inside, in what appears to be the latest in a string of anti-Semitic incidents in New York.

It was shortly after 2:00 a.m. Shabbos morning, as the long-running Friday night seudah, hosted by shluchim Rabbi Menachem and Mrs. Chana Heller, was nearing its end. Around 15 participants were seated around the table of the Chabad House, located in a storefront at 1087 Flushing Avenue, near Knickerbocker Avenue. The children were playing on the floor two feet from the large glass window. Mrs. Heller was holding a baby just a few feet away.

“Suddenly, we heard a really loud boom,” Rabbi Heller told Hamodia on Sunday. “It was frightening.”

“I grabbed my kids and ran behind a bookcase,” Rabbi Heller said. “I didn’t know what was going to come next.

“I peeked toward the window, and saw two black men walking – not running – away. We slowly started walking toward the door, and by the time we came out they were gone. They must have turned a corner.”

It was then that Rabbi Heller saw what had made that “boom”: the huge glass window covering the storefront was smashed. Thankfully, nobody was injured.

Rabbi Heller ran across the street toward a Dunkin’ Donuts, and asked people there to call 911.

In a statement to Hamodia, the NYPD said it does not know what object the men used to smash the window, and that this crime “is being investigated as a possible bias incident.”

Rabbi Heller told Hamodia that while he hopes it was “just a random attack by two drunk hoodlums,” he is nearly certain that this was a hate crime targeting Jews.

“There are four other shops attached to our Chabad House,” said the Rabbi. “Some were lit up just as ours was; one also had people in it – but they specifically came to ours, during the Shabbos seudah. It seems very suspicious to me.”

New York Gov. Andrew Cuomo announced Sunday that he was directing the State Police Hate Crimes Unit to assist the NYPD in its investigation into “this act of hate,” which he called “shocking and abhorrent.”

The Hellers founded the Chabad House 10 years ago. Though actually located in East Williamsburg, it primarily services Bushwick, a neighborhood that is trendy among hipsters, artists and students, including many irreligious Jews.

On Friday nights, there are typically several dozen participants at the tefillos and seudah. On Shabbos morning, there are 15-20.

“We fabreng the whole Shabbos, until havdalah,” Rabbi Heller said.

During the week, the Hellers hold classes and programs for the men and women of the community.

This incident occurred a week-and-a-half after the NYPD released statistics showing a significant increase in hate crimes, mostly anti-Semitic in nature, across New York City, even while overall crime has dropped. There has been a particular surge in assaults on Orthodox Jews in Crown Heights.

Mayor Bill de Blasio tweeted Sunday that the “NYPD is adding security to this synagogue and others nearby.”

De Blasio had spoken Thursday at a rally in Brooklyn against anti-Semitism, where he said, “it’s a very sad reality, but anti-Semitism is alive and well in this world, in this city, in this country, and it must be stamped out once and for all.”

This was the first attack of any kind on the Bushwick Chabad House.

On social media Sunday, Rabbi Heller referenced “the disturbing and increasingly frequent incidents of hate and prejudice in our New York community.”

“We encourage each other and the public to stand up against it, whenever it occurs, whatever form it takes, and towards whomever it is directed,” Rabbi Heller wrote. “An attack on one of us is an attack on all of us.

“Despite the intentions of this attack to divide and intimidate, our doors will remain as open as ever, welcoming visitors to join our growing Bushwick family.”