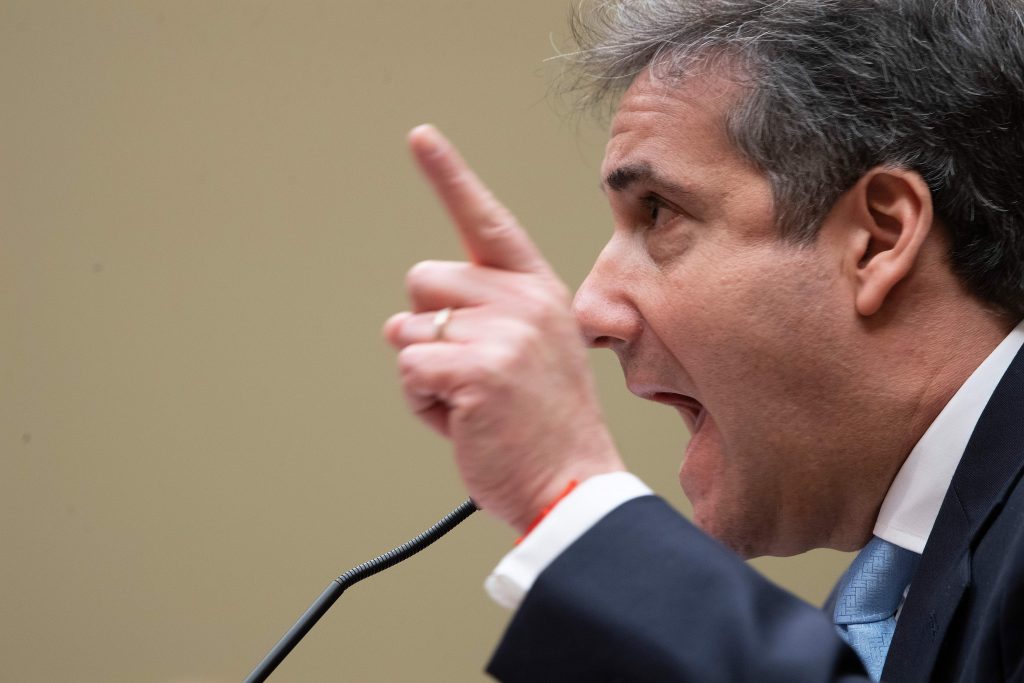 Michael Cohen, President Donald Trump’s former fixer and personal lawyer, returned to Capitol Hill on Wednesday for a House Oversight Committee hearing. Here are the highlights of his testimony so far.

– He has sparred aggressively with GOP lawmakers, who have questioned his credibility and motives for coming forward.

– He detailed how deeply and personally involved Trump was in the scheme to pay hush money.

– He described how he, like many in Trump’s orbit, had long sought to protect the president, but made clear: “I am not protecting Mr. Trump anymore.”

– He has suggested that federal prosecutors are investigating unspecified criminal allegations involving the president that have not been made public.

After a lengthy afternoon break, Cohen resumed his blockbuster testimony to the House Oversight Committee.

The committee began with an issue that Republicans had pressed earlier in the day – whether Cohen had properly disclosed to the committee contracts he has held with foreign companies.

After consulting with his lawyers, Cohen told the committee that he did not believe he was required to disclose his contracts with any foreign businesses, because a disclosure form he received asked for money from foreign governments. Cohen said he was willing to disclose his contact with a bank in Kazakhstan, which he argued was not a government entity, though it is majority-owned by the Kazakh government.

Rep. Jim Jordan of Ohio, the ranking Republican, said Cohen should also disclose his work for a Korean entity. Committee Chairman Elijah Cummings, D-Md., said he would work with Cohen on making the disclosures and that they were not “an unreasonable request.”

Trump remains in Vietnam and hasn’t responded to Cohen’s testimony aside from a morning tweet. His 2020 campaign spokeswoman, though, blasted Cohen’s credibility in a statement Wednesday afternoon.

“Michael Cohen is a felon, a disbarred lawyer, and a convicted perjurer, who lied to both Congress and the Special Counsel in a ‘deliberate and premeditated’ fashion, according to the Special Counsel’s Office,” the spokeswoman, Kayleigh McEnany, wrote. “Now he offers what he says is evidence, but the only support for that is his own testimony, which has proved before to be worthless. As noted by the Southern District of New York, Cohen’s wide array of crimes were ‘marked by a pattern of deception that permeated his professional life’ and his ‘instinct to blame others is strong.’ Prosecutors said his actions were to ensure that he would ‘profit personally, build his own power, and enhance his level of influence.’ This is the same Michael Cohen who has admitted that he lied to Congress previously. Why did they even bother to swear him in this time?”

Cohen alleged in his opening statement that he listened in on a call in July 2016 in which Roger Stone claimed to Trump he had talked with WikiLeaks founder Julian Assange, and he thus knew the organization was about to release a batch of emails.

Barry Pollack, a lawyer for Assange, denied that Stone had such a call with Assange.

“Roger Stone did not have the telephone call Michael Cohen described Stone claiming to have had with Julian Assange,” Pollack said. “It is ironic that while Stone and Cohen have both been charged with lying, and the public tries to untangle those lies, Mr. Assange apparently faces criminal charges in the Eastern District of Virginia for his role in publishing truthful information.”

Earlier in the day during Cohen’s testimony, Florida Rep. Debbie Wasserman Schultz, who chaired the Democratic National Committee when it was hacked by the Russians during the 2016 election, pressed Cohen on whether Trump was capable of “colluding” with Russia to win the 2016 election.

Cohen said, “Yes” – though he initially hesitated, noting that answering such a question would be pure speculation on his part.

“I’d rather not answer that question,” he initially said, but later agreed: “Trump’s desire to win would have him work with anyone.”

Cohen was responding to a question from Florida Rep. Debbie Wasserman Schultz, who chaired the Democratic National Committee when it was hacked by the Russians during the 2016 election.

Cohen was unable to answer the Florida Democrat’s question about whether Trump knew about the DNC hacking before it happened. But he confirmed that Trump’s children likely also knew about the Trump Organization’s attempt to build a Trump tower in Moscow during the 2016 election.

Wasserman Schultz continued: “Is it possible the whole family is conflicted or compromised with a foreign adversary in the months before the election?”

Wasserman Schultz, who resigned her DNC position following the hacking and release of internal emails, asked Cohen if he thought Trump was so desperate to win that he would collude and coordinate with Russia or a foreign power.

“It calls on so much speculation . . .” he trailed off. “Mr. Trump, he’s all about winning and will do what is necessary to win.”

He continued: “I wouldn’t use the word ‘colluding.’ Was there something odd about the back-and-forth praise with President (Vladimir) Putin? Yes. But I’m not really sure that I can answer that question in terms of collusion. I was not part of the campaign. I don’t know the other conversations Trump had with other individuals.”

Cohen had alleged – amid a stream of potentially damaging revelations about the president – that President Trump knew in advance that the anti-secrecy organization WikiLeaks planned to publish hacked Democratic National Committee emails, and he did describe the president as a “racist,” a “conman” and a “cheat.

The WikiLeaks allegation is perhaps the most explosive in the written testimony, speaking to the core of special counsel Robert Mueller’s probe into whether the Trump campaign coordinated with Russia to influence the election. Mueller already has alleged that Russian military officials hacked the emails before they were published online by groups including WikiLeaks.

In other morning testimony, Cohen provided to Congress three documents called “statements of financial condition,” which he said Trump had prepared to show potential lenders that he was worthy of a loan. Cohen said that these three statements – from 2011, 2012 and 2013 – were shown to Deutsche Bank, as Trump sought a loan to purchase a professional football team. Trump, in the end, did not buy the team.

These statements were not rigorously audited financial documents. Instead, they amounted to Trump’s own estimates about what he was worth and what he owed. Trump himself was the main source of the data.

But the 2013 statement showed something remarkable.

That year, Trump rapidly increased his own estimate of his net worth – from $4.6 billion to $8.6 billion.

The reason was not a new building or a big business success by Trump. Instead, Trump simply assigned a massive dollar value – $4 billion – to his own brand, and then counted that brand among his assets, as if it was a building or a golf course. The result was that his net worth nearly doubled.

In his statement, Cohen said that these statements were part of a pattern of Trump exaggerating his net worth, when it benefitted him.

“It was my experience that Mr. Trump inflated his total assets when it served his purposes,” Cohen said.

Rep. Jim Jordan, an Ohio Republican and the panel’s ranking Republican, made clear in his first exchange with Cohen what Republicans line of attack would be at the hearing: Cohen is a disgruntled employee, upset that he couldn’t get a job in the Trump White House.

Jordan opened his questioning of Cohen by walking the president’s former personal lawyer through a litany of wrongdoing – including tax and bank fraud – to which he has pleaded guilty, but has nothing to do with Trump. He highlighted a Twitter account that he said Cohen had created, that seemed to promote Cohen’s personal brand.

“Was that done to protect the president?” Jordan sneered.

Cohen asserted a woman at an outside firm, RedFinch, had created the account to help blow off steam during the heart of the high-stakes presidential campaign.

“We were having fun,” Cohen said.

Jordan then turned to his main line of attack.

“You worked for [Trump] for 10 years, Mr. Cohen. How long did you work in the White House?” Jordan asked.

“I never worked in the White House,” Cohen responded.

“That’s the point, Mr. Cohen, isn’t it?” Jordan asked. “You wanted to work in the White House. You didn’t get brought to the dance.”

Cohen insisted he was offered White House jobs and said he could tell a story of Trump “reaming out” chief of staff Reince Priebus because Trump wanted him to work in the White House counsel’s office.

“Mr. Jordan, all I wanted was what I got, to be personal attorney to the president,” Cohen said.

Also in earlier testimony, Cohen said “there is no doubt” in his mind that Trump was acutely aware that someone with potentially damaging information was being paid through Cohen.

He brought a series of check images with him to show how and when Trump incrementally reimbursed him for the $130,000 payment – showing that Trump was intimately involved with the scheme, even while president.

One check for $35,000, dated March 17, 2017, was issued from a trust account belonging to Trump, and signed by his son, Donald Trump Jr. Another check, dated Aug. 1, 2017, was from Trump’s personal account – and signed by the president himself.

Cohen said the payments were made directly because they were “declaratively a retainer for services that would be provided for the year of 2017.”

But “there is no retainer agreement,” he noted.

Cohen also said Wednesday that while he pursued a possible Trump Tower project in Moscow as Trump was running for president, he briefed the president’s children, Donald Trump Jr. and Ivanka Trump, on several occasions, as well as Trump himself.

In naming Ivanka and Donald Trump Jr., Cohen was clearing up a mystery in court records filed as part of his plea – which noted he had briefed Trump family members about the project but did not identify them by name. Cohen said he briefed the Trump children about 10 times, as well as reporting back to Trump every time he had a discussion about the project.

“After each communication that I had, I would report back to him,” Cohen said.

Trump has claimed in the past he had no business involvement in Russia; Cohen’s testimony takes direct aim at that. Cohen himself has pleaded guilty to lying to Congress about the matter, and he said Wednesday he did so “in furtherance of my protection of Mr. Trump.”

“I am not protecting Mr. Trump anymore,” he said.

From Hanoi, President Trump had weighed in via Twitter:

“Michael Cohen was one of many lawyers who represented me (unfortunately),” Trump wrote on Twitter. “He had other clients also. He was just disbarred by the State Supreme Court for lying & fraud. He did bad things unrelated to Trump. He is lying to reduce his prison time. Using Crooked’s lawyer!” referring to Lanny Davis, a former political operative for Hillary Clinton, whom Trump dubbed “Crooked Hillary.”