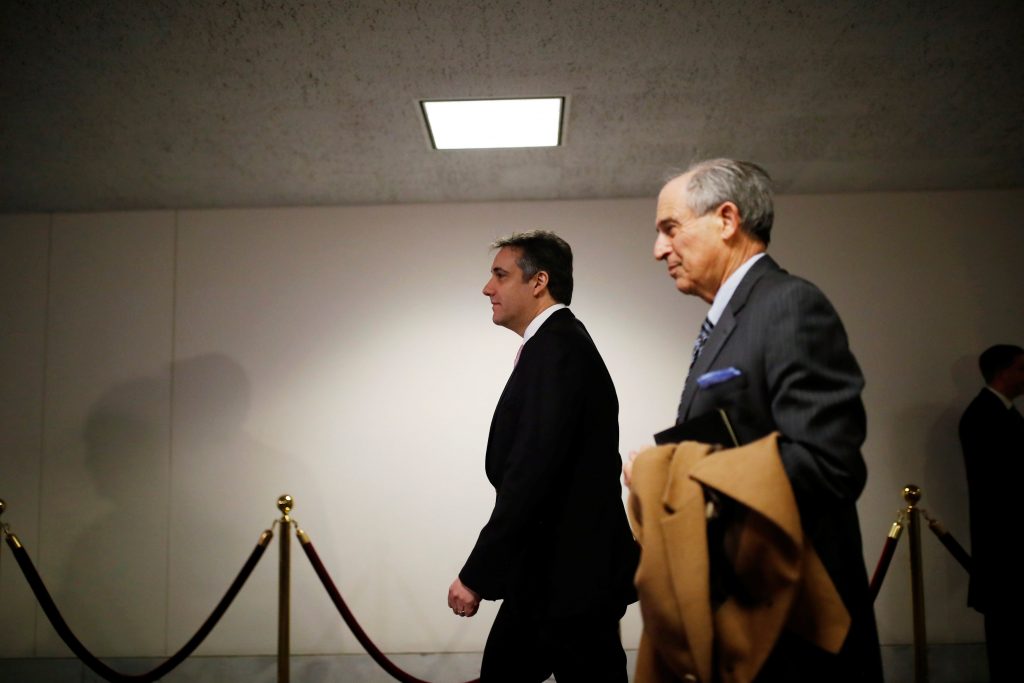 President Donald Trump’s former personal lawyer Michael Cohen will start a three-day gauntlet of congressional appearances by giving a closed-door interview to the Senate Intelligence Committee, where he is expected to detail what he claims to know about Trump’s contacts with Russians and other sensitive matters related to the president.

Senators are alternately suspicious of Cohen, who is set to serve time in prison for lying to the committee in 2017, and eager to hear what Trump’s former loyal fixer has to say after he turned on his longtime boss. Senators on the panel are expected to attend Tuesday’s meeting with Cohen, a departure from the committee’s usual practice, where witness interviews are conducted by staff only.

Senate Intelligence Committee Chairman Richard Burr told The Associated Press that senators will have staff ask questions but will be in the room to observe. He said no topics will be off limits and Cohen “should expect to get any question from anywhere about anything.”

Burr said committee members know a lot more than they did when they first interviewed Cohen, who later pleaded guilty to lying to the House and Senate Intelligence Committees about abandoning a Trump business proposal in Moscow in January 2016. Cohen has since acknowledged he continued pursuing the project for months after that.

Burr suggested that the committee will take steps to ensure Cohen is telling the truth.

“I’m sure there will be some questions we know the answers to, so we’ll test him to see whether in fact he’ll be truthful this time,” Burr said.

As a close confidant of Trump for many years, Cohen’s testimony is among the most anticipated since the House and Senate started investigating the Trump campaign’s Russia ties two years ago.

Cohen won’t testify publicly until Wednesday, when he goes in front of the House Oversight and Reform Committee. Members on that panel are expected to ask questions about the campaign finance violations, Trump’s business practices and compliance with tax laws and “the accuracy of the president’s public statements,” according to a committee memo.

The hearing’s scope does not include Russia. House Oversight and Reform Chairman Elijah Cummings, D-Md., said he set out parameters for the questioning in an effort not to conflict with special counsel Robert Mueller’s Russia investigation, with which Cohen has cooperated.

On Thursday, Cohen is set to go back behind closed doors to talk to the House’s Intelligence Committee. Like his Senate interview, there will be no off-limits questions.

Cohen’s week of interviews comes as House Democrats launch multiple investigations into Trump’s ties to Russia and conflict-of-interest issues within the administration. House Republicans in the last Congress investigated whether Trump’s campaign coordinated with Russia, but ended that probe over Democratic objections, saying that there was no evidence that they did so. The Senate’s Russia investigation is ongoing.

Cohen had been scheduled to speak to the three committees earlier this month, but rescheduled all of those appearances for different reasons. He said he needed to recover from surgery and also was concerned about what he considered to be threats to his family from Trump and the president’s lawyer, Rudy Giuliani.

House Intelligence Committee Chairman Adam Schiff postponed Cohen’s appearance before that committee saying it was “in the interests of the investigation,” with no additional details.