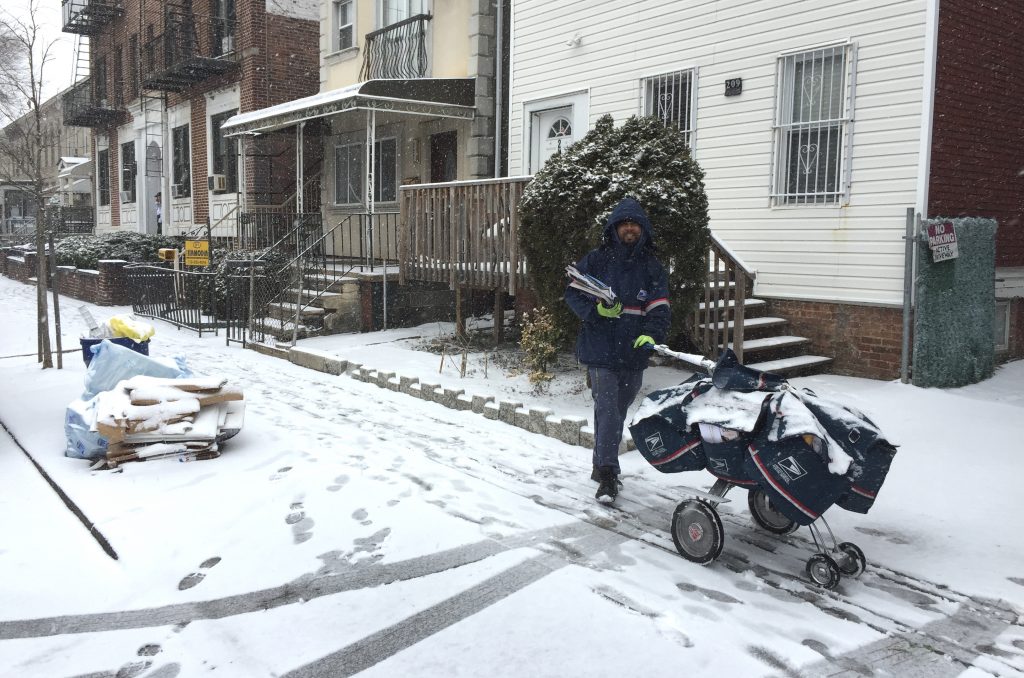 A sprawling storm closed schools, snarled travel and threatened homeless populations Wednesday with snow and cold stretching from the Midwest to the East Coast and with heavy rain in the South.

Snow fell in New York City, and schools in several parts of the U.S. closed amid predictions for messy afternoon commutes. Philadelphia closed city offices as of 1 p.m. and put a “code blue” into effect, putting extra teams out to encourage homeless people to get into shelters. New Jersey’s governor declared a state of emergency with up to 4 inches of snow expected before turning to rain Wednesday night.

Nationwide, more than 2,000 flights were canceled and more than 3,400 were delayed, according to the flight-tracking website FlightAware. The mid-Atlantic region was especially hard hit as airlines pulled flights ahead of the storm. Washington’s Reagan National Airport led the pack Wednesday morning, with 37 percent of departures and 33 percent of arrivals canceled.

Tourists who made it into the Washington area before the storm hit were unbothered.

“I love it. It’s absolutely beautiful,” said Rylee Maxwell, visiting from Toronto. “All the pictures kind of show in the summertime, so I think it’s really nice to see all the white powdery snow everywhere.”

Farther west, snow forced Minneapolis and St. Paul schools and scores of other districts in Minnesota and Wisconsin to cancel classes.

Schools, businesses and government offices in Kansas closed or announced plans to start late. Several school districts closed in Missouri, where officials said many roads across the northern half of the state were partially or completely snow covered.

Heavy rains caused problems in parts of the Deep South. Flood watches and warnings cover the northern parts of Alabama, Mississippi and Georgia, and nearly all of Tennessee is at risk for floods.

The streak of bad weather is expected to continue through Wednesday night and in the days to come in some areas, forecasters said.

A “potent and cold” low pressure system was expected to drop up to 3 inches of snow on the outskirts of Las Vegas starting Wednesday night and continuing into Friday morning, the National Weather Service said.

Heavy snow was predicted for northern Arizona and significant rain for central Arizona deserts through Friday.