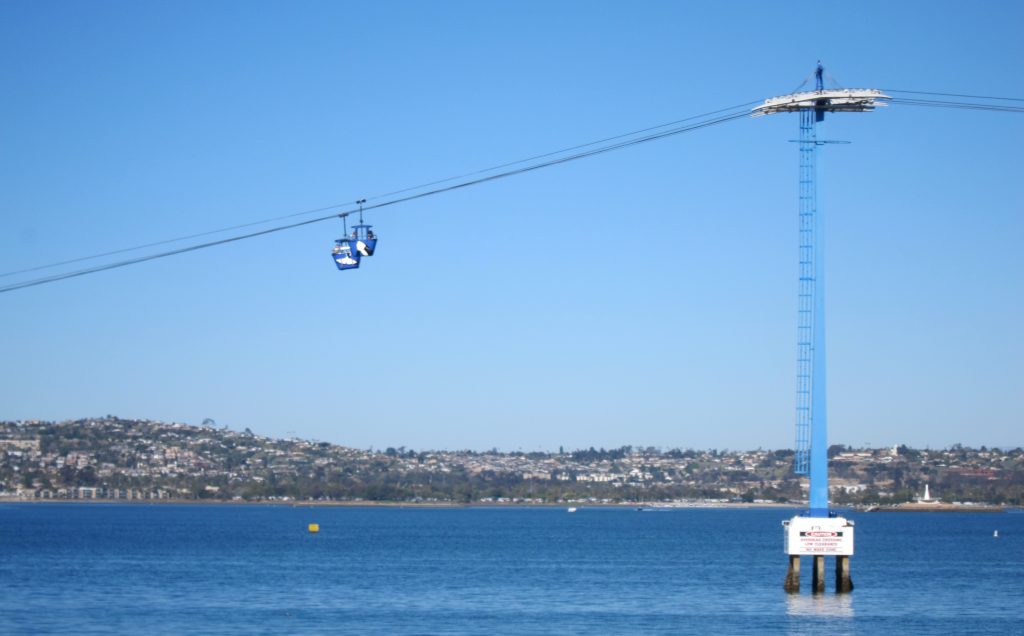 Sixteen passengers, including a baby, were rescued after spending four hours trapped inside a stalled SeaWorld gondola ride Monday night.

The San Diego Fire-Rescue Department responded to a startling scene at Mission Bay around 7:20 p.m. A gust of wind halted the Bayside Skyride, leaving several gondolas suspended midair, above the water, and requiring harnesses and life boats to safely remove the passengers.

The fire department announced that firefighters from its Technical Rescue Team removed 16 people from five gondolas. Of the 16, seven were children, including a baby, according to KSWB in San Diego. The San Diego Police Department did not return a request for comment, but KSWB reported that the gust of wind tripped the circuit breaker.

Jonathan Sherr was riding one of the gondolas with his 15-year-old son when it stalled.

“I looked up at the cable, and right when I was looking up at the cable shaking violently, we just stopped,” he told KNSD in San Diego, adding that there was little communication between SeaWorld and the trapped passengers during the first hour of the ordeal.

Twelve-year-old Kimberly Sanchez, 12, told the TV station that she also took note of the severe wind conditions when boarding the ride.

“I don’t know even why SeaWorld had the thing open,” she said. “They should’ve just told us to walk out because it was windy, we could’ve fallen off, something could’ve happened. And something did!”

The rescue mission lasted more than four hours, according to the San Diego Fire-Rescue Department. The department’s official Twitter account reported that by 11:30 p.m., “all 16 people trapped in the gondola ride are safe on the ground.”

“Guest safety is paramount,” SeaWorld said in a statement Monday. “Once our guests are cared for, we will conduct a thorough inspection of the ride before reopening. We apologize for the inconvenience this has caused the guests.”

The statement also mentioned that there were blankets aboard each gondola. At the time of the rescue mission, the National Weather Service said it was approximately 50 degrees in San Diego.

SeaWorld will begin an inspection of the ride Tuesday, David Koontz, the park’s communications director told The Washington Post in an email. It does not yet know when the Bayside Skyride will reopen.”We are happy that all 16 SeaWorld guests were safely removed from the ride and we applaud San Diego Fire & Rescue and San Diego Lifeguards for the professionalism during the evacuation operation,” he said.