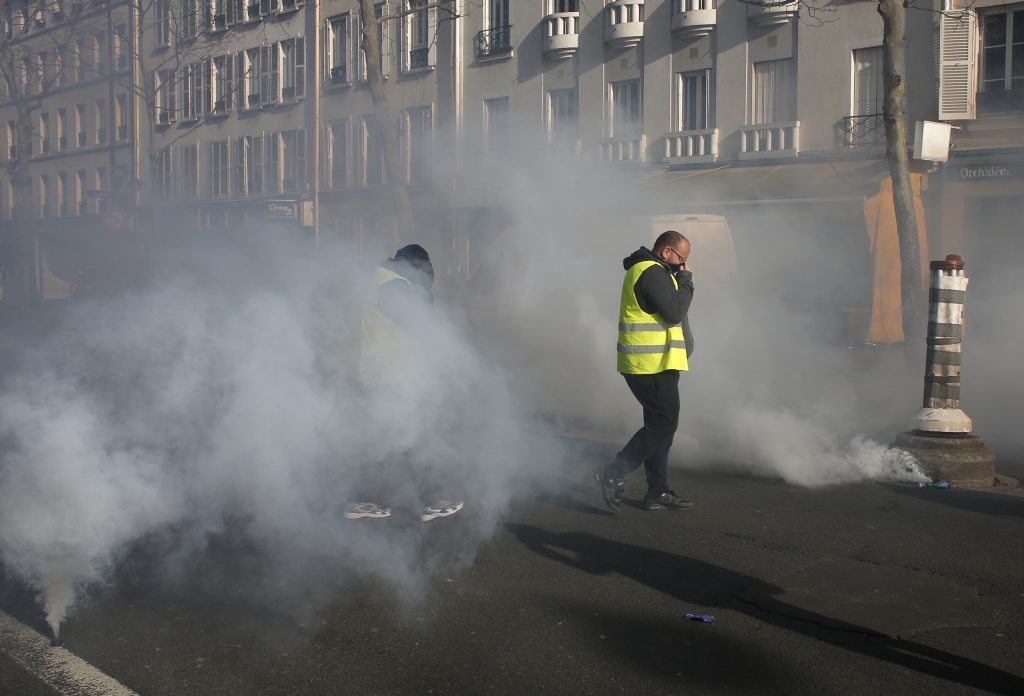 The Jewish-French philosopher Alain Finkielkraut never dreamed that he would find himself so attacked and affronted — in Paris, the capital of his own homeland. Among the leading academicians in the French Republic, Finkielkraut was the victim of violent protestors this week who called him a “dirty Jew” and told him to “go back to Tel Aviv!”

Finkielkraut well understands anti-Semitism, a topic on which he has spoken and written widely. He frequently visits Israel, and lectures all over the world on the issues of racism and xenophobia. But the esteemed philosopher did not expect to become a concrete example of the matter himself. The Yellow Vest protestors, most of them of Arab origin, ambushed him on Boulevard du Montparnasse, and made it quite clear to him: “France is ours, not yours.”

As his name indicates, Finkielkraut is also the son of immigrants. His parents arrived in France from Poland, where their parents had perished in Auschwitz. Of late, Judaism has become a central topic in his writings, and especially since the Second Intifada in Israel and the rise of anti-Semitism in France. He is one of the leaders in the fight against anti-Semitism, as well as one of Israel’s most prominent supporters in the face of its many critics in France.

One of the truisms that guide his path is this: “A nation that forgets its past is doomed to relive it.” Without fear or deference, Finkielkraut stands openly and courageously against the coalition of evil, and bravely condemns its hatred and antipathy towards Israel. Unwilling to accept the claim that the haters are victims, he has said, “They are not miserable; they are Muslims.”

Paris has an ancient tradition of violent street uprisings, and they have often led to rivers of blood. In 1572, in the St. Bartholomew’s Day massacre during the French Wars of Religion, tens of thousands of Christians in Paris were murdered by their neighbors, members of a different sect of the same religion. Even more people were killed during the French Revolution some 230 years ago. And in 1962, police slaughtered 200 peaceful protestors in the streets of Paris as they called for independence for Algeria.

This time, the Yellow Vest protests began as an economic issue. The rising cost of living, taxes, and benefits for the wealthy classes in France raised the ire of the masses against President Macron. He himself has not seemed particularly irked by the protest wave, for despite his waning popularity and the growth of the protest movement, he cannot easily be ousted. It is true that during the riots of May 1968, then-President de Gaulle was forced to find temporary refuge in a French army base in Germany — but this does not appear to be the danger at present. And so, since the masses can’t win against the president, they seek out another victim: the wandering, exiled Jew.

It’s no secret that anti-Semitism in Europe is on the rise. Anti-Semites can be found everywhere: in Belgium, Holland, England, and Switzerland, and each time in another guise. In one country they are the enlightened ones, in another they’re the liberals, in a third country they are the conservatives, and elsewhere they are considered the defenders of freedom. Their common denominator, however, is always the same: It’s the Jews’ fault. The motives might be different, the reasons are varied, the arenas periodically change — but the Jew is always to be blamed.

The French authorities announced last week that the number of anti-Semitic incidents had climbed sharply in 2018. In 2017, there were 311 such incidents, and in 2018 – no fewer than 541, a 75 percent jump. “These acts are revolting,” said Prime Minister Edouard Philippe. “Day after day I notice scandalous degradation and inscriptions. Day after day I notice that symbols and venues our country cherishes are attacked.”

Finkielkraut himself does not appear to be afraid, and unflinchingly continues his public campaign. He was interviewed several times this past week about the dangers of these seemingly “popular” protests. “France has turned into a country that hates Frenchmen more than it hates foreigners,” he said.

This is of course a strong and painful statement. The European nations are finding themselves gradually drawn into the State of Islam. They are losing their Europeanism as Muslim culture increasingly takes its place. Their borders are open and hacked through, and it seems to be only a matter of time before the Muslims will seek to rule over them as well.

The City of Lights is steeped in darkness.