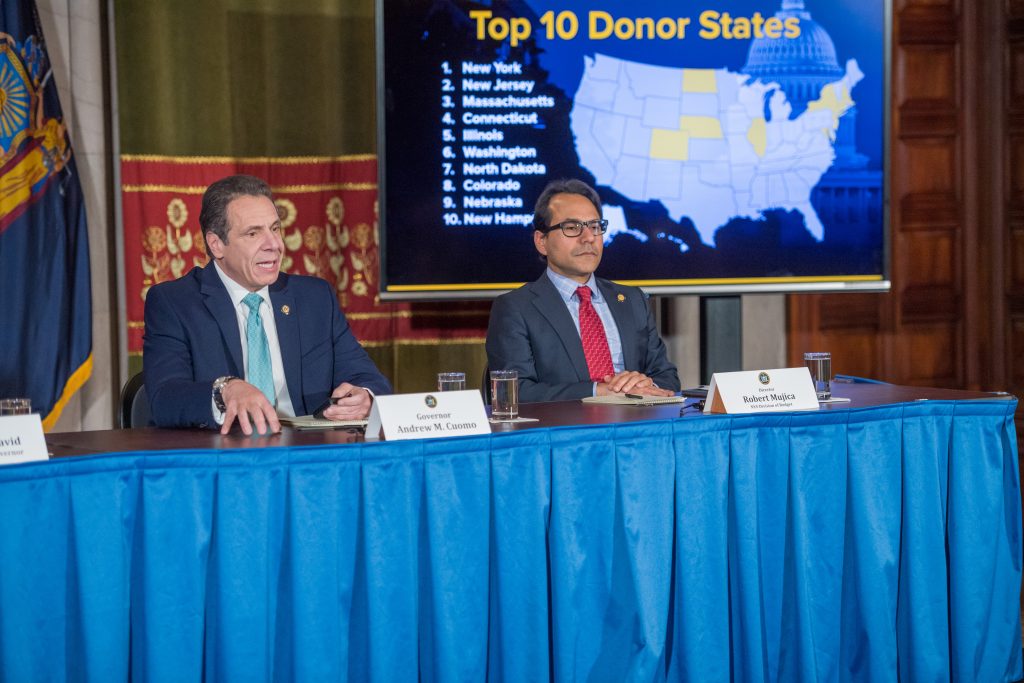 President Donald Trump again indicated last week that he might be open to revisiting the new limit on state and local tax deductions that hits many middle-income residents hard in California and other high-tax, Democratic states.

Even so, don’t count on any changes soon to the Republican tax law that went into effect last year.

Legislative and political realities mean the $10,000 cap is unlikely to be scrapped or increased until after the 2020 elections at the earliest.

Although opposition to the cap is widely believed to have helped defeat Republican House members in California, New York and New Jersey last November, a key Senate Republican is adamantly opposed to a change. And increasing or eliminating the cap probably wouldn’t help get those seats back.

New York Gov. Andrew Cuomo, a Democrat and leader of the fight against the cap, this month called the new tax policy “an economic civil war that helps red states at the expense of blue states.”

Gov. Cuomo met with President Trump at the White House Tuesday to discuss the matter.

“I told the president myself today: SALT repeal is hurting us. And if you hurt New York, you’re harming the economic engine of the nation,” Cuomo tweeted afterward.

He said that Trump indicated he was open to making changes, similar to something the president had said recently during a meeting with newspaper reporters.

“The president reiterated the negative impact that high taxes in states like New York have on hardworking families and job creators,” Deere said.

Trump’s top economic adviser, Larry Kudlow, said Thursday that he would meet with Cuomo and his staff soon to discuss possible solutions.

Lawmakers and officials from states most affected by the cap are pushing to scrap it after arguing strongly during the debate over the Republican tax bill in 2017 that their residents were being unfairly targeted because they tend to vote for Democrats.

Of the top 10 states for deductions for state and local taxes, known as SALT, Trump carried only three in the 2016 election.

“Capping the SALT deduction was a direct hit on my constituents and my state,” said Rep. Mike Thompson, D-Calif., a senior member of the tax-writing House Ways and Means Committee. “We must have relief in this area, whether it’s changing the cap in some way or something else.”

But the path to changes is filled with severe obstacles.

The 2017 tax law cut the corporate tax rate and reduced personal rates across the board.

Republicans argue that the state and local tax deduction is mostly used by the wealthy and is unfair to residents of lower-tax states. Capping the deduction helped simplify the tax code and make it more equitable, they said.

What’s more, the rules adopted by the new House Democratic majority mean they would have to raise hundreds of billions of dollars elsewhere to make up for the tax revenue lost by reinstating the deduction. That would increase Republican opposition.

Sen. Charles E. Grassley, R-Iowa, who chairs the committee that would consider a revision, said that he’s not open to raising or eliminating the cap.

“Everybody but the president that’s bringing this up are the very same people that complained that this tax bill … was something for the very wealthy and they want to turn around and give the 1 percent of the people that are affected by the state and local tax deduction (the ability to) pay less taxes,” said Grassley, chairman of the Senate Finance Committee. “It’s intellectually dishonest.”

An analysis by the left-leaning Institute on Taxation and Economic Policy found that nearly two-thirds of the benefit of repealing the cap would go to the top 1 percent of taxpayers.

But even though the wealthy reap the most benefits, many of the people affected by the new cap in high-cost, high-tax states are middle-income earners.

About 6.1 million California residents filed for the deduction in 2015, reducing their federal taxable income by $18,438 on average, according to the Urban-Brookings Tax Policy Center. Only New York and Connecticut had a higher average deduction.

There have been stories about angry taxpayers, many of whom find that they may owe money to the IRS or that their refunds are smaller than expected because of the various changes, including the elimination of personal exemptions and other deductions, and new withholding tables put in place last year.

The limit on state and local tax deductions was highly unpopular in California, New York and New Jersey. In last fall’s elections, Democrats took control of the House in part because they won a combined 14 seats in those states that had been held by Republicans.

“I think frankly that the losses on the Republican side would have been much stronger without the tax reform,” he said, arguing the tax cuts created a stronger economy that helped keep voter dissatisfaction down.

House Democrats have proposed legislation to fully restore the deduction. But on top of strong opposition from Senate Republicans and President Trump, there’s another problem with the bill.

Unlike Republicans, who passed the tax cut legislation even though it was projected to increase the federal budget deficit by $1.5 trillion over a decade, Democrats have a rule that any lost revenue must be offset.

To offset the cost of the bill, all the changes to the individual tax code, including the deduction limit on state and local taxes, expire after 2025. That sets up a future fight over extending the changes, similar to the battle in 2012 over extending the temporary tax cuts put in place by President George W. Bush.

For now, though, the focus is on the state and local tax deduction. And the so-called pay-as-you-go rule means that Democrats must find new revenue to offset the estimated $88 billion annual cost of restoring the deduction.

Sponsors of the legislation want to do that by raising the top individual tax bracket back up to 39.6 percent, where it stood for years before the Republican tax bill lowered it to 37 percent. Such a change would increase Republican opposition to addressing the state and local deduction limit.

Raising taxes on the wealthiest Americans has become a new rallying cry of some liberals. They include Sen. Elizabeth Warren, D-Mass., the presidential candidate who wants to enact a wealth tax on people with more than $50 million in assets, and freshman Rep. Alexandria Ocasio-Cortez, D-N.Y., who has floated the idea of a top rate of as much as 70 percent for income above $10 million.