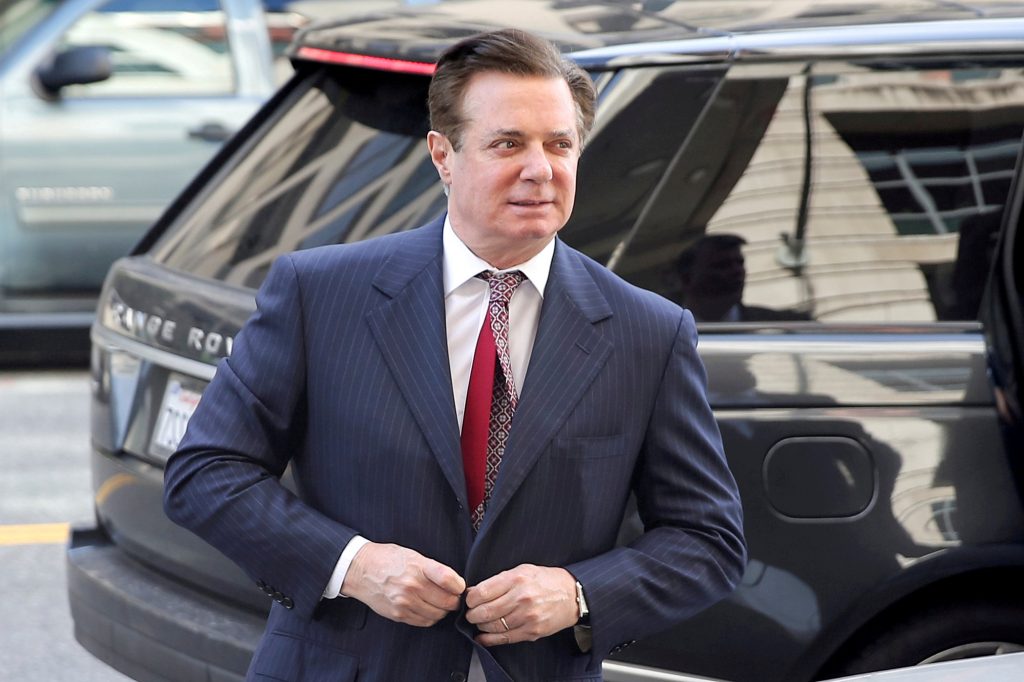 In their sentencing memo filed in U.S. District Court for the Eastern District of Virginia, prosecutors said Manafort, who is 69, deserves between 19.6 and 24.4 years in prison and a fine of between $50,000 and $24 million.

“While some of these offenses are commonly prosecuted, there was nothing ordinary about the millions of dollars involved in the defendant’s crimes, the duration of his criminal conduct or the sophistication of his schemes,” prosecutors said in the memo.

“Manafort did not commit these crimes out of necessity or hardship,” they said. “He was well-educated, professionally successful and financially well off. He nonetheless cheated the United States Treasury and the public out of more than $6 million in taxes at a time when he had substantial resources.”

Friday’s court filing in Virginia came just days after a federal judge in Washington, D.C., ruled that Manafort had breached his plea agreement in a parallel case by lying to investigators despite a pledge to cooperate.

That finding earlier this week by Judge Amy Berman Jackson in U.S. District Court for the District of Columbia could have a direct impact on how Manafort is sentenced in the Virginia case.

Judge T.S. Ellis in Alexandria, Virginia, had planned to sentence Manafort on Feb. 8, but he later postponed that until after Jackson’s ruling, saying it “may have some effect on the sentencing decision in this case.”

Manafort was one of the first people in Mr. Trump’s orbit to face criminal charges as part of Mueller’s investigation into whether Mr. Trump’s campaign colluded with Russia to tilt the 2016 presidential election in his favor.

Mr. Trump has denied colluding and called the probe a witch hunt, while Russia has denied meddling in the election.

None of the charges Manafort faced related directly to Russian interference in the 2016 campaign.

In the Virginia case, prosecutors accused Manafort of hiding from U.S. tax authorities $16 million he earned as a political consultant for pro-Russian politicians in Ukraine, money he used to fund an opulent lifestyle.

Later, when his lobbying work started to dry up following the ouster of Ukrainian President Viktor Yanukovych, prosecutors said Manafort began lying to banks to secure $20 million in loans to keep his lifestyle afloat.

After almost four days of deliberations, a 12-member jury found Manafort guilty on two counts of bank fraud, five counts of tax fraud and one charge of failing to disclose foreign bank accounts.

In September, Manafort pleaded guilty in a parallel case in Washington to attempted witness tampering and conspiring against the United States, a charge that covers conduct including money laundering and unregistered lobbying.

As part of that deal, he pledged to cooperate with the Justice Department. However, prosecutors later said they had caught Manafort in several lies and wanted to tear up the agreement in a move that could cause him to face a much stiffer prison sentence.

Earlier this week, Jackson ruled there was a “preponderance” of evidence that Manafort lied on three different topics, including his communications with his former business partner Konstantin Kilimnik, whom prosecutors say has ties to Russian intelligence and helped Manafort try to obstruct justice. Kilimnik has denied such ties.

Specifically, Jackson found that Manafort lied about his interactions with Kilimnik including about the sharing of polling data on the Trump campaign and their discussions over a “Ukrainian peace plan,” a proposal that envisioned ending U.S. sanctions on Russia, long an important objective of Russian President Vladimir Putin’s government.

Prosecutors have said these lies are “at the heart” of their investigation into potential collusion, according to a transcript released last week.