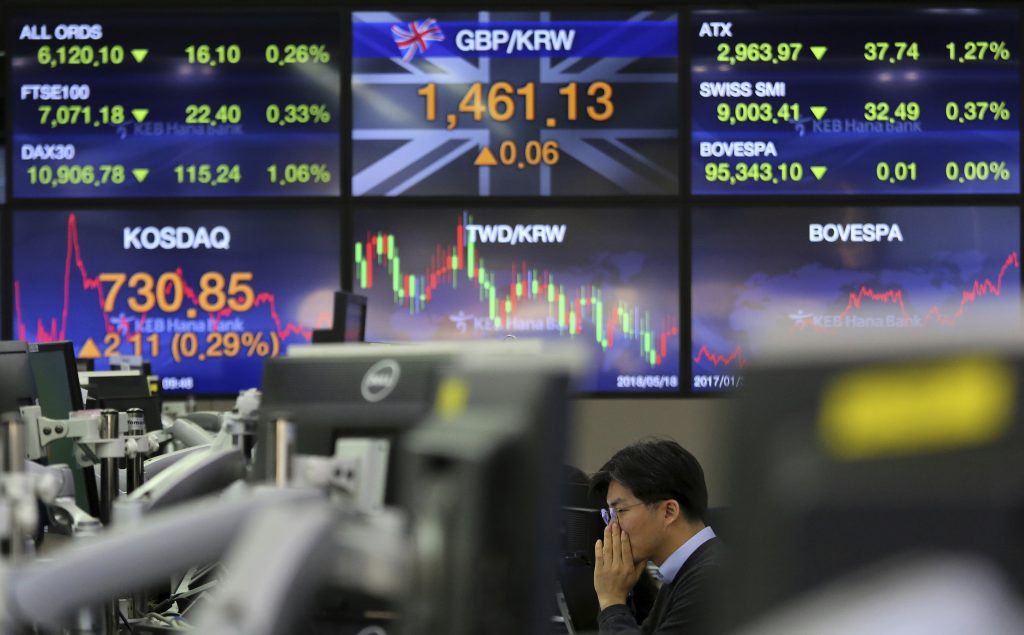 Asian shares barely moved on Monday as investors were unable to shake worries about global growth, U.S. politics and the Sino-U.S. trade war, keeping the safe haven dollar near a six-week top against major currencies.

Chinese stock indexes played catch-up when reopening after a week-long break. Gains came as the Commerce Ministry said retail earnings during the Lunar New Year holiday jumped 8.5 percent from the period last year, even though growth in the world’s second largest economy is slowing.

Australian stocks recouped some losses to end 0.2-percent lower while South Korea’s KOSPI index was up 0.2 percent. Indonesian and Indian benchmarks were in the red.

That left MSCI’s broadest index of Asia-Pacific shares outside Japan slightly firmer after it was toppled from a four-month top on Friday.

Trading volumes were generally light, with Japan on public holiday.

“Ranges have been on the tight side today, and nobody has been prepared to stamp down any authority,” said Chris Weston, head of research at Melbourne broker Pepperstone.

“I have no doubt that will change as we head through the week, with trade relations slap bang at the epicenter of concerns,” he said.

Tensions between the United States and China have cost both countries billions of dollars and roiled global financial markets.

A new round of trade talks began in Beijing on Monday, with higher-level talks involving U.S. Trade Representative Robert Lighthizer and Treasury Secretary Steven Mnuchin on Thursday and Friday.

If the negotiations do not progress sufficiently by March 1, the U.S. has said it intends to raise tariffs on $200 billion of imports from China to 25 percent from 10 percent.

“U.S.-led trade uncertainty along with increasing concerns over the extent of the current global growth slowdown has seen an increase in demand for core global bonds,” said Rodrigo Catril, senior forex strategist at National Australia Bank.

“Against a backdrop of uncertainty and despite a Fed that is comfortably on hold, the dollar continues to win the least ugly contest.”

The U.S. Federal Reserve has signaled patience on policy after delivering four hikes in 2018, citing growing economic risks from a slowdown in global growth.

The dollar index held near a six-week high around 96.695 against a basket of currencies, setting up for its sixth straight session of gains as traders piled into the greenback in a safe-haven move.

World markets are already under strain from a drum-roll of gloomy news on the global economy.

Last week, the European Commission sharply downgraded euro zone growth for this year and next, and U.S. President Donald Trump added to the anxiety with a declaration that he had no plans to meet with Chinese President Xi Jinping before the March 1 deadline to achieve a trade deal.

Adding to worries, a collapse in talks between Democrat and Republican lawmakers over the weekend amid a clash over immigrant detention policy raised fears of another government shutdown.

The rising pressure on growth means the near-term fortunes of the equity markets will partly depend on earnings from major U.S. companies. These include Coca-Cola Co., PepsiCo Inc., Walmart Inc., Home Depot Inc., Macy’s Inc. and Gap Inc. for further clues about the health of the consumer sector.

Analysts now expect first-quarter earnings for S&P 500 companies to decline 0.1 percent from a year earlier, which would be the first such quarterly profit decline since 2016, according to IBES data from Refinitiv.

Elsewhere, the euro was barely changed at $1.1322 after five straight days of losses took it to more than 2 weeks lows. Sterling dithered at $1.2931.

The Australian dollar inched up from Friday’s one-month lows although sentiment was still cautious after the country’s central bank opened the door to a possible rate cut.

Oil prices slipped on concerns about slowing global demand amid a pick-up in U.S. drilling activity.