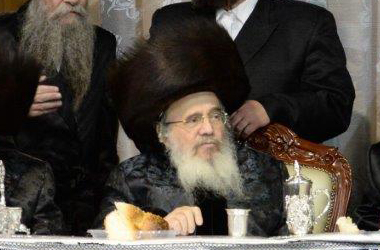 The Chassidic world was plunged into mourning on learning of the petirah of the Zutchka Rebbe, Harav Nosson Dovid Rosenbaum, zy”a, on Motzoei Shabbos at the age of 73, after an illness.

Harav Nosson Dovid was born in Nisan 5705/1945, to his father Harav Yitzchak Eizik Rosenbaum, the Nachal Yitzchak of Zutchka, zy”a, and his mother Rebbetzin Chanah, a”h, the daughter of Harav Nosson Dovid Hollander, zt”l, Rav of Amsana in Galicia, after whom he was named.

When he came of age, Reb Nosson Dovid married, lhbch”l, Rebbetzin Sarah, the daughter of Harav Mordechai Goldman, the Zhviller Rebbe, zy”a – whose yahrtzeit is marked Motzoei Shabbos, 28 Shevat, the same day as the passing of his son-in-law.

In 5731/1971, after several years in Kiryat Sanz, Netanyah, he moved to the United States, at the request of his father-in-law, who had founded the community in Union City, New Jersey. There he was appointed Rav and Rosh Yeshivah. The Klausenberger Rebbe settled in Union City the following year.

As an avreich, the Rebbe served as menahel ruchani of a number of Talmudei Torah, in America and later in Eretz Yisrael.

After the petirah of his father, in 5760/2000, he was appointed Rebbe, leading the community in the Zutchka beis medrash in Bnei Brak.

The Rebbe was a tremendous masmid, and well versed in all aspects of the Torah. Many attended his tischen in Bnei Brak, on Shabbosos and Yamim Tovim.

In recent months, since before Lag BaOmer, the Rebbe was hospitalized, after he was rushed to the hospital after suffering from shortness of breath. Since then he was in the ICU and his condition took a turn for the worse in the last week. With a minyan of family around his bed, the Rebbe returned his soul to its maker on Motzoei Shabbos in the Maayaeni Hayeshuah hospital.

The levayah set out from the Zutchka beis medrash in Bnei Brak, continuing to Yerushalayim, where the Rebbe was buried on Har Hazeisim late Motzoei Shabbos.