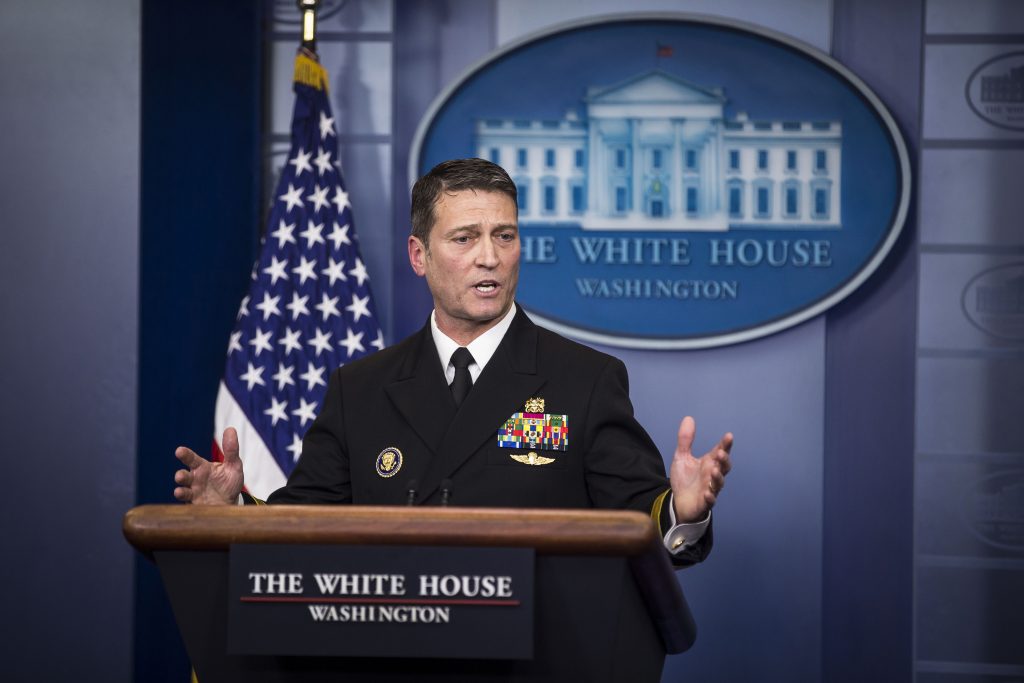 President Donald Trump has tapped a senior Navy officer that he considered last year to be his Veterans Affairs secretary for promotion to two-star admiral and to be his chief medical adviser, even though there is still an open Pentagon investigation against him into allegations that derailed his VA secretary nomination.

The White House sent Rear Adm. Ronny Jackson’s name for promotion consideration to the Senate on Jan. 15. He was serving as the president’s doctor last April when Trump nominated him for the VA post, and withdrew from consideration after accusations of mismanagement and misconduct as White House physician emerged.

A spokesman for the Defense Department Inspector General’s Office, Bruce Anderson, said his office’s investigation into Jackson is still ongoing. The office, considered the Pentagon’s top watchdog, said in June that it had opened a case against Jackson, though it would not comment on the scope of it.

A Navy spokesman, Lt. Christina Sears, said Jackson is still assigned to the White House. The Navy originally submitted Jackson’s name for promotion last year before Trump nominated him to be VA secretary, and the White House resubmitted it, she said. Task & Purpose first reported the re-submission of Jackson’s nomination on Friday evening.

A White House official, speaking on condition of anonymity due to the sensitivity of the issue, said that Jackson is no longer the president’s chief physician and the promotion nomination was simply re-upping one from last year. Trump still likes Jackson and believes he was treated unfairly, the official said.

The White House released a list of new appointments on Saturday that shows Jackson serving as an assistant to the president and as his chief medical adviser.

It isn’t clear whether the Armed Services Committee will act on Jackson’s new promotion nomination while the investigation is still ongoing.

“We don’t comment on pending nominations, ongoing investigations, or in this case both,” said Chip Unruh, a spokesman for Sen. Jack Reed, D-R.I., the ranking Democrat on the committee.

The nomination thrusts a controversy that had started to fade from view for the Trump administration back into the spotlight.

After Trump nominated Jackson for the VA secretary post last April, Sen. Jon Tester, D-Mont., the ranking member of the Veterans’ Affairs Committee, released a two-page summary of accusations against him that included freely dispensing medication, drinking on the job and creating a hostile workplace. Some former colleagues said he was nicknamed the “Candyman” because of how he dispensed medications.

The White House disputed the most serious of those allegations, saying it had conducted a thorough investigation of his past and found no evidence. Brian McKeon, a former executive secretary and chief of staff of the National Security Council in the Obama administration, also said in an interview in April that the allegations did not ring true.

Jackson, who previously served as President Barack Obama’s attending physician, denied any wrongdoing, and Trump leaped to his defense.

“Ronny L. Jackson is one of the finest men I’ve ever met,” Trump said last April, adding that “Washington can be a very mean place.”

“These were false accusations about a great man,” Trump said.

Trump campaigned against Tester in his Senate re-election bid in Montana, saying in one rally that Tester had “led the Democrat mob in the effort to destroy the reputation of a great man, Admiral Ronny L. Jackson.”

Trump added that Jackson did not really want the job, but Trump asked him to do it anyway.

“He might not have been qualified,” Trump said. “But here’s a doctor at a high level, and he’s a man that everybody respected. I saw that. Respect is so important.”

Tester was re-elected to the Senate in November.