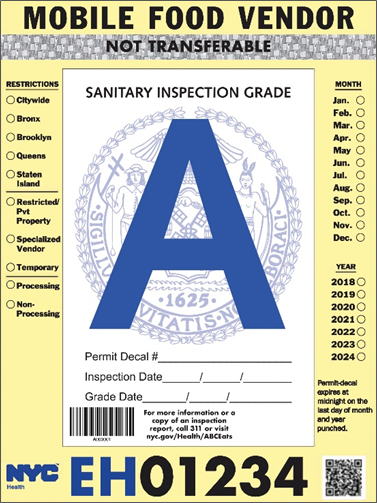 The city’s Department of Health and Mental Hygiene handed out the first batch of grades Friday to about two dozen of the city’s more than 5,000 food carts and trucks.

On the Lower East Side, Health Commissioner Dr. Oxiris Barbot congratulated Mahmoud Abdel Wahed, the owner of Mo’s Coffee Cart, which was among the first food carts in the city to receive an “A” grade.

They’re the same style placards that have been commonplace at restaurants, coffee shops and other establishments around the Big Apple for about a decade.

“New Yorkers told us that they love our restaurant grading program, and it only made sense, thanks to Council Member Koslowitz, to extend it to food carts and trucks,” said Health Commissioner Dr. Oxiris Barbot. “Now customers will be able to see, before deciding to eat at a food cart, how it performed at its health inspection.”

The city has always inspected food carts and flagged violations. The new report cards are the result of a law passed last June.

The city says it expects to have all carts and trucks graded within two years.