National ‘Oh My G-d! Run!’: The Day a Deadly Wave of Molasses Tore Through Boston
National 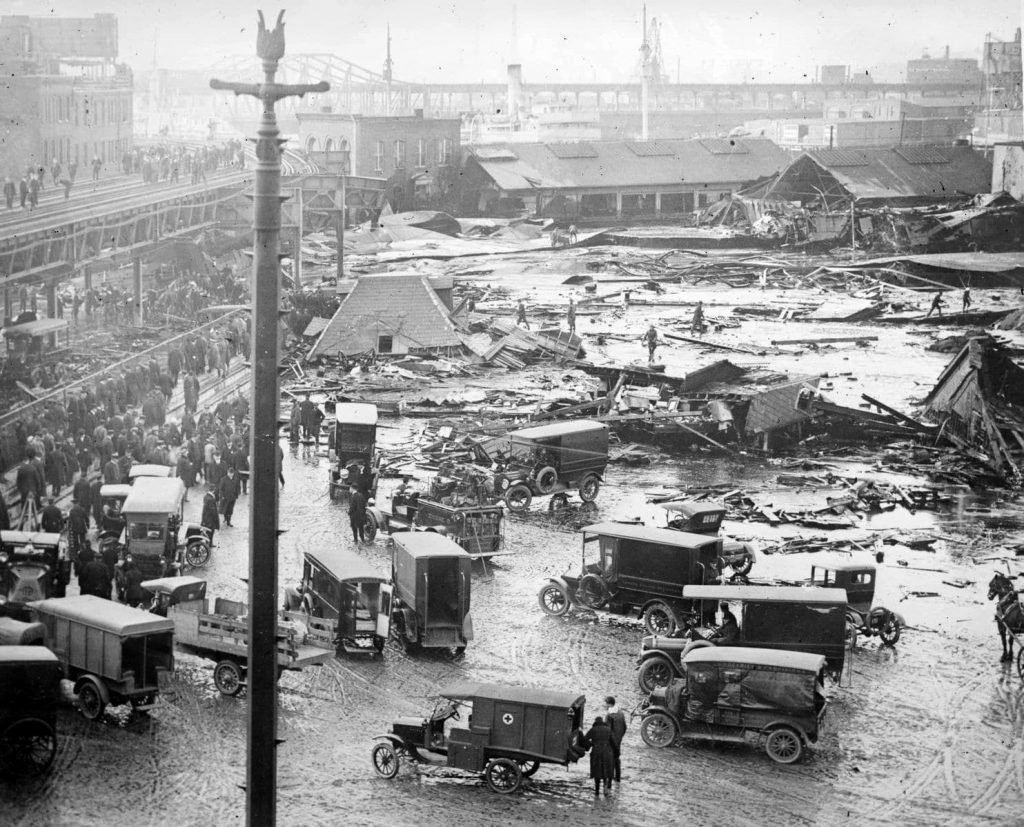 It was promising to be an uncharacteristically warm winter day in Boston. The temperature on Jan. 15, 1919, had soared to 40 degrees from 2 degrees earlier in the week, prompting many downtown workers to head outdoors.

Shortly after noon in the city’s bustling North End, as Model T Fords chugged by and elevated trains screeched above Commercial Street, a group of firefighters sat down for a game of cards in a firehouse near a massive tank that stored molasses used in the production of industrial alcohol.

As the firefighters played their games, they heard a strange staccato sound. The rivets on the 50-foot-high storage tank began to shoot off and a dull roar followed. At the noise, firefighter Paddy Driscoll whipped around. “Oh my G-d!” he exclaimed as he saw the dark torrent spilling out. “Run!”

The Great Molasses Flood was underway. The syrup swamped one of Boston’s busiest neighborhoods, killing 21 and injuring 150.

“Midday turned to darkness as the 2.3 million gallons of molasses engulfed the Boston waterfront like a black tidal wave, 25 feet high and 160 feet wide at the outset,” Stephen Puleo recounted in his book “Dark Tide: The Great Boston Molasses Flood of 1919,” which vividly captures details of the disaster, including the chilling reactions of Driscoll and others to the tank rupture.

Boston Police patrolman Frank McManus spotted the 26 million-pound wall of goop and shouted to the dispatcher, “Send all available rescue vehicles and personnel immediately – there’s a wave of molasses coming down Commercial Street!”

By now traveling at 35 mph, the wave of sugary doom tore through the North End with enough power to crumple small structures, blast a truck through a fence, knock the firehouse off its foundation and rip away a beam supporting the elevated train tracks.

Within seconds, two city blocks were inundated and the death toll began to climb.

City workers who were taking advantage of the warmth to eat lunch outside drowned where they sat. Two 10-year-olds who were collecting firewood near the molasses tank were swept away. Others suffocated as their homes and basements quickly filled.

“I was in bed on the third floor of my house when I heard a deep rumble. … I awoke in several feet of molasses,” Martin Cloughtery told the Boston Globe in 1919. “A pile of wreckage was holding me down, and a little way from me I saw my sister. I struggled out from under the wreckage and pulled my sister toward me and helped her on to a raft. I then began to look for my mother.”

“A score of Public Works Department horses were either smothered in their stalls by the flood of molasses or so severely injured as their stable collapsed that they were shot by policemen to end their suffering,” the Globe wrote in 1919.

“Here and there struggled a form, whether it was animal or human being was impossible to tell,” The Boston Post wrote. “Only an upheaval, a thrashing about in the sticky mass, showed where any life was.”

Scientific American magazine in 2013 explained why a wave of molasses can be much deadlier than a wave of water. “The dense wall of syrup surging from its collapsed tank initially moved fast enough to sweep people up and demolish buildings, only to settle into a more gelatinous state that kept people trapped.”

Rescuers and sailors from the USS Nantucket descended on the scene in droves, but struggled in the muck, which stained the waters of Boston Harbor brown for several days.

The search for survivors became a search for answers: Why did the tank rupture and were there signs beforehand?

The second part of that question was easily answered. During the summer of 1918, one of the hottest on record in Boston, North End residents began noticing leaks at the tank. After an employee reported a leak, the company acted, by painting over the gray shell of the tank with a rust-brown color. “The sticky liquid now blended, chameleon-like, with the fresh coat of paint, indiscernible from the tank’s wall,” Puleo wrote.

Litigation swiftly followed the explosion, and the lawsuit and trial against the tank’s owner, U.S. Industrial Alcohol, would last six years and grow to one of the most exhaustive in the state’s history.

The trial produced three theories about the cause of the rupture: structural failure of the tank, fermentation of the molasses that led to an eruption and sabotage via a bomb. The company steadfastly blamed anarchists. A court-appointed auditor disagreed, and in 1925 ruled that the company was to blame for the disaster. U.S. Industrial Alcohol would later pay the flood victims and their families $628,000, the equivalent of $9.2 million today.

Today, studies have offered grim insight into why the tank collapsed. In a 2015 issue of Civil and Structural Engineer Magazine, engineer Ronald Mayville concluded that the walls of the tank were too thin, a flaw that builders at the time should have known. “No one disputed they under-designed the tank walls,” he told The Boston Globe.

Back in the Boston of 1919, the city grieved as more bodies were found, some so battered and glazed by molasses that identification proved difficult. Four months later, the last body attributed to the flood was discovered under the wharf.

“Boston is appalled at the terrible accident,” Mayor Andrew J. Peters said in 1919. Over time, however, the Great Molasses Flood has become less of a catalyst for outrage and more of a quirky footnote in history.

“The ﬂood today remains part of the city’s folklore, but not its heritage,” Puleo wrote. “The substance itself,” molasses, “gives the entire event an unusual, whimsical quality.”

But for years after the flood, the memories of it resided not just in North Enders’ minds, but in their noses. “The smell of molasses,” journalist Edwards Park wrote in 1983, “remained for decades a distinctive, unmistakable atmosphere of Boston.”