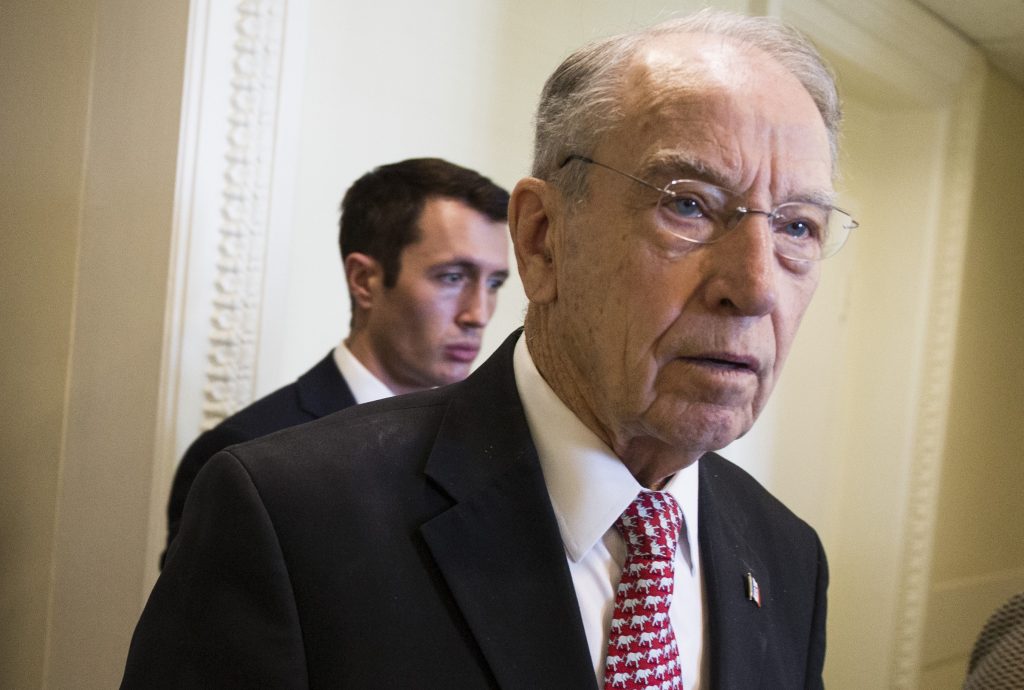 President Donald Trump would gain line-by-line power to raise tariffs on individual products if trading partners charge higher import taxes under legislation being mulled by the White House, a move that threatens to unwind decades of global agreements.

The draft “United States Reciprocal Trade Act”, which some within the White House would like President Trump to unveil in his State of the Union address this month, faces an uphill battle in Congress: Republicans and Democrats have been exploring how to restrain the president’s tariff powers rather than extend them.

Since Bloomberg first reported the White House plans earlier this week, Senate Finance Committee Chairman Chuck Grassley of Iowa and other prominent lawmakers have ruled out the possibility that the president would be granted more unilateral power to impose tariffs on U.S. trading partners.

But the draft bill highlights how even as President Trump and his aides are seeking to calm nervous financial markets by talking up the prospects of a resolution to the president’s trade war with China, hawks in the administration continue to look for ways to open new fronts.

According to the draft obtained by Bloomberg, the bill would allow the president to impose tariffs on products “if [he] determines” that either tariff or non-tariff barriers on that product are higher than the U.S.’s. It would call for negotiations with other countries and for Congress to be notified — but it would give lawmakers no power to vote on any tariff move.

“Oh, we aren’t going to give him any greater authority, we’ve already delegated too much,” Grassley told reporters on Wednesday in response to a question on the Bloomberg News report, adding that his view on tariffs “is a little bit different than the president’s.”

The U.S. now has the authority to unilaterally increase tariffs on individual products that it finds are being dumped, or imported below cost, into the U.S. President Trump has also used previously dormant trade laws to impose tariffs on steel and aluminum in the name of protecting national security, and to target China over its alleged theft of intellectual property.

But the U.S. was one of the architects of the General Agreement on Tariffs and Trade and its successor, the World Trade Organization, which together for decades have governed how members can levy import taxes.

Under the “most favored nation” principle at the WTO, signatories cannot impose tariffs unilaterally on a product from a single country except under certain limited conditions such as to combat dumping or illegal subsidies.

Commerce Secretary Wilbur Ross and others in the Trump administration have complained in the past about the MFN system for how it limits their ability to impose tariffs and has forced the president to use other tools.

But the move also goes against what appears to be the current mood in Congress where, faced with complaints from businesses affected by the new tariffs, members have been considering how they might restrain the president’s powers under even the limited tools he has used so far.

Several efforts to that effect failed in the last Congress, but Grassley said that President Trump’s threat to impose tariffs on imports of cars and auto parts is motivating him to examine and potentially limit the president’s trade powers.

“I do not believe that we should alienate our allies with tariffs disguised as national security protections. And certainly not when it comes to trade in automobiles and auto parts,” Grassley said in a statement Wednesday. “For this reason, I intend to review the president’s use of power under Section 232 of the Trade Act of 1962, which grants the president broad legal authority to impose tariffs in the name of national security.”

Pro-trade Democrat Rep. Ron Kind of Wisconsin on Thursday also weighed in on the new tariff bill. “Wisconsin has lost $139 million to import tariffs since this Administration got its hands on trade and started this unnecessary trade war. In what world would this be a good idea?” Kind said Thursday on Twitter.

The White House has been working with a few House Republicans on the plan but hasn’t consulted with the congressional committees of jurisdiction, people familiar with the matter said.

Jennifer Hillman, a former WTO judge who now teaches trade law at Georgetown University, said the bill would violate a number of WTO provisions. It also would give any American president huge scope to impose tariffs on the more than 10,000 different classes of products the U.S. uses, she said.

“The number of items in which there is a discrepancy between U.S. tariff rates and foreign tariffs is huge. Which ones are we going after?” she said. “That is not specified in the bill and would give the president massive authority to favor his friends and his pet industries and ignore others.”