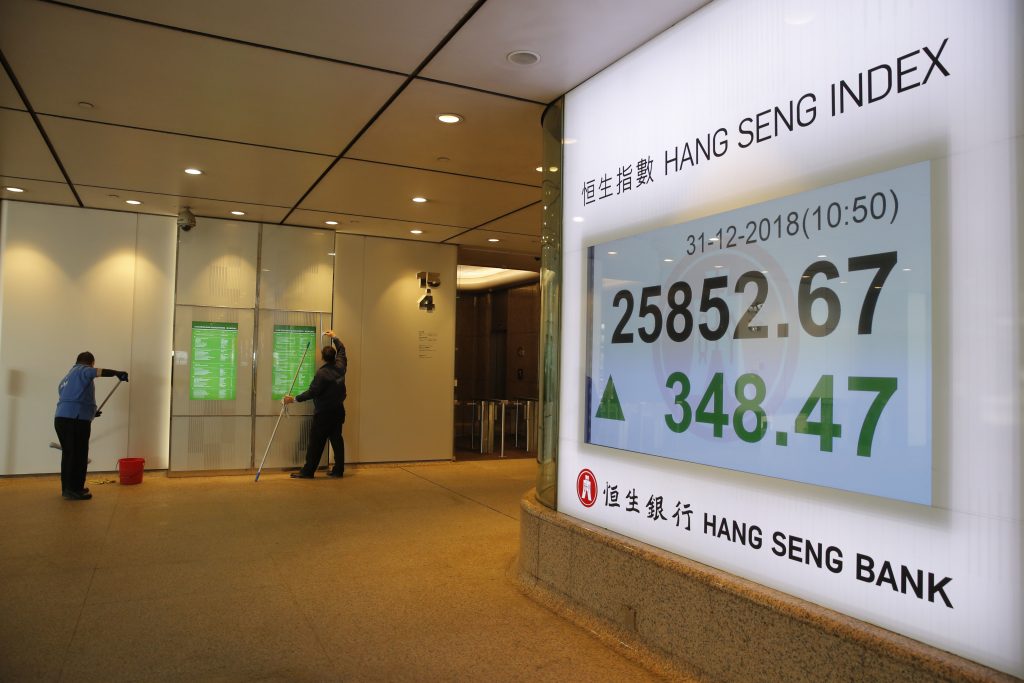 Asian stocks rose on Monday as hints of progress on the Sino-U.S. trade standoff provided a rare glimmer of optimism in what has been a rough year-end globally for equities.

Survey data out of China, however, proved unhelpfully mixed, with manufacturing activity contracting for the first time in two years even as the service sector improved.

Sentiment had brightened just a touch when President Donald Trump said he held a “very good call” with China’s President Xi Jinping on Saturday to discuss trade and claimed “big progress” was being made.

Chinese state media were more reserved, saying Xi hoped the negotiating teams could meet each other half way and reach an agreement that was mutually beneficial.

The Wall Street Journal reported that the White House was pressing China for more details on how it might boost U.S. exports and loosen regulations that stifle U.S. firms there.

MSCI’s broadest index of Asia-Pacific shares outside Japan added 0.6 percent, but were still down 16 percent for the year.

E-Mini futures for the S&P 500 firmed 0.7 percent. Spread-betters pointed to a positive start for Europe with London’s FTSE futures up 0.4 percent.

Japan’s Nikkei was closed for a holiday having ended 2018 with a loss of 12 percent.

Across the region, the worst performer of the year was the index of Chinese blue chips, which lost a quarter of its value. The only major market in the black for the year was India, where the BSE was ahead by almost 6 percent.

The story was much the same across the globe, with the vast majority of the major stock indices in the red.

“Simply looking at the markets would suggest that the global economy is headed into recession,” said Robert Michele, chief investment officer and head of fixed income at J.P. Morgan Asset Management.

“However, while we agree the global economy is in a growth slowdown, we don’t see an impending recession,” he added, in part because the Federal Reserve could provide a policy cushion.

“Already, commentary out of the Fed suggests that it is nearing the end of a three-year journey to normalize policy,” argued Michele.

Indeed, Fed fund futures have largely priced out any hike for next year and now imply a quarter point cut by mid-2020.

The Treasury market clearly thinks the Fed is done on hikes, with yields on two-year paper having fallen to just 2.52 percent from a peak of 2.977 percent in November.

The $15.5-trillion market is heading for its biggest monthly rally in 2½ years, according to an index compiled by Bloomberg and Barclays.

The precipitous drop in yields has undermined the U.S. dollar in recent weeks. Against a basket of currencies, it was on track to end December with a loss of 0.8 percent but was still up on the year as a whole.

The euro is on track to end the month on a weaker note at $1.1425, nursing losses of almost 5 percent over the year to date.

That was trivial compared with the hit oil prices have taken in the last couple of months, with Brent down almost 40 percent since its peak in October. The crude benchmark was last up 59 cents at $53.80 a barrel but down 20 percent for the year. U.S. crude futures nudged up 48 cents to $45.81.

Gold was ending the year on a high note after rallying almost 5 percent in the past month to stand at $1,278.57 an ounce.