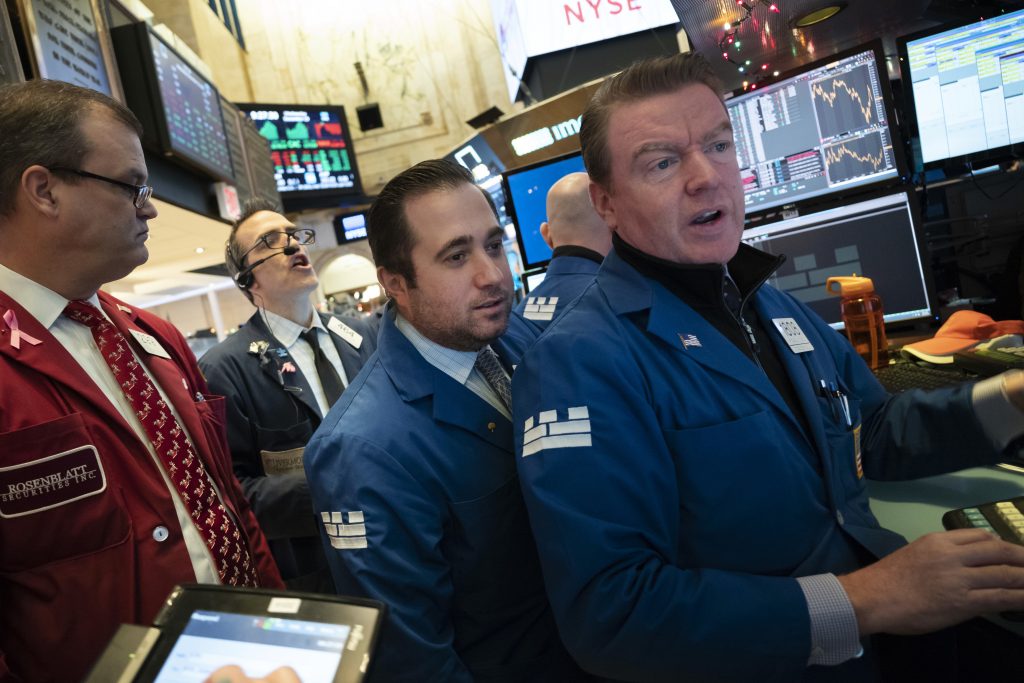 U.S. stocks have rapidly surrendered an early surge and are wavering between small gains and losses Wednesday afternoon as investors react to the Federal Reserve’s latest interest rate plans.

Stocks were significantly higher before the Fed raised interest rates. Internet, technology and consumer-focused companies are down while a partial recovery in oil prices is pulling energy companies higher following huge losses a day earlier.

The Dow Jones Industrial Average is little changed. Immediately before the Fed’s announcement at 2 p.m., it was up 381 points.

FED FOCUS: As expected, the Fed raised its key interest rate for the fourth time this year while suggesting it will go slower in raising rates next year. The quarter-point hike, to a range of 2.25 percent to 2.5 percent, lifts the Fed’s benchmark rate to its highest point since 2008. The increase will mean higher borrowing costs for many consumers and businesses.

The Fed is now forecasting two increases in rates in 2019 instead of three. The central bank now expects the long-term level of its main interest rate will be 2.8 percent, down from 3 percent.

FROWNY FACE: Facebook fell after the New York Times reported that the social media network gave companies more access to users’ personal data than it has previously said. The report said Facebook had arrangements with more than 150 companies including Microsoft, Amazon, Spotify and Netflix that let different companies have access to people’s accounts and information without their consent.

Separately, the District of Columbia sued Facebook for allowing Cambridge Analytica, a data-mining firm working for the Trump campaign, to improperly access data from as many as 87 million Facebook users.

Facebook lost 5.9 percent to $135.23. It’s down 38 percent since late July on concerns about a slowdown in user growth, multiple privacy and safety scandals, as well as the possibility of increased regulation in the future.

LOST IN THE MAIL: FedEx said international shipping, especially in Europe, fell in its latest quarter, while the U.S.–China trade dispute is also affecting its business. The shipping company posted a smaller profit than analysts expected and said it will cut spending and offer buyouts to some workers to help make up for the shaky results.

“The peak for global economic growth now appears to be behind us,” Chief Marketing Officer Rajesh Subramanian said in a conference call with investors.

ENERGY: Oil prices turned higher after plunging on worries about rising supplies and weakening global growth, which could weigh on demand. Benchmark U.S. crude climbed 2.1 percent to $47.20 a barrel in New York. It dropped 7 percent Tuesday and closed at a 16-month low, and has fallen almost 40 percent since Oct. 3. Brent crude, used to price international oils, was up 0.5 percent to $56.55 a barrel in London.

Wednesday’s recovery helped energy company stocks, which are trading at their lowest levels since early 2016.

MEDICINE CABINET MERGER: Drugmakers GlaxoSmithKline and Pfizer said they will combine their consumer product businesses, bringing Pfizer’s Advil pain medicine and Centrum supplements together with Glaxo’s Sensodyne toothpaste. GlaxoSmithKline of Britain will own two-thirds of the combined company. Its stock gained 1.9 percent to $37.82 while Pfizer edged up 0.5 percent to $42.63.

EUROPE: European stocks rose after Italy’s government reached an agreement with the European Commission on its budget plans. That avoids a legal dispute over the government’s plan to ramp up spending. The Italian FTSE MIB jumped 1.6 percent. Britain’s FTSE 100 rose 1 percent while Germany’s DAX added 0.2 percent and the CAC 40 in France rose 0.5 percent.