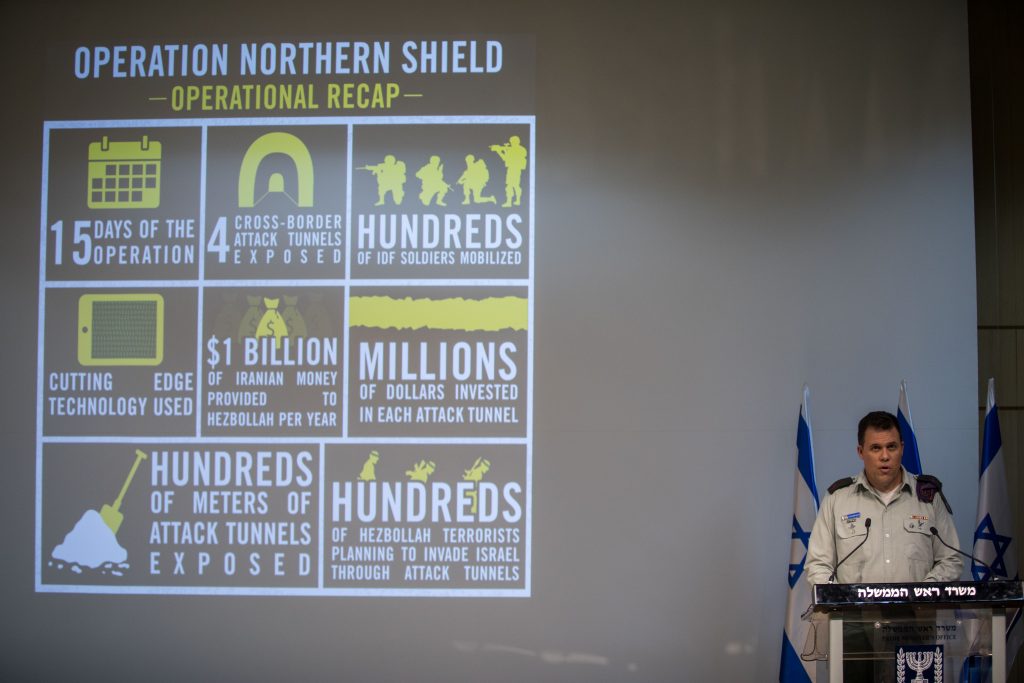 On Wednesday, the IDF confirmed that a Hezbollah terror tunnel discovered over the weekend crossed from southern Lebanon into Israel near the community of Zarit.

The tunnel, which was dug from the western area of the Shiite village of Ramyeh infiltrated several feet into Israeli territory and like the other tunnels had not be operational.

On Wednesday, Prime Minister Binyamin Netanyahu spoke at a press conference in the Knesset, addressing the recent discovery of terror tunnels along the Lebanese border, ahead of a planned United Nations Security Council meeting on the issue.

Netanyahu called for concrete steps to be taken by the U.N.’s border monitoring force, UNIFIL, to dismantle the tunnels. He rejected suggestions by Hezbollah that the tunnels were built for ‘self-defense,’ saying they were intended for terror attacks and an effort to ‘conquer’ part of northern Israel.

The tunnels, said Netanyahu, were to have been used to “penetrate our territory, kidnap our people, including our civilians, murder civilians, and conquer a northern piece of the Galilee. This is not just an act of aggression, but an act of war.”

“This is not a right of self-defense, this is part of a propagation of aggression towards the annihilation of Israel and the conquest of its territory, declared by Hezbollah.”

“Hezbollah is a tool of Iran. Both are committed to our destruction.”

“They commit war crimes against our civilians, and against Lebanon’s civilians.”

“The fact that the Lebanese army is doing nothing means that they are either unable, or unwilling, or both,” the prime minister said. “What has to be done now is to have UNIFIL do something serious. We await to see that.”

Netanyahu said that the international community should hold Iran, Hezbollah and Lebanon accountable and heighten sanctions against the terror group. Hezbollah is using “every third house” in southern Lebanon for terror purposes, he said.