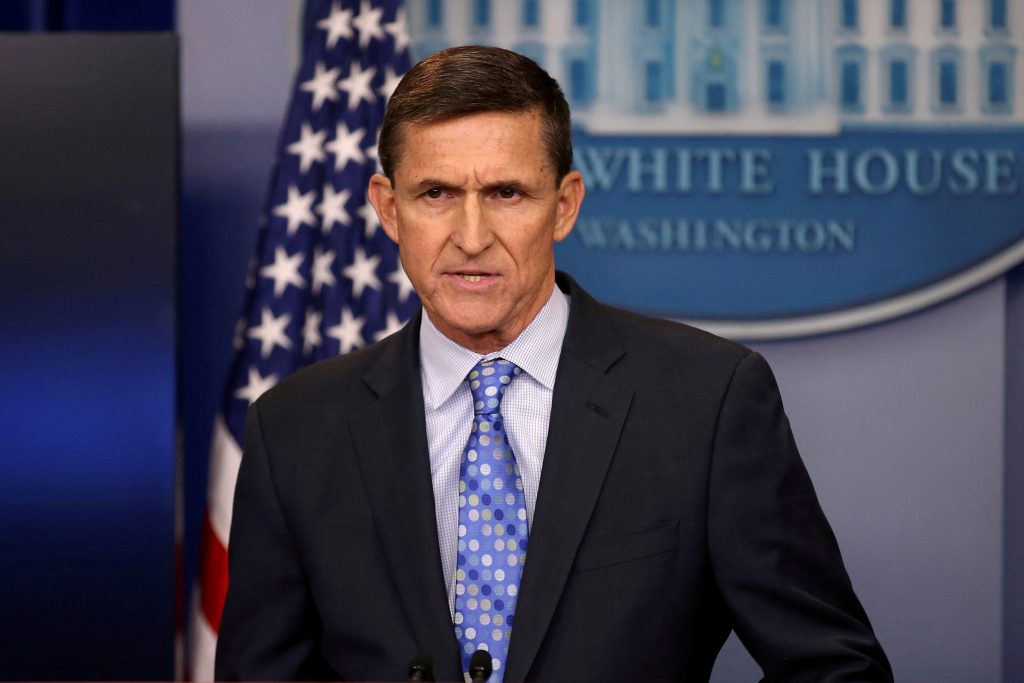 Mueller’s office said in a court filing Flynn assisted with the investigation “concerning links or coordination between the Russian government and individuals associated with the Trump campaign.”

Flynn also provided “firsthand information about the content and context of interactions between the transition team and Russian government officials,” the filing said.

Citing 19 interviews provided by Flynn to it and other federal prosecutors, Mueller’s office asked a federal judge not to sentence him to prison.

Prosecutors said Flynn also provided help on other criminal investigations, although those details were blacked out to keep information about ongoing probes secret.

David Weinstein, a former federal prosecutor, said the redacted portions likely pointed to impending charges against others in Trump’s orbit and raised doubts about speculation that Mueller was nearing the end of his probe.

“It must relate to other people who he believes are involved in the overall conspiracy or collusion that he is tasked with investigating,” Weinstein said. “If he was almost done there would have been virtually nothing blacked out.”

Flynn, who held the White House job for only 24 days, pleaded guilty in December 2017 to lying to the FBI about his contacts with Russia. He will be sentenced in the U.S. District Court for the District of Columbia on Dec. 18.

He is so far the only member of Trump’s administration to plead guilty to a crime uncovered during Mueller’s wide-ranging investigation into Russian attempts to influence the 2016 U.S. election and potential collusion by Trump aides.

Mueller’s probe, which could threaten Trump’s presidency, has already ensnared 32 individuals and three Russian firms. He is expected to issue a report on his findings possibly some time next year.

Trump has called Mueller’s probe a witch hunt and has denied colluding with Russia. Moscow denies meddling in the elections.

Adam Schiff, the top Democrat on the House of Representatives Intelligence Committee, which is also investigating allegations of Russian collusion, said the memo indicated Flynn had provided a significant boost to Mueller’s probe.

“That most of the details are redacted signals he has given far more than we or the President may know,” Schiff said on Twitter.

Flynn, a retired army general, was forced to resign as national security adviser in February 2017 after he was found to have misled Vice President Mike Pence about discussions he had with Russia’s then-ambassador, Sergei Kislyak.

Under a plea bargain deal, Flynn admitted in a Washington court that he lied when asked by FBI investigators about conversations with Kislyak just weeks before Trump took office.

Flynn’s crime of lying to the FBI carries a statutory maximum sentence of five years in prison. His plea agreement states, however, that he is eligible for a sentence of zero to six months and can ask the court not to impose a fine.

Mueller’s office has had varied degrees of success with the level of cooperation it has received from defendants who have pleaded guilty.

Cohen has also cooperated with the probe. He is due to be sentenced on Dec. 12 after pleading guilty to charges brought by prosecutors in New York including tax evasion and campaign finance violations. His lawyer has asked the court to consolidate the sentencings for that case and the recent one brought by Mueller’s office.

Manafort, in contrast, breached his plea deal by lying repeatedly to the FBI and Mueller’s team, prosecutors alleged in a court filing last week.

Mueller is due to file court papers on Friday laying out his team’s case for why Manafort should lose any credit when he is sentenced because of his alleged failure to accept responsibility for his crimes.

David Berger, a partner with Wilson Sonsini Goodrich & Rosati, said Mueller was sending an important message to Cohen and other cooperators by supporting Flynn and coming down hard on Manafort, who could now face the rest of his life in prison.

In addition to his cooperation with various probes, Mueller noted Flynn’s record of military and public service and argued that it distinguished him “from every other person who has been charged” as part of his investigation. “Michael Cohen wants to serve no prison time. He has now been given a road map,” Berger said.