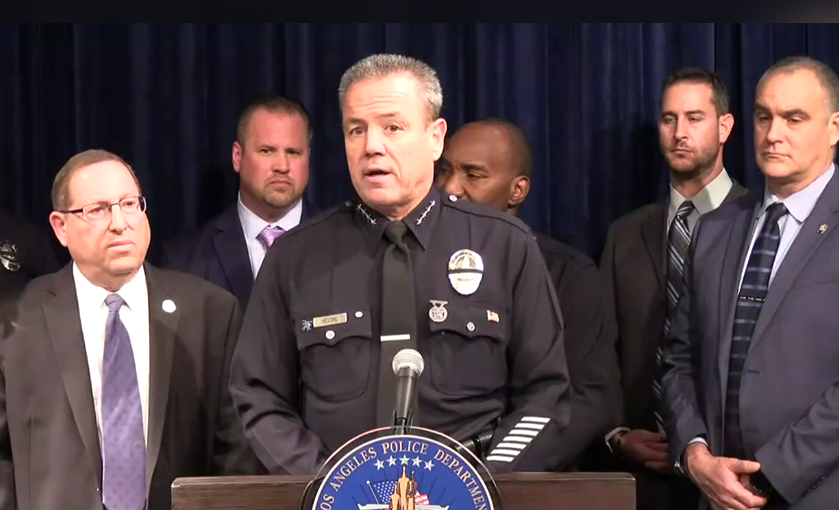 A man is facing a hate-crime charge after attempting to run down two Jews in his vehicle, in Los Angeles on Friday night.

At 9:30 p.m. Friday, a crowd of Jewish men were standing outside Bais Yehuda shul at La Brea and Oakwood Avenues, where a bar mitzvah celebration was being held. Two of the men, aged 38 and 57, then left the hall, heading to another shul for a shalom zachar.

“We saw a guy driving on the opposite side of the street; he was beeping, which caught our attention,” the 38-year-old, who asked to remain anonymous, told Hamodia. The driver, who was screaming curse words along with the word “Jew,” was driving slowly and went through a red light.

“When he got past the red light, he swung a hard U-Turn, and went right at us at a high rate of speed,” said the near-victim, who hid behind a lamppost, while his friend hid behind an electric box and then ran into the shul.

The driver then “reversed, and tried hitting me again,” the man recalled. “But he missed, and sped off down the street at a high rate of speed. We saw him run through three stop signs, before crashing into another vehicle.” No one in either vehicle was hurt.

The driver was arrested and charged with assault with a deadly weapon as a hate crime. Police also found a knife in his vehicle.

Police say Mohamed, who was not under the influence of alcohol or drugs, was likely a lone-wolf attacker. Though they have no reason to believe that he was acting as part of a larger plot, they will investigate his connections with other people, including his travel, background, and social-media accounts.

Officials noted that the attack comes as hate-inspired assaults are on the rise across the country.

“Just four weeks after the terrible attacks in Pittsburgh,” said Moore, “we see this action outside a synagogue here in Los Angeles, where [members of] a congregation … standing on a public sidewalk, like many Angelinos were this past holiday weekend, were suddenly and viciously attacked.”

“I look forward to an aggressive and active prosecution of this individual,” said Moore. “Hate in America is on the rise. That has to change. And a portion of that is that every community recognize[s] that when such acts occur,” authorities “will bring the full weight of the law to hold accountable” the perpetrators.

“We will continue to fight anti-Semitism and bigotry, and we will continue to shine a light on the darkness of hate,” Councilman Paul Koretz, in whose district the assault occurred, said at the press conference Monday. Los Angeles is “built on a foundation of so many heritages and faiths, and that’s what makes our city vibrant and so rich.”