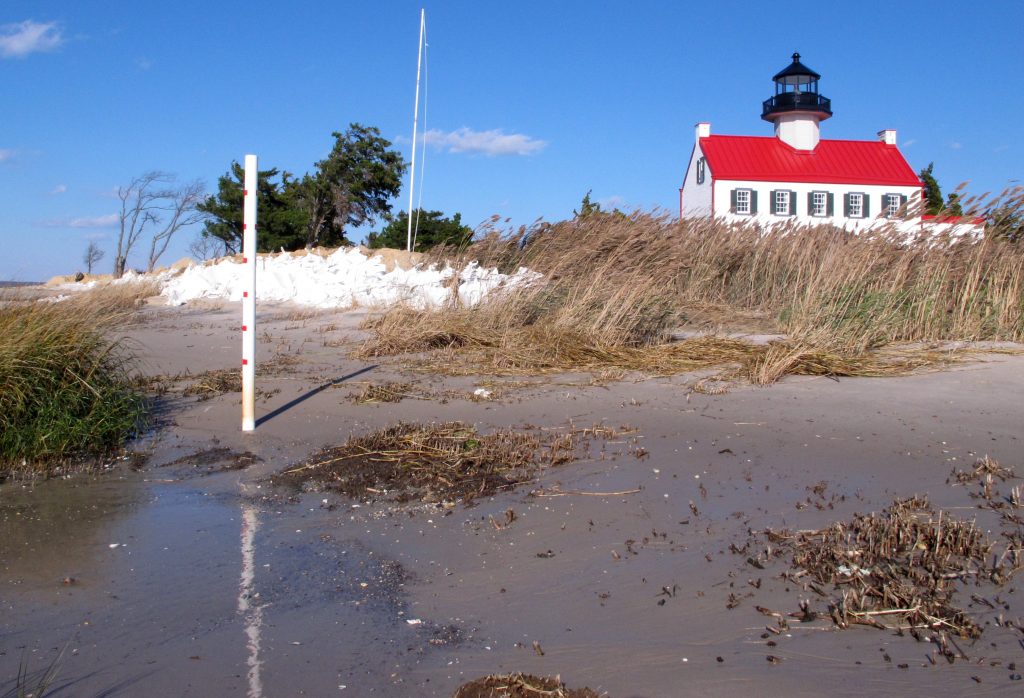 Rising seas and erosion are threatening lighthouses around the U.S. and the world. Volunteers and cash-strapped governments are doing what they can, but the level of concern, like the water, is rising.

New Jersey’s East Point Lighthouse has been lighting up Delaware Bay for the better part of two centuries. But those same waters that the lighthouse helped illuminate might bring about its demise.

With even a moderate-term fix likely to cost $3 million or more, New Jersey officials are considering what to do to save the lighthouse. Nancy Patterson, president of the Maurice River Historical Society, says something needs to be done now.

State and local governments routinely shore up the perimeter of the lighthouse property with 3,000-pound sandbags and hastily-bulldozed earthen walls. During normal conditions, the bay is about 40 yards from the lighthouse; aerial photos from 1940 show at least four times as much beach between the lighthouse and the bay as there is now.

And during storms, the surf pounds against an earthen wall just 10 yards from the lighthouse’s front steps.

She recently led a save-the-lighthouse rally to call attention to its plight and push the state Department of Environmental Protection to do something to save it before it falls into the bay.

It’s a threat affecting lighthouses around the country and the world, including those in low-lying areas being inundated by water, as well as those on bluffs or cliffs being eroded by storms and rising sea levels.

“It’s happening faster than anybody had predicted,” said Jeff Gales, executive director of the U.S. Lighthouse Society in Hansville, Washington.

While some of the lighthouses continue to be relied upon for navigation, others have been supplanted more modern technology, and are treasured more for historical and tourism purposes.

Climate change hastened by manmade greenhouse gases is not only melting polar ice, thus raising sea levels, but the warmer waters are expanding and some landforms are sinking.

Globally, sea levels have been rising over the past century, according to the National Oceanic and Atmospheric Administration, and the rate has increased in recent decades. In New Jersey, seas have risen by 1.3 feet over the past 100 years, said Benjamin Horton, a Rutgers University professor and leading expert on climate change and sea level rise. That is a faster pace than for the past 2,000 years combined, he said.

Horton and other Rutgers researchers project that by 2050, seas off New Jersey will rise by an additional 1.4 feet.

Tim Harrison is the editor of Lighthouse Digest, a Maine-based publication that maintains a “Doomsday List” of 53 lighthouses around the U.S. deemed to be in danger of being lost due to storms, erosion or other causes.

“Lighthouses were built for one purpose: to save lives,” he said. “Now it’s our turn to step up save these lighthouses.”

Rising seas have already forced the relocation of several lighthouses. In 1999, the National Park Service moved the Cape Hatteras Lighthouse in Buxton, North Carolina, 2,900 feet inland, at a cost of $11.8 million. In 1993, the Southeast Lighthouse on Block Island, Rhode Island, was moved 300 feet inland.

In 2014 the Cape San Blas Lighthouse was moved from the edge of a storm-prone peninsula on Florida’s Gulf Coast to a park in Port St. Joe. A year later, the Gay Head Lighthouse on Massachusetts’ Martha’s Vineyard was moved 129 feet back from an eroding cliff.

Others were not so lucky. The Galveston Jetty Lighthouse in Texas and the Sabine Bank Lighthouse in Louisiana were lost to storms or rising seas, and the Kauhola Point Lighthouse on Hawaii’s Big Island was demolished after erosion nearby was deemed too severe to save it, Harrison said.

Lighthouses around the country considered to be in danger from rising seas include the Sand Island Lighthouse at the mouth of Mobile Bay in Alabama, the Morris Island Lighthouse near Charleston, South Carolina, and the New Point Comfort Lighthouse in Virginia.

Around the world, encroaching seas are drawing nearer to the Orfordness Lighthouse in Suffolk, England; the Troubridge Island Lighthouse in South Australia; and the Kiipsaar Lighthouse in Estonia. In 2010, the Half Moon Caye Lighthouse in Belize was destroyed by a storm.

There are few easy answers, financially or scientifically. The East Point Lighthouse is already on the highest spit of land around, which is only a few inches above sea level, so moving it is not an option. Nor is constantly dumping and plowing more sand in front of it.

Patterson wants some sort of bulkhead or barrier erected between the bay and the lighthouse to blunt the force of the waves.

Larry Hajna, a spokesman for the New Jersey Department of Environmental Protection, acknowledges the lighthouse has been “very vulnerable to storms due to erosion” for years. And he realizes the sandbags the state and local governments keep plopping on the shoreline are a stop-gap measure at best.

But while affirming the state’s interest in saving the lighthouse, he notes that moving or protecting it with rock-filled cages could cost several million dollars.

Because of the high cost of moving or protecting the lighthouses, volunteer preservation groups often partner with governments to maintain them; one has spent at least $5 million on the Morris Island Lighthouse in South Carolina. And cash-strapped governments often can’t spare funds to save lighthouses.

Patterson, the New Jersey lighthouse advocate, says a barrier needs to be built near the East Point Lighthouse immediately.

“This history matters,” she said. “We need to do something — now — while there’s still something to save.”