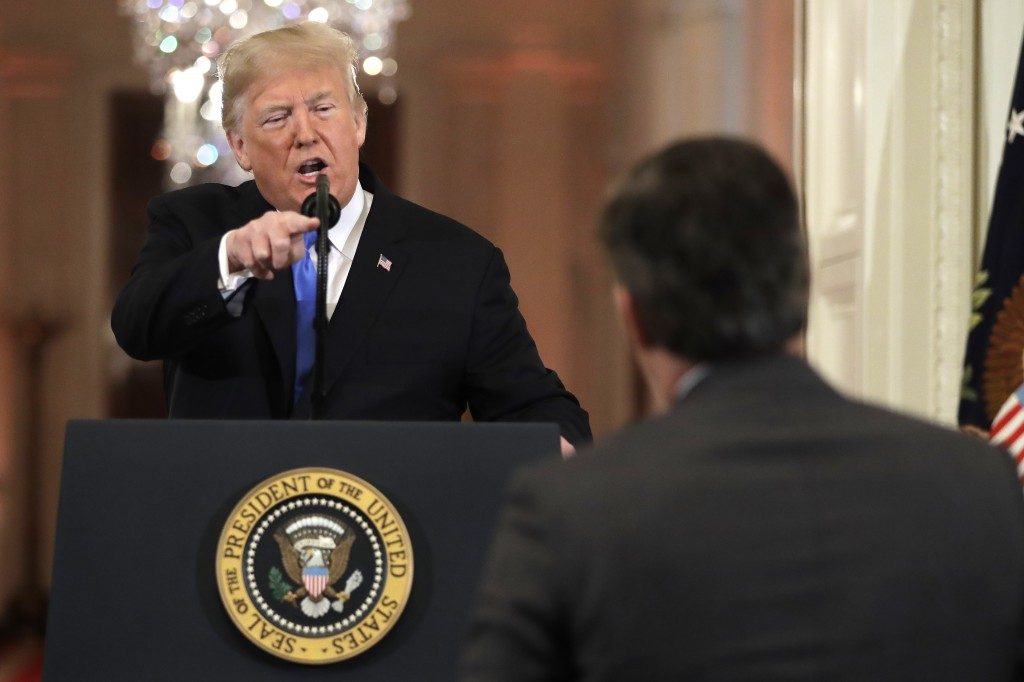 In what is shaping up to be an unprecedented battle between the president and the mainstream media, it was the latter who won the first round on Friday, when a U.S. District Court Judge ordered the White House to restore CNN correspondent Jim Acosta’s press credentials.

It is noteworthy that the Judge, Timothy Kelly, did not rule whether or not the revocation of the journalist’s White House pass violated his rights under the First Amendment, which was thought to be the primary basis for the legal challenge.

Rather, the judge found that CNN was likely to prevail in its Fifth Amendment “due process” claim — that the White House had not provided Acosta with sufficient explanation before revoking the credentials, and didn’t give him an opportunity to be heard before doing so.

In response, the White House reinstated the correspondent’s pass and established new rules under which reporters are permitted to ask only one question each when called upon at a news conference. Follow-up questions would be allowed only at the discretion of the president.

While much has been made of the fact that this is the first administration which has pulled the credentials of a reporter, what is generally being ignored is the fact that never before in the history of the White House have reporters crossed so many lines and exhibited such insolence.

While other reporters — including Helen Thomas of UPI and Sam Donaldson of ABC — were known for their aggressive questioning techniques, they still showed a certain respect for the office of the presidency.

In an era when sensationalism and sound bites reign supreme, that respect has dwindled drastically. In the case of Mr. Acosta, it has entirely disappeared.

A review of the exchange Acosta had with the president that led up to the latest chain of events shows that, contrary to the claims by CNN, not only did the president answer his original question — which was more of a sharp criticism of the president’s describing the immigrant caravan as an “invasion” than an actual query — he actually continued to respond to Acosta’s follow-up comments and questions, and went back and forth with him no fewer than seven times. It was at that point that the president finally ran out of patience and told him, “Okay, that’s enough.”

Acosta ignored the message, and even after the president called on another reporter, he continued to ask an additional question. The president repeated those two words no fewer than five times, and yet Acosta still refused to give up; he actually answered the question and then instructed Acosta to “put down the mike.”

In what can only be described as brazen chutzpah, the reporter continued to ignore the president.

When asked by reporters on Friday about the court ruling, the president declared that “people have to behave,” and explained that the rules and regulations being written up were all about establishing decorum.

“You can’t take three questions and four questions, and just stand up and not sit down. …. We want total freedom of the press; that’s very important to me. It’s more important to me than anybody would believe. But you have to act with respect. You’re in the White House. And when I see the way some of my people get treated at press conferences, it’s terrible.”

There is something awfully ironic about the idea that the president of the United States — the world’s sole remaining superpower — should have to threaten that he or his staff would walk out of a news conference if reporters fail to show respect and follow instructions. While it is undoubtedly true that an unfettered press is the watchdog of a democracy, that doesn’t include reporters being downright rude and impudent to the occupant of the oval office.

Ever since President Trump stunned the world by winning the presidency, CNN and other media outlets have made no effort to disguise their deeply rooted hostility and bias towards this administration. In the process, they have lost any credibility when it comes to complaining over how they are being treated by the White House. After showing that they have no compunctions about breaking every rule and shattering longstanding protocol, they are simply getting a taste of their own medicine.