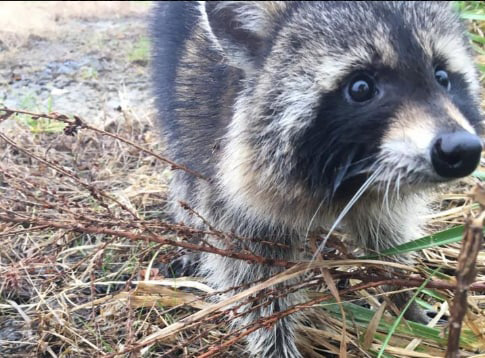 Rabid animals are, of course, no laughing matter. The rabies virus can infect the central nervous system, resulting in disease and death, according to the Centers for Disease Control and Prevention. But that happens after a host of increasingly scary symptoms: partial paralysis, agitation, hallucinations, hydrophobia. A British man and two children died in Morocco after they were bitten by a rabid cat.

So it was not surprising that when people in the city of Milton, West Virginia, saw raccoons behaving weirdly, they involved the local police.

Officers staked out the area where the suspect animals were hanging out, looking for any signs of the masked perpetrators.

But when they caught two of them, they realized they were dealing with a different kind of issue.

The raccoons weren’t rabid. They were drunk.

The raccoons, apparently, had been feasting on crab apples that had fermented on the tree, causing the small animals to walk around “staggering and disoriented,” police said.

“Turns out they appear to be drunk on crab apples,” police said in their official statement to the community.

The apprehended animals were held in custody and allowed to sober up in what can only be deemed a raccoon drunk tank.

Then they were released into the wild, but not before some enterprising officer took a picture of the animal, showing it to be dazed, woozy, more than a little out of it. They named one drunk raccoon Dallas and released both near the woods.

And with that, Dallas joined a long line of animals that have made headlines for public intoxication.

Officers in Gilbert, Minn., for example, received reports of under-the-influence birds “flying into windows, cars and acting confused,” Police Chief Ty Techar wrote. An early frost meant that berries had fermented before the birds flew south for the winter, according to The Washington Post’s Antonia Noori Farzan, and birds were eating them and getting drunk.

But all birds weren’t equally affected, the chief wrote: “It appears that some birds are getting a little more ‘tipsy’ than normal,” he wrote. “Generally, younger birds’ livers cannot handle the toxins as efficiently as more mature birds.”

Residents who thought that perhaps they were in a film were amused but also relieved:

“This explains why I have hit 7 birds with my car this week,” one person commented on the chief’s post.