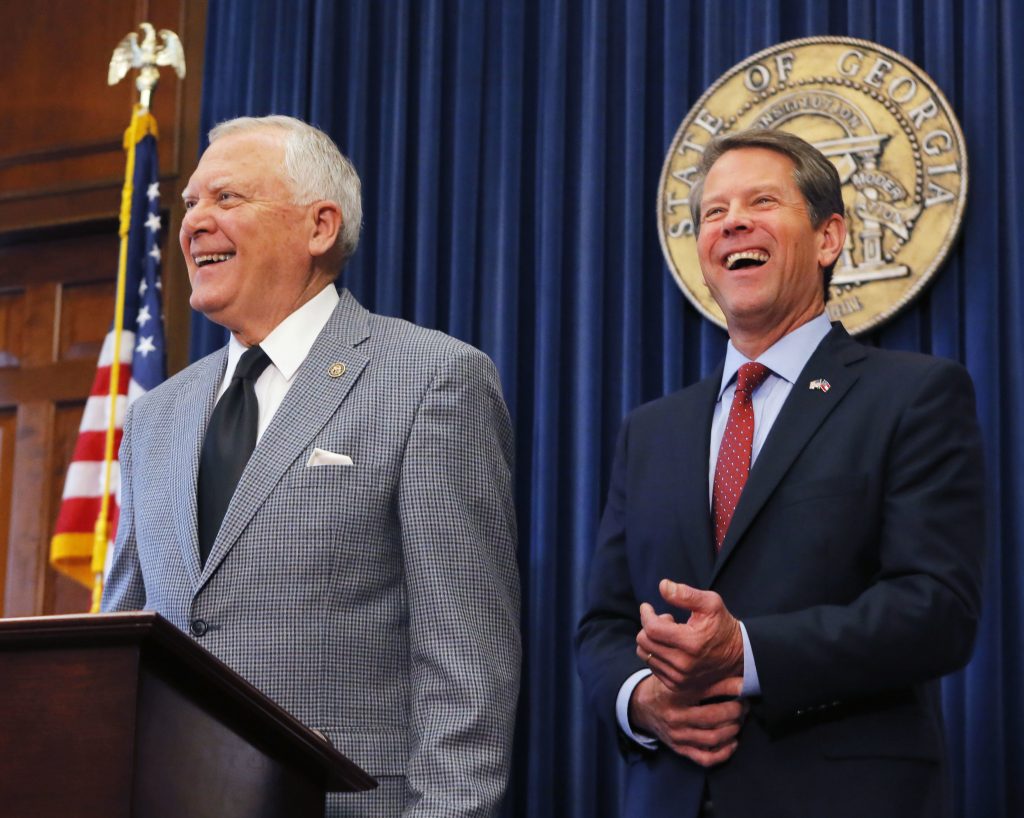 Ahead by more than 60,000 votes days after Georgia’s gubernatorial election, Republican Brian Kemp pushed for Democrat Stacey Abrams to concede Saturday as civil rights groups urged her to stay in the fight.

Kemp’s campaign issued a statement that said it was mathematically impossible for Abrams to even force a runoff, much less win outright. It called Abrams’ refusals to concede “a disgrace to democracy” that “completely ignore the will of the people.”

But members of civil rights groups including the Atlanta-based Southern Christian Leadership Conference and the National Association for the Advancement of Colored People held a small rally urging Abrams to keep fighting until every vote is counted.

“That is a promise she made,” said Ben Williams, president of the Cobb County branch of the SCLC, founded by the late Rev. Martin Luther King Jr.

Erick Allen, a black Democrat newly elected to the Georgia House, said allegations of voter suppression and questions about Election Day problems could dog Kemp as governor if he eventually prevails.

“The erosion in trust is done,” said Allen.

Abrams is trying to become the first black woman elected governor in the United States, while Kemp is attempting to continue GOP dominance in a diversifying state that could be a battleground in the 2020 presidential election.

In a statement Saturday afternoon, she said she had met with voters who experienced difficulties casting ballots. She said her campaign had heard stories of voters turned away from the polls, students and military members who requested absentee ballots that never arrived or were “lost in the mail” — and first-time and longtime voters who found their names were “no longer on the list.”

She vowed to continue to fight.

“I am fighting to make sure our democracy works for and represents everyone who has ever put their faith in it. I am fighting for every Georgian who cast a ballot with the promise that their vote would count,” Abrams added.

Unofficial returns show Kemp with 50.3 percent of almost 4 million total votes, a roughly 63,000-vote lead over Abrams. The margin is enough for an outright Kemp victory if totals remain the same, but it’s a tight race considering the large turnout. Abrams has argued that tens of thousands of provisional and military ballots could need to be counted before the race is over.

The Kemp campaign said a maximum of 17,495 provisional and military ballots remain to be counted. The Abrams campaign contends at least 30,823 votes remain, including nearly 27,000 provisional ballots; that could be enough to prompt a recount.

The Associated Press has not declared a winner. AP will reassess the race Tuesday, the deadline for counties to certify election results to the state.

Abrams’ supporters and volunteers made a push to get people who cast provisional ballots on Tuesday to provide information required to count their ballots by a Friday deadline, but it wasn’t clear how many did so.

The Kemp campaign said it didn’t matter because there were far too few outstanding ballots for Abrams to erase his lead.

The Abrams campaign attempted to reserve advertising time in case she can make it into a runoff with Kemp that would be held Dec. 4, but Atlanta TV station WSB said it wouldn’t accept any commercials until votes are certified.

After each of Georgia’s 157 counties certifies final returns by Tuesday, the state must certify a statewide result by Nov. 20.