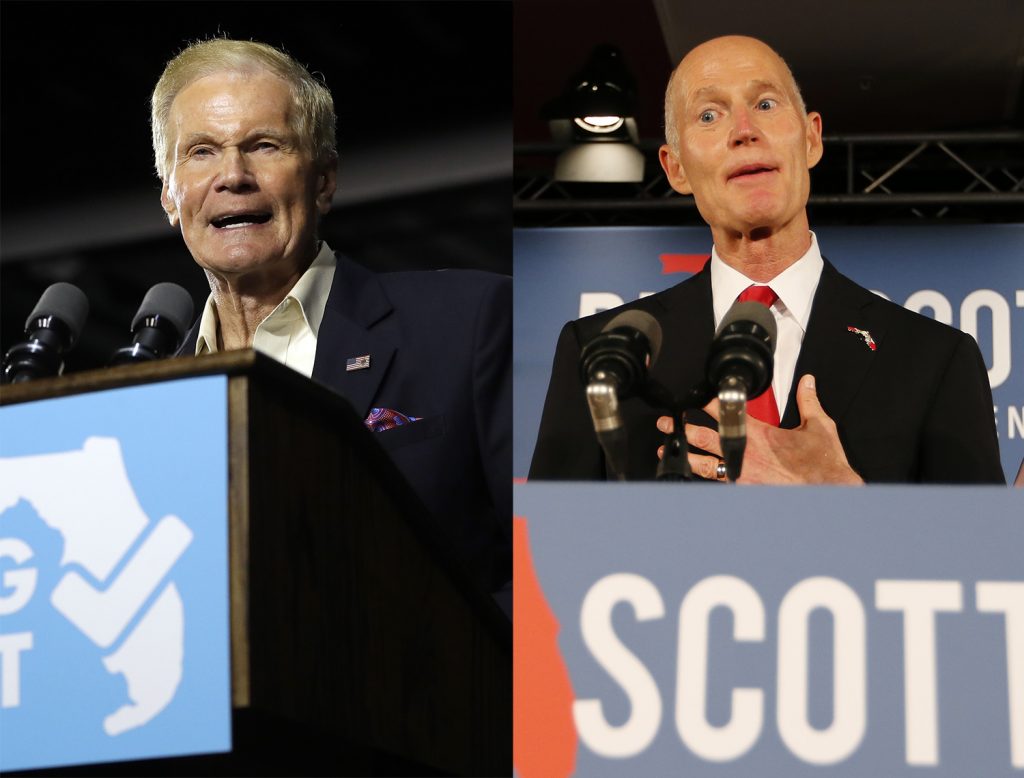 Did Republican Rick Scott speak too soon when he declared victory in his U.S. Senate race last night?

That’s within the margin that could launch a recount.

Nelson declared Wednesday morning that is exactly what he is expecting.

“We are proceeding to a recount,” Nelson said in a brief statement, his first public remarks since results started coming in Tuesday.

But a recount is not automatic.

If the two candidates are separated by one-half of a percentage point or less, state law allows for a machine recount of the results. Only Secretary of State Ken Detzner — an appointee of Scott — can call for a recount.

If a machine recount ends with the two candidates separated by one-quarter of a percentage point or less, then a manual recount would take place. That’s a time-consuming process of manually counting the ballots.

If the results are that close, then every possible vote becomes more critical, including overseas and military ballots, provisional ballots and vote by mail ballots that have defects such as a missing or non-matching signature.

Scott claimed victory just before midnight on Tuesday, taking the stage to chants of “Senator Scott” with nearly all precincts counted and a comfortable 60,000 vote lead. However, the Associated Press had not called the race as of Wednesday morning.

Confusion at Nelson headquarters left reporters and a handful of straggling supporters believing the three-term Senator had conceded. Around 12:15, a campaign staffer briefly muted CNN and over a microphone told the crowd that, based on a number of media reports, the race had been called for Scott.

“This is obviously not the result Senator Nelson’s campaign has worked hard for,” Pete Mitchell said in a posture of defeat. “The senator will be making a full statement tomorrow to thank all those who rallied for his cause.”

Bartenders had already packed up the Maker’s Mark, and TV crews broke down their cameras. The already quiet room emptied quickly, with Nelson staff out of sight as news spread of Nelson’s apparent fall.

But after 1 a.m. Wednesday, the campaign put out a statement clarifying that Nelson was still waiting for all the ballots to be counted.

The additional votes appear to have come from Broward County, where there were reports of difficulties sending in results.

Whatever the outcome, it’s a fitting finish for a race that has been neck-and-neck since the first poll of 2018 dropped in early February. Nelson by one over Scott, it said. A statistical tie.

In the nine months since, Nelson and Scott campaigned on health care and immigration, red tide and blue-green algae, Russian hacking and Puerto Rico recovery, Nelson’s missed Senate votes and Scott’s intertwined investments, a Navy hat and an empty suit.

After all that, about half of one percent of 8.1 million votes separated these two.

The Associated Press has not yet called the Senate races in Florida or Arizona, where Republican Martha McSally leads Democrat Kyrsten Sinema by less than one percent, or just over 15,000 votes. Republicans currently hold 51 Senate seats, to the Democrats’ 46. A runoff special election will be held on Nov. 27 in Mississippi between Republican incumbent Cindy Hyde-Smith and Democratic challenger Mike Espy, as neither obtained the 50 percent required for a victory Tuesday.