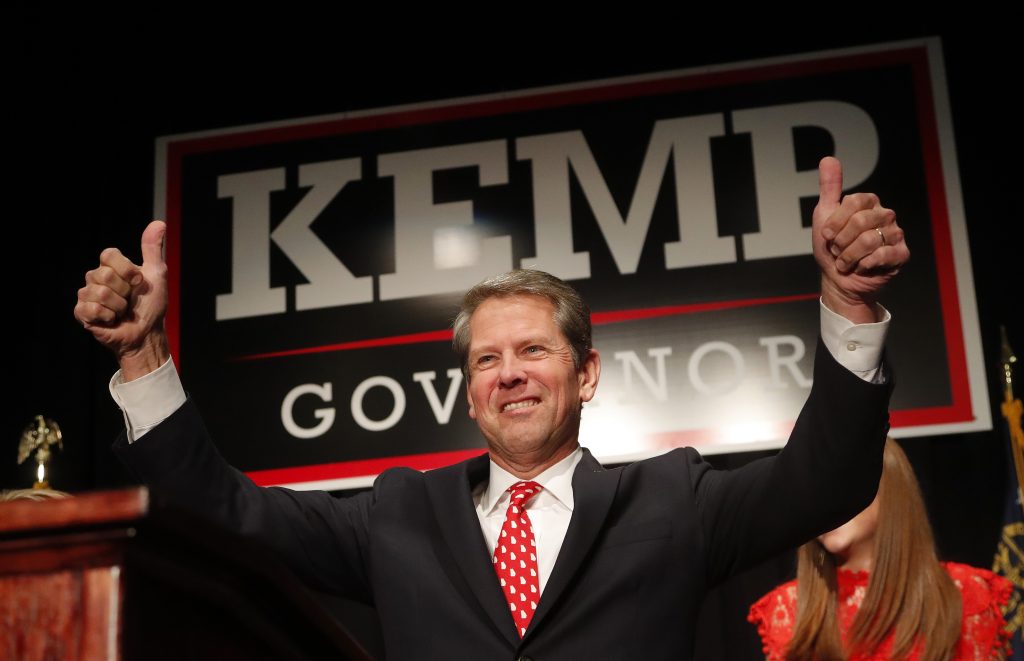 Democrat Stacey Abrams and Republican Brian Kemp are in a tense standoff as the fate of the Georgia governor’s race remains unresolved, leaving the potential of litigation and a December runoff.

Abrams’ team is renewing its concerns that Kemp, the current secretary of state, remains the chief elections officer supervising his own election, a race already marked by disputes over the voting process.

With reported votes exceeding 3.9 million — almost 95 percent of Georgia’s 2016 presidential turnout — Kemp has just more than 50 percent, but Abrams and her campaign maintain there are enough uncounted ballots to bring the Republican below the majority threshold required for victory.

“We are leaving all of our options on the table,” including litigation, Abrams’ campaign manager Lauren Groh-Wargo told reporters Wednesday. “We feel we owe a fight … to every Georgia voter,” she said, adding that the Abrams campaign and Georgia Democratic Party are engaged “in all 159 counties” as counting continues.

Groh-Wargo estimated Wednesday morning that about 15,000 votes separate Kemp from a runoff. She says at least that many outstanding absentee and mail-in ballots remained to be counted.

Kemp’s spokeswoman in the secretary of state’s office, Candice Broce, said that by Wednesday afternoon the number of uncounted absentee and mail-in ballots was less than 2,000 — with her boss still above the 50 percent threshold.

Broce said about 22,000 provisional ballots have yet to be processed, according to a canvass of county officials across the state.

If a runoff is necessary, the second round would take place Dec. 4, extending one of the marquee races of the November midterms as Abrams tries to become the first black woman elected governor in American history while Kemp looks to maintain the GOP’s domination in a state evolving into a genuine two-party battleground.

Either way, Georgians are sure to see a new round of bitter recriminations over ballot access and voting rights that could leave some voters questioning the outcome of a contest both nominees have described as a “battle for the soul of our state.”

“This is why we had a steady drumbeat for him to resign,” Groh-Wargo said Wednesday, noting Abrams’ and others’ warnings about the potential for chaos in a tight election. “Here we are,” she said.

Kemp told his supporters early Wednesday that “there are votes left to count, but we have a very strong lead. … The math is on our side to win this election.”

His cushion for an outright majority later shrank after more ballots had been counted. So far, turnout exceeds the 2014 governor’s race by about 1.3 million votes.

Spokeswoman Candice Broce noted local elections authorities manage the voting process and ballot tabulation. “Counties have not completed certification and we are still waiting for counties to provide their tabulations leading up to that certification,” she said.

A nonprofit group, Protect Democracy, filed a lawsuit Tuesday seeking to keep Kemp from being involved in counting votes, certifying results or any runoff or recount. Broce called it a “12th-hour stunt.”

State law gives counties until next Tuesday to complete vote counts and certify results to state elections officials. The statewide certification must follow by Nov. 20.

The indefinite extension in Georgia focuses a white-hot spotlight on a race that already has drawn massive investments of time, money and star power — from President Donald Trump and former President Barack Obama to media icons.

The tight returns and potential runoff come after weeks of wrangling over Georgia’s election system and Kemp’s performance as its chief executive. Kemp has steadfastly defended his job performance and refused calls to step aside.

Abrams has called Kemp “an architect of suppression,” and voting rights activists expressed concerns throughout Tuesday amid reports of technical malfunctions and long lines at polling stations across the state.

The elections chief wasn’t immune to the difficulties: When Kemp went to cast his own ballot, he had an issue with his voter card, but it was fixed quickly.

Abrams, a 44-year-old Atlanta attorney, former state minority leader and moonlighting novelist, already has made history as the first black woman to be nominated for governor by either major party. She’d also be the first woman or nonwhite governor in Georgia history.

Kemp, a 54-year-old businessman and two-term secretary of state, is vying to maintain the GOP’s hold in a state where Republicans have won every governor’s race since 2002, though by shrinking margins, amid a growing and diversifying electorate.

In the closing days, Kemp basked in Trump’s glow, pulling out of a debate to attend a Sunday rally that drew thousands of boisterous Republicans to central Georgia to see Trump deplane from Air Force One.

Abrams answered with Obama and a celebrity.

Even if Abrams ultimately falls short, she has outperformed her fellow Democratic nominees from recent election cycles.

That validates her strategy of reaching out to nonwhite and younger voters who don’t usually cast midterm ballots instead of Democrats’ previous focus on trying to convert older white voters who’d long drifted toward Republicans.

Her success came at a cost, however, as unofficial returns showed Kemp expanding the GOP’s advantage across rural and small-town Georgia.