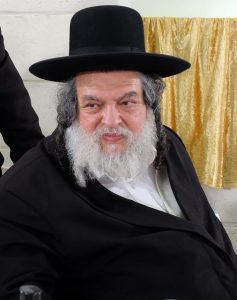 Hundreds of people, including many from the Gerrer community in Yerushalayim, took part in the levayah on Motzoei Shabbos of Harav Chanoch Simcha Bunim Levin, z”l, a scion of the Gerrer dynasty as a great-grandson of the Sfas Emes, zy”a, who was niftar on Shabbos after an illness. Many Rabbanim and Rebbes attended the levayah, including the Gerrer Rebbe, shlita.

Reb Binem was born in Av 5712/1952, the only son of Harav Pinchas Yaakov (Pinyeh) Levin, son of the Bendiner Rav, Hagaon Harav Chanoch Tzvi Levin, zt”l, son-in-law of the Sfas Emes. His mother, Sarah, was a noted mechaneches.

His father, Reb Pinyeh, was one of the founders of the Bais Yaakov schools in Yerushalayim.

After his father’s petirah, Reb Binem succeeded him as menahel of the Seminar, known as the Seminar Hayashan, serving in that position for 40 years.

Reb Binem was close with many Gedolei Yisrael of the previous generation, zt”l, and had an especially close connection with the Beis Yisrael, zy”a. He would stand at the first place in the Beis Medrash for Birkas Kohanim.

He was noted for his acts of tzedakah and chessed, including hosting many for Shabbos seudos or anyone in need.

In recent years, he took ill and was hospitalized several times. Despite all his pains, he would daven every morning at the netz minyan.

Reb Binem was hospitalized on Erev Rosh Hashanah, after a health complication. He was taken to Ichilov Hospital in Tel Aviv  this week in serious condition, and was niftar on Leil Shabbos.

He was buried in the Sanhedria cemetery in Yerushalayim, near his mother, a”h.

He is survived by, lhbch”l, his wife, children and grandchildren.