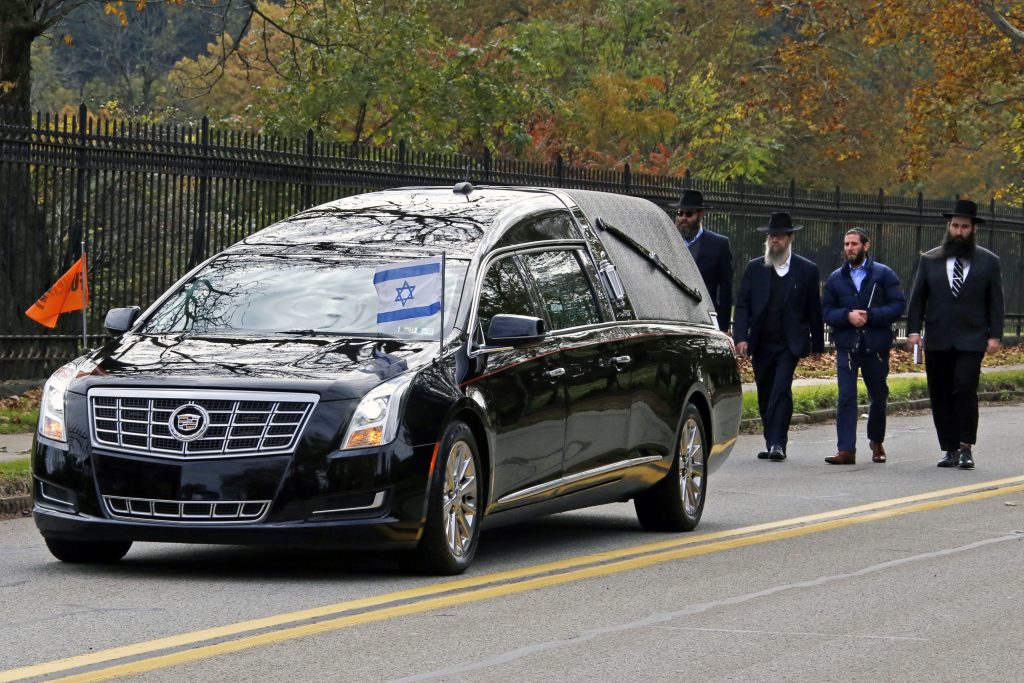 Just moments before the Pittsburgh congregation shooting that left 11 people dead, the suspect is believed to have posted a final social media rant against a Jewish refugee settlement agency most people had never heard of, but which has increasingly become the target of right-wing rage and conspiracy theories.

“HIAS likes to bring invaders in that kill our people,” Robert Gregory Bowers wrote on the platform Gab early Saturday. “I can’t sit by and watch my people get slaughtered.

The group, formerly known as the Hebrew Immigrant Aid Society, was founded in 1881 in a Manhattan storefront to assist Jews persecuted in Russia and Eastern Europe. HIAS is now among nine groups that contract with the State Department to help refugees settle in the United States, and it has recently clashed with the Trump administration over policies that have throttled the flow of such newcomers.

Leaders of HIAS and the group’s Pittsburgh affiliate vowed to continue their work.

“We were the perfect target for this murderer, because we’re Jewish and we help refugees. So he gets to check off the two hate boxes,” Mark Hetfield, president and CEO of HIAS, told a news conference Tuesday in Pittsburgh.

Hetfield said HIAS is getting flooded with donations, with more coming in from non-Jews around the world than Jews for the first time in the organization’s history.

Analysts who follow the extreme right say the fixation some extremists have with HIAS appears to be fueled by a mix of anti-Semitism and the recent caustic rhetoric about an immigrant caravan trudging slowly toward the United States.

Specifically, they believe Bowers ascribed to the “white genocide” conspiracy, which holds that Jews are prominent among the forces seeking to destroy the “white race” by bringing in non-white people. The Gab.com account believed to be Bowers’ includes several recent postings or re-postings critical of HIAS.

Based in the Washington, D.C., suburb of Silver Spring, HIAS has an annual operating budget of $42 million and receives about half of its money from the federal government. It has resettled refugees of different faiths from Afghanistan, Vietnam, Iran and elsewhere. Among the thousands of people it has aided are Google co-founder Sergey Brin.

As the Trump administration restricted the number of refugees allowed into the U.S., HIAS and its local affiliates went from resettling 4,191 refugees in 2016 to 1,632 for the fiscal year that just ended.

Though HIAS strongly supports the rights of asylum seekers to a fair hearing, it has no connection to the immigrant caravan, said spokesman Bill Swersey.

“We’re the people who go to the airport, that bring the refugees home, that make sure there’s food in the fridge, make sure their kids know where the school is,” said Melanie Nezer, HIAS’s senior vice president for public affairs.

But right-wing extremists see HIAS in a more sinister light.

Heidi Beirich, who directs the Southern Poverty Law Center’s Intelligence Project, said HIAS’s name comes up on white-supremacist message boards whenever posters become angry about refugees or immigrants. She noted that other resettlement agencies, such as those associated with Christian religions, have not raised the same sort of ire.

It happened toward the end of the Obama administration during the debate over Syrian refugees. Attention ratcheted up recently as President Donald Trump and others started drawing attention to the migrant caravan slowly making its way through Mexico toward the U.S. border.

Trump intensified his warnings about the caravan Monday, tweeting, “This is an invasion of our Country and our Military is waiting for you!” as the Pentagon announced plans to deploy 5,200 troops to the Southwest border.

“White supremacists are ginned up right now,” Beirich said. “Their words are being echoed back to them by high-profile public figures.”

HIAS also has been public in its opposition to Trump’s immigration policies. It sued the administration in 2017 over the executive order halting refugee resettlement. In August, HIAS and the ADL led a delegation of national Jewish organizations to the U.S.-Mexico border.

Oren Segal, director of the Anti-Defamation League’s Center on Extremism, said the high-profile visit this summer could have drawn the attention of right-wing extremists.

As Bowers appeared in federal court in a wheelchair Monday, HIAS-affiliated offices across the country increased security.

Nezer said the group is still processing the tragedy.

“I think we need to redouble our efforts to stand up for these values and not cower and hide,” she said, “because to me that would be the most dangerous response.”