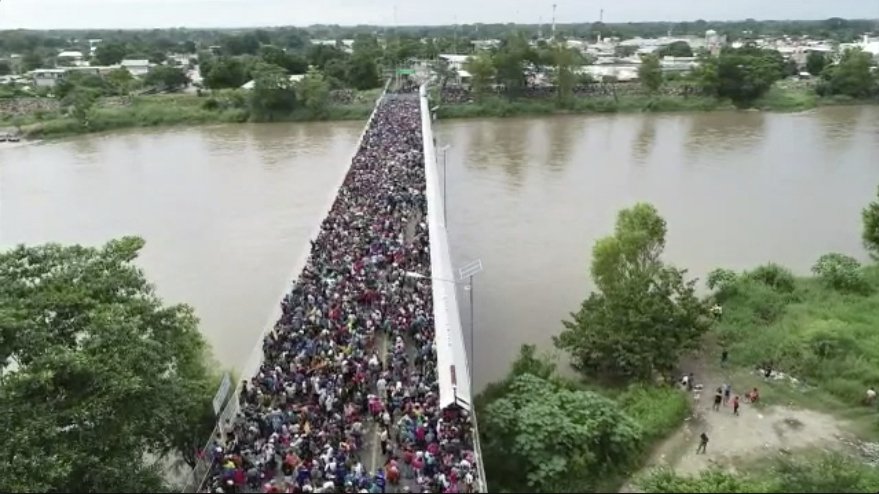 For years, an annual caravan of Central American migrants traveling through Mexico to the U.S. border received modest publicity until President Donald Trump condemned it in April, pitching the procession into the glare of the world’s media – and into the homes of thousands of potential migrants.

Though only a fraction of the 1,500 migrants made it to the United States, coverage of their trek in vehicles and on foot inspired many considering the journey to see caravans as a safer way to travel than the perilous trip many had for years undertaken alone, dozens of migrants told Reuters.

“It was a real success,” 20-year-old Honduran Antonio Perreira said of the impact of April’s caravan, as he rested with 14 friends on the way to Mexico.

When another caravan set off in Honduras on Oct. 13, it quickly became larger than the one Trump had castigated six months earlier, swelling to an estimated 7,000 to 10,000 people.

Perreira and his friends from Via Nova, a municipality near the Honduran city of San Pedro Sula, were among them.

To stop the caravan, President Trump has threatened to cut off aid to Central America and to close the U.S.-Mexico border. The mostly Honduran migrants will likely face bureaucratic hurdles in Mexico and possible deportation as they inch northward.

But even if it disperses, more caravans are forming, migrants say, posing a challenge to Mexico’s government and offering Trump an opportunity to campaign hard on illegal immigration before Nov. 6 U.S. congressional elections.

Henry Martinez, 33, from Honduras, said relatives in his home town of Choluteca told him 1,000 more people were setting out from there at the end of last week.

Reuters could not immediately confirm the departure from Choluteca. However, Casa del Migrante, a migrant shelter in Guatemala City, said over 1,000 people who entered from Honduras were moving through Guatemala towards Mexico’s border.

A solderer and painter who left behind four children and his wife with a heavy heart to search for work, Martinez said he started his journey with about $100. By Monday, that had dwindled to pennies.

Such destitution lies behind a caravan expected to leave San Salvador on Oct. 31, said one of its organizers, Alex, who declined to give his last name for fear of reprisals. At least 1,000 people have joined the caravan’s social media group, he said.

Alex said he and his co-organizers contacted members of the Honduran caravan, who told them to seize the moment.

“They will go ahead, and we will follow,” he said. “How else can we leave our country? We have no money for food or travel.”

Born first as an idea on social media, the caravan gathered momentum as news of it spread fast on social media and word of mouth in Honduras, a country of nine million.

In Santa Rosa de Copan, about 100 miles from San Pedro Sula, Adalberto Gonzalez, 22, stumbled into a gathering of townsfolk at a gym planning to catch up with the caravan.

A nurse who said he loved his job but had not been paid for a year, Gonzalez hustled out of town with a group the next morning. Gonzalez said he and others believed the caravan would protect them from robbers, and corrupt police.

Daniel Morales, 22, said the streets and houses of his San Pedro Sula neighborhood Medina were “abandoned” and that he had left last week looking for work with 500 neighbors. It was not immediately possible for Reuters to verify his account.

April’s caravan reached the U.S. border with about 400 people amid the Trump administration’s “zero tolerance” policy, which led to at least 2,500 mainly Central American children being separated from their parents.

But more than 50 Honduran migrants interviewed by Reuters in recent days said they were worried less about what would happen to them in the United States than the need to flee violence, unemployment and corruption at home.

All expressed deep skepticism that anything would change in Honduras.

Maria del Carmen, a Honduran single mother, squeezed a small daughter to her leg as she talked of being separated from her children. “I put my faith in G-d,” she said. She left a son in a pastor’s care and headed north with her two small girls.

Around her, about 3,000 other people bedded down in a plaza in the Mexican city of Tapachula on cardboard and plastic bags or tucked themselves into doorways.

Many believe they have nothing more to lose.

“We don’t care if Trump cuts off payments,” said Alexander Fernandez, who told of losing “everything” – a thriving business with five employees, his car, his house – when the MS-13 gang extorted him out of his ironmonger’s shop.

He walked fast with the caravan, carrying nothing but the clothes he was wearing and a cap to ward off the searing sun. “That U.S. aid never reached us anyway.”