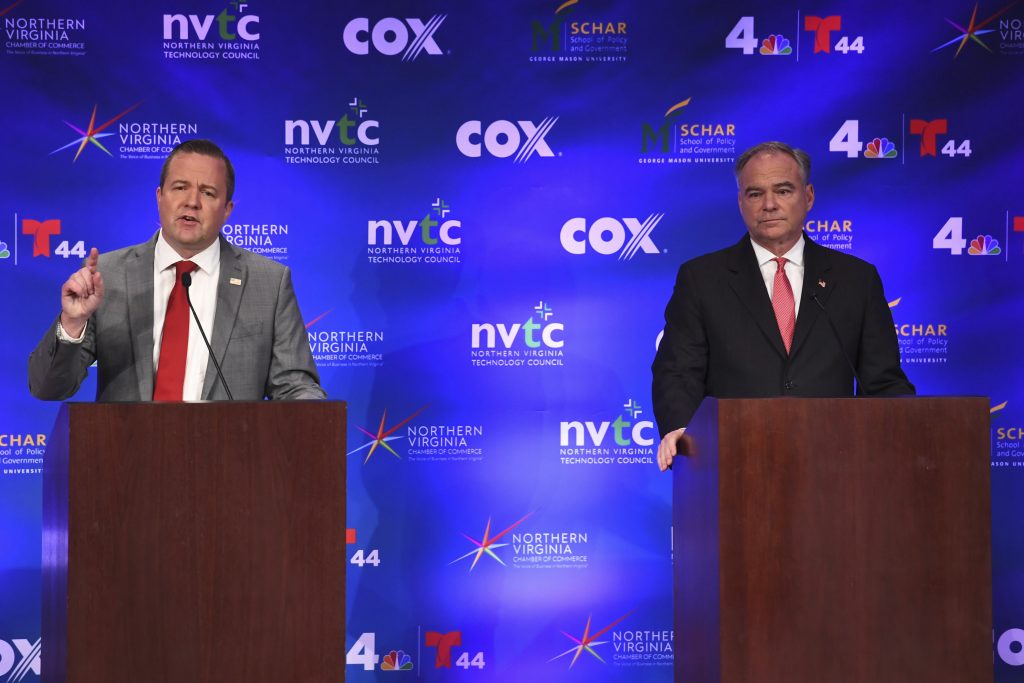 The forum at a temple in Fairfax County came a week after a vandal spray-painted swastikas on the walls of the Jewish Community Center of Northern Virginia, less than a mile away.

Many saw the vandalism, for which no one has been arrested, as part of a tide of hate amid intense political divisions in the country that last year included chants of “Jews will not replace us” during the violent “Unite the Right” rally in Charlottesville, Virginia.

On Sunday, both candidates condemned anti-Semitism and vowed to do more to prevent it in Virginia. Speaking at different times, each also implied his opponent sanctioned such beliefs.

“There’s a false narrative about Charlottesville that it was about (Confederate) statues, but when you really hear what people were chanting, there’s nothing about statues that makes you want to chant something out of a Nazi youth rally,” Kaine said in a dig at Stewart for attracting support from white nationalists by championing the preservation of Confederate monuments in Virginia.

“It’s a tiny minority, but they are emboldened and we have to speak against it,” Kaine told the audience of about 150 people at the “Men’s Club Election Brunch,” which also included Jeff Dove, the Republican seeking to unseat Rep. Gerald Connolly, D-Fairfax.

Connolly was invited to the event but did not appear.

Kaine leads the Senate race by nearly 20 points in most polls. Stewart has been hampered by controversies that have included his appearance with white supremacist Jason Kessler at a news conference six months before the Charlottesville rally, and by praising white nationalist Paul Nehlen, author of several anti-Semitic tweets, as “one of my personal heroes.”

On Sunday, Stewart, chairman of the Prince William Board of County Supervisors, argued that anti-Semitism exists on both sides of the political aisle.

Stewart said the Boycott, Divestment, Sanctions movement, whose goals include pressuring Israel into pulling its citizens out of the Gaza Strip and West Bank, has been championed by progressives in the United States who harbor anti-Semitic beliefs.

“It’s not just anti-Israeli, it’s an anti-Semitic movement,” he said.

Stewart also attacked Kaine for endorsing Leslie Cockburn, a Democratic candidate for Congress in Virginia whom Republicans have called anti-Semitic because of a 1991 book she co-wrote that was highly critical of U.S.-Israeli covert operations. Kaine has said he doesn’t view Cockburn’s book as anti-Semitic. In addition, when Kaine was chosen as the running mate for Hillary Clinton in 2016, many conservative Jewish organizations criticized him for his positions which they called anti-Israel.

“If this were on the Republican side of the aisle, all of us would immediately condemn it,” Stewart said.

As the candidates discussed U.S.-Israeli relations (both support a strong bond) and reducing the federal deficit (Kaine wants federal spending governed by the national gross domestic product, while Stewart wants states to have more control over Medicaid spending) the audience appeared more sympathetic to Kaine.

That was reflective of a 2017 Brandeis University study that found most of Northern Virginia’s Jewish community of 121,500 consider themselves Democrats.

Many in the crowd nodded in agreement as Kaine characterized the Kavanaugh confirmation hearings as “rushed” and dismissive of the allegations. A few clapped when Stewart again accused Kaine and other Democrats of trying to hide certain claims brought against members of Congress.

Mike and Ellen Hilert said they didn’t believe a lot of what Stewart said, particularly his claim that the county’s cooperation with federal immigration authorities has led to a dramatic drop in violent crimes.

“We wish we had a fact-checker here, because we know some of the things we heard here were not accurate,” Ellen Hilert said.

Fred Singerman said he appreciated the attention paid to anti-Semitic behavior, but still left the event depressed by a suggestion from Kaine that such acts warrant tighter security.

“It bothers me that our answer to everything seems to be more security,” he said. “It just escalates violence.”