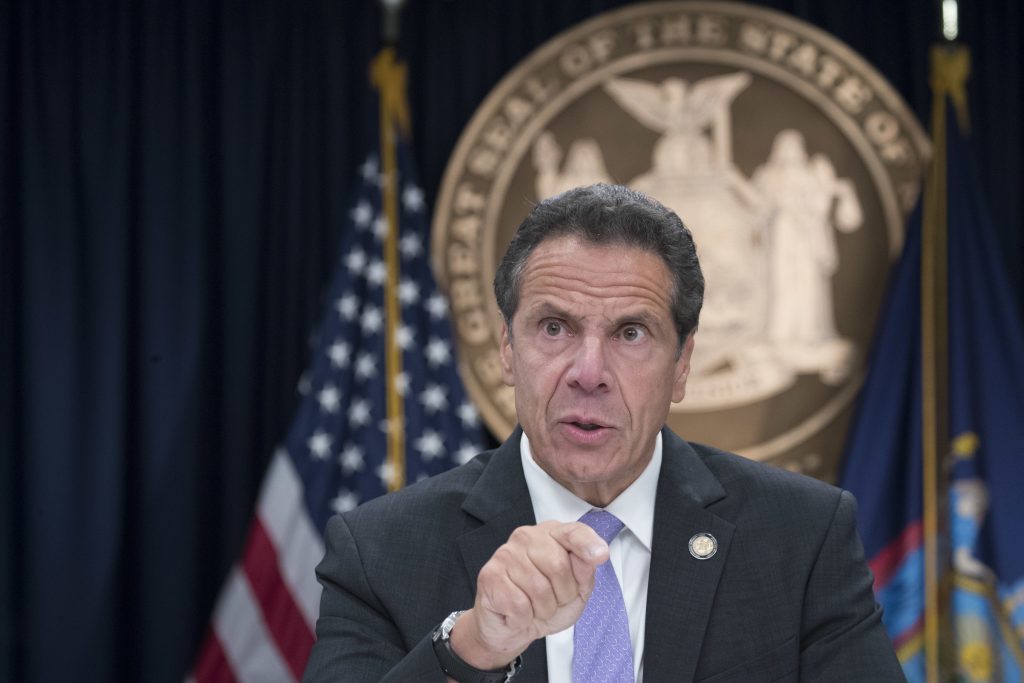 Gov. Andrew Cuomo questioned Sunday why state Republicans would have invited the founder of a far-right group to speak in Manhattan, and he blamed them and President Donald Trump for violent clashes that took place after the speech.

Three people were arrested in New York City on Saturday following violent clashes after a speech by the founder of a far-right group, and police said they were reviewing video of the clashes and could make additional arrests.

The violence Friday night followed a speech by Gavin McInnes, the founder of the Proud Boys, at the Metropolitan Republican Club. Videos posted on social media show clashes between the Proud Boys and groups that were protesting McInnes’ speech. No serious injuries were reported.

The three arrested face assault charges and are awaiting arraignment Saturday in Manhattan criminal court. Police spokesman J. Peter Donald said the department was reviewing video and would make other arrests as warranted.

Several elected officials expressed outrage over the violence and blamed the Proud Boys, which has been designated as a hate group by the Southern Poverty Law Center.

“Authorities must review these videos immediately and make arrests and prosecute as appropriate,” Gov. Andrew Cuomo, a Democrat, said. “Hate cannot and will not be tolerated in New York.” Cuomo said he had also requested the FBI to assist.

New York City Public Advocate Letitia James, a Democrat who is running for state attorney general, said, “I am disturbed and disgusted by the videos I’ve seen of members of the neo-fascist, white supremacist Proud Boys group engaging in hate-fueled mob violence on the streets of New York City.”

City Councilman Rory Lancman, also a Democrat, said video shows police officers were at the scene of an assault by Proud Boys members but did not arrest anyone from the group.

“It is revolting to see white supremacists commit a hate crime on the streets of New York City, in full view of the NYPD, and for none of them to be arrested or prosecuted,” Lancman said.

The Republican club was vandalized ahead of Friday’s speech by McInnes, who is also a co-founder of Vice Media. Statewide Republican officials said the damage included smashed windows, a spray-painted door and a keypad lock covered in glue. A note left at the scene claimed that the damage was “just the beginning.”

In a conference call with reporters, Governor Cuomo called the invitation to Proud Boys founder Gavin McInnes to speak at the Metropolitan Republican Club a “political tactic because what they’re trying to do is fire up their base” ahead of the midterm elections.

“Why would the Republican Party, at their main club, invite the Proud Boys,” Cuomo asked, pointing out that they have been designated as a hate group by the Southern Poverty Law Center.

In an emailed statement, spokeswoman Jessica Proud said, “It’s unconscionable that when Republicans were attacked and threatened, Governor Cuomo said absolutely nothing. Violence of any kind has no place in society, yet the governor, who is charged with ensuring everyone’s personal safety and property is protected, only thinks those rights should be afforded to Democrats. It’s not surprising coming from the man who said conservatives have no place in the state, but it’s nonetheless outrageous.”

The NYPD on Sunday said the situation was still being investigated, and no additional arrests had been made.