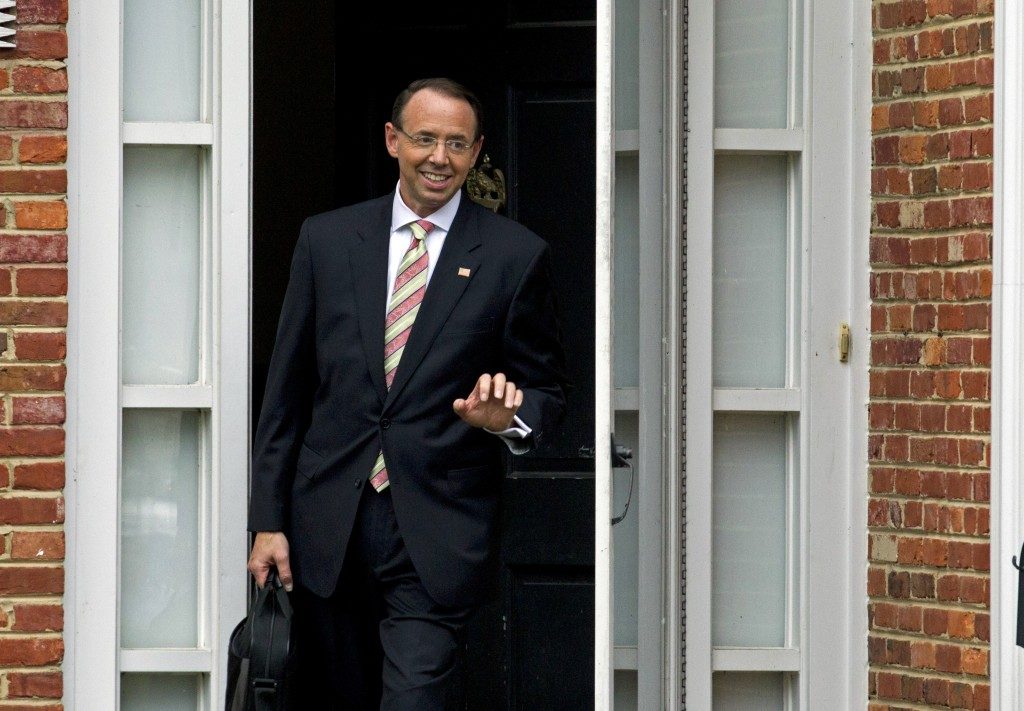 Deputy Attorney General Rod Rosenstein’s fateful meeting with President Donald Trump over the future of his job will be pushed to next week, the White House announced Thursday.

In a statement around 12:30 p.m., the White House said Trump “spoke with Rod Rosenstein a few minutes ago and they plan to meet next week.” The statement said the two men did not want to do anything that might affect the ongoing congressional hearing over Brett Kavanaugh’s nomination to the Supreme Court.

“They do not want to do anything to interfere with the hearing,” the statement said.

The move was expected. Trump said at a news conference Wednesday that he hoped to postpone a planned Thursday meeting and keep Rosenstein in his job – even amid news reports that the deputy attorney general last year suggested using a wiretap to monitor the president or invoking a constitutional amendment to force him from office.

Rosenstein has disputed those reports – which are based in large measure on what former acting FBI Director Andrew McCabe alleged in contemporaneous memos the deputy attorney general had said.

Trump has a light schedule Thursday afternoon and is expected to watch the Supreme Court hearings from the White House. He will visit his Trump International Hotel in the evening for a fundraiser.

The meeting’s postponement marks a dramatic de-escalation of a conflict that Monday seemed certain to end with Rosenstein leaving the Justice Department, injecting uncertainty into the special-counsel investigation of whether Trump’s campaign coordinated with the Kremlin to influence the 2016 presidential election. But Rosenstein is still not out of the woods.

The House Judiciary Committee issued a subpoena for McCabe’s memos, as well as other materials related to the Russia investigation. Conservative Republicans signaled Thursday that they expected Rosenstein would come to Capitol Hill “soon” to testify before the House Judiciary and Oversight and Government Reform committees.

“I think we’re moving in a good direction as far as getting Mr. Rosenstein to come before Congress,” Rep. Jim Jordan, R-Ohio, said.

Over the weekend, Rosenstein had offered to resign amid the reports about his wanting to wiretap the president, and the Justice Department prepared for a future without him. Matt Whitaker, Attorney General Jeff Sessions’ chief of staff, would take over as deputy attorney general, and Noel Francisco, the solicitor general, would take over supervision of the Russia probe.

Instead, Rosenstein went to the White House Monday, expecting he would be fired, then stayed in his job. Some advisers urged the president not to remove him – wary of inspiring Democrats with the midterm elections just a few months away. On Wednesday, Trump declared at a news conference, “My preference would be to keep him and to let him finish up.”

The president also noted that Rosenstein disputed the accounts describing what he had said, and reiterated his own disdain for McCabe. Trump has frequently criticized McCabe for political contributions his wife, who ran unsuccessfully for state office in Virginia, received from a political action committee of an ally of Hillary Clinton.