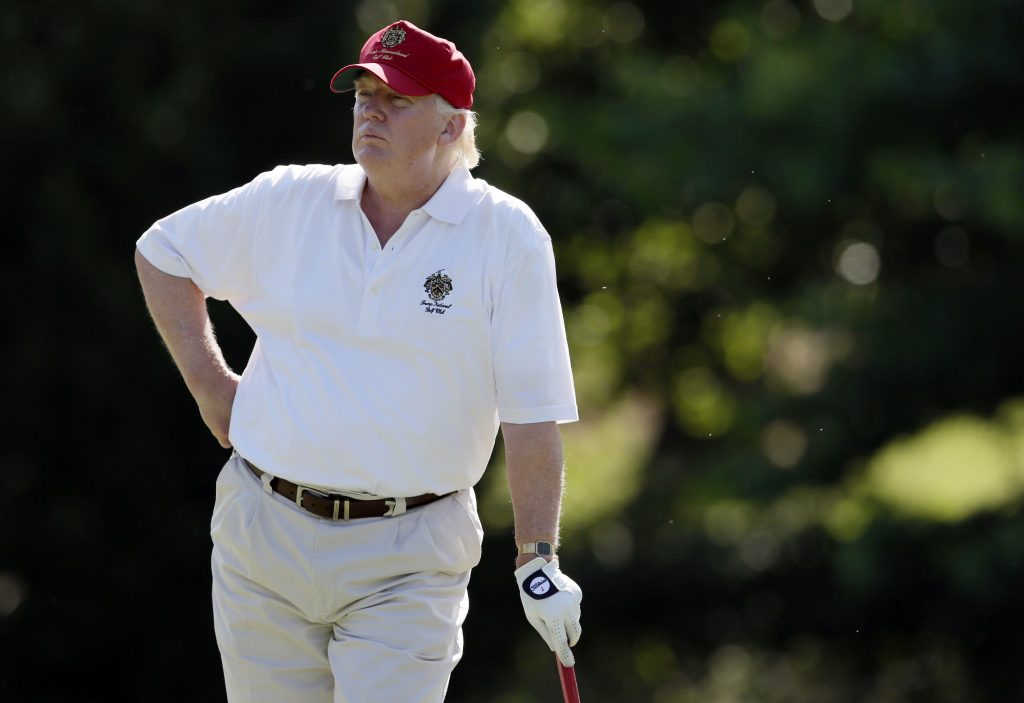 Paddlers who use the near President Donald Trump’s Loudoun County, Virginia, golf course filed a federal lawsuit Thursday morning to try to reverse a policy that closes a two-mile stretch of the river when the president is playing golf.

The Coast Guard instituted the shore-to-shore security perimeter last summer, angering recreational canoers and kayakers who use the river for paddling, classes and conservation.

Democracy Forward, a nonprofit formed last year that focuses on executive branch actions, is representing the Canoe Cruisers Association of Greater Washington DC, which is based in Maryland.

The lawsuit, filed in U.S. District Court for Maryland, Southern Division, says Trump has made more than three dozen visits to the golf club since the rule was put in place, and each time river access was restricted to some degree.

“We do see a pattern that this administration will flout the law when it suits its policy aims,” said Nitin Shah, senior counsel with Democracy Forward Foundation.

The group also sued the administration for rolling back Obama-era guidelines for requiring airlines to report lost and mishandled wheelchairs.

The paddlers’ lawsuit names as defendants Adm. Karl Schultz, commandant of the Coast Guard, and Kirstjen Nielsen, secretary of the Department of Homeland Security, as well as their agencies.

A spokeswoman for Nielsen said the agency does not comment on pending litigation.

Shah said the defendants violated a federal law that requires government agencies to give prior notice and allow for public comment, adding the rule is overly broad and has no end date.

In addition to the Canoe Cruisers, which was founded in 1956 and has about 250 members, the policy hampers paddling schools, summer camps for children and members of the U.S. Whitewater Team who are training for the Olympics, and disabled veterans who paddle with Team River Runner, according to the lawsuit.

The security zone, known as “Seneca Lake,” is a calm stretch of river that is particularly useful for beginners, classes and river cleanup outings, the suit says.

“The beauty of the river is its privacy and solitude, and to have patrol boats on the river is so unsettling,” said Barbara Brown, an avid paddler since the late 1950s and head of the Canoe Cruisers.

The section is bordered on one end by a dam and Seneca Break rapids. It features two access points for paddlers on the Maryland shore: Riley’s Lock, where there is a county-run park, parking and the headquarters of a youth camp, and Violette’s Lock, which includes parking and a picnic area, the lawsuit says.

In June 2017, the Coast Guard put in place a rule establishing a “permanent security zone” from the Virginia shore to the Maryland shore for about two miles.

After instituting the rule, the agency gave the public a chance to weigh in and received more than 600 comments, all of them negative, according to the lawsuit.

A few weeks later, the previous Coast Guard commandant, Adm. Paul Zukunft, surprised paddlers by testifying before a House committee that the river would remain open on the Maryland side while Trump was playing golf.

Paddlers welcomed the change, which means that on a case-by-case basis, paddlers have been informally allowed access on the Maryland side for more than a year. However, they worry the privilege could be taken away at any time and want to see the rule scaled back in writing.

Michael Graham of Kensington, Maryland, was recently teaching a swiftwater rescue class when he was approached by Coast Guard officials who at first wanted his students to cross the river at a dangerous point.

Ultimately, the kayakers were allowed to use a safer route, but the ordeal helped prompt Canoe Cruisers to file the lawsuit.

“The thing that frustrates us is that it’s so unpredictable,” he said. “You can’t run a school, you can’t run a camp not knowing if today is not going to be the day.”

Paddlers prefer that instead of restricting access along the half-mile width of the river, the Coast Guard reduce the security perimeter to half that distance on the Virginia side.