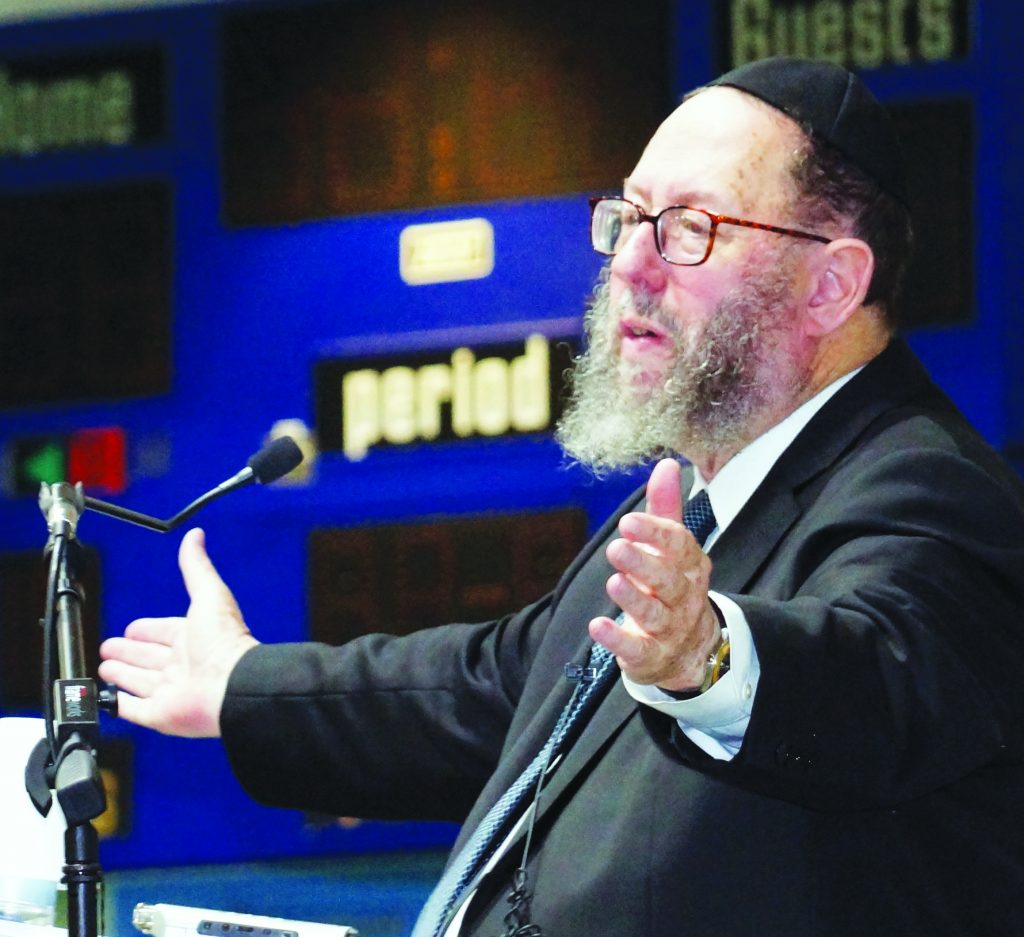 It was 14 years ago that this Shabbos was set aside for the first time to host Rav Frand as the scholar-in-residence. He has returned every year since, at this propitious time, to inspire us and invigorate us, to raise our level of hisorerus and teshuvah before the Yom Hadin.

The yearly visit of Rav Frand is always hosted by the three families of Rabbi Jacob Friedman and the family of Mr. David Rubin. Rav Frand spends Shabbos as a guest at the home of Rabbi Aaron Dovid Friedman and his family.

The pre-Selichos drashah is the concluding event following the annual Shabbaton at Yavneh with Rav Frand.

After a Friday night dvar Torah, a Shabbos morning drashah, a Shabbos afternoon halachah shiur and the Motzoei Shabbos pre-Selichos teshuvah drashah, you can be sure that Los Angeles was injected with enough “Frand” medication for the Yamim Nora’im.

Rabbi Shlomo Einhorn, dean of Yeshivat Yavneh, had the honor of introducing Rav Frand. Rabbi Einhorn, a Los Angeles native, has been the dean of Yavneh for the last seven years.

In his initial comments, Rav Frand pointed out that he has seen a tremendous growth in the shul. “As an outsider, I can say that Rabbi Einhorn’s presence has made a difference in the shul. He has brought a tremendous amount of energy to the shul. His ahavas haTorah is infectious and it has spilled over to the rest of the shul.”

Rav Frand concluded his thank-yous with a final one for Rabbi Moshe Dear, Yavneh’s headmaster, “who has been the driving force behind all these weekends.”

Rav Frand began the evening with a series of stories, each one making a point to be remembered. One of his stories was from a book Just One Word — Emunah, by Mrs. Esther Stern, about Harav Yechiel Michel Feinstein, zt”l, the son-in-law of the Brisker Rav, zt”l.

It seems that his daughter had asthma and one day she had a severe attack. They could not find any of her nebulizers, so they called for an ambulance.

By the time the ambulance arrived, it was too late. She died. When the family was preparing to go to the levayah, someone looked under her bed and discovered three nebulizers!

The family was devastated. It was terrible. To lose a child because they forgot to look under the bed is devastating.

Harav Yaakov Galinsky, zt”l, came to be menachem avel. He reminded Rav Feinstein about what they had learned when they were talmidim together in the Lomza Yeshivah.

“There are experiences that happen in our lives and we are tempted to say, ‘If I would have done it differently there wouldn’t have been this terrible outcome.’ This is not true!

“That is the serenity that comes with emunah.”

It was then that Reb Michel was comforted.