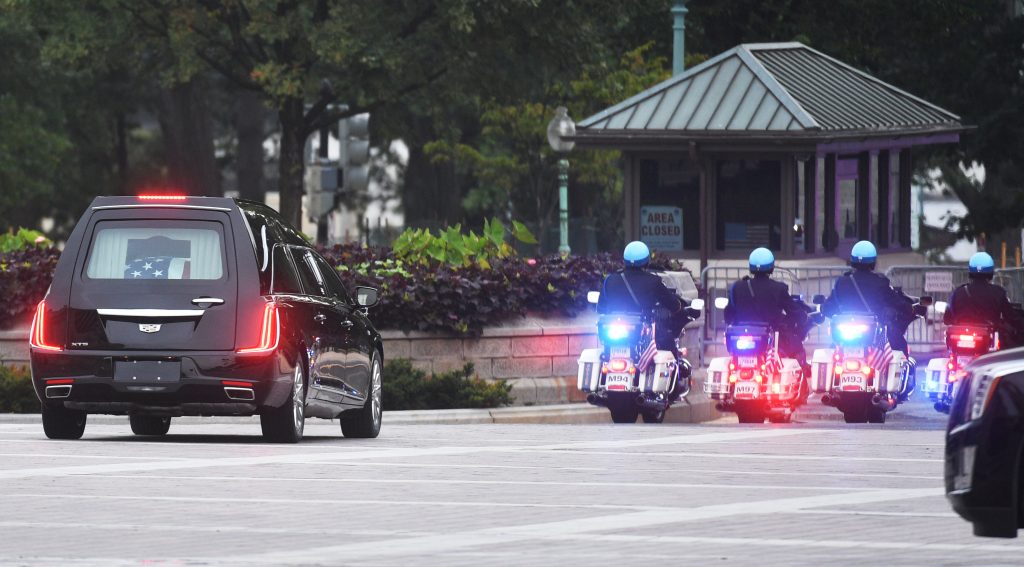 Obama said: “We come to celebrate an extraordinary man, a warrior, a statesman, a patriot who embodied so much that is best in America.”

The former president noted McCain was a conservative lawmaker, but said “he did understand that some principles transcend politics, that some values transcend party.”

Without naming President Donald Trump, who did not attend the funeral, the Senator’s daughter Meghan McCain condemned the president in remarks that at times drew applause and came after she said her dad told her to “show them how tough you are” with her eulogy.

“We gather here to mourn the passing of American greatness, the real thing, not cheap rhetoric from men who will never come near the sacrifice he gave so willingly, nor the opportunistic appropriation of those who live lives of comfort and privilege while he suffered and served,” she said, speaking forcefully and, at times, through tears.

For years Trump feuded publicly with McCain and mocked his military service, continuing to knock him even after he grew ill. The former Republican senator from Arizona died on Aug. 25 from brain cancer, days shy of his 82nd birthday.

Nearly every major U.S. political leader attended the memorial service, and while Trump himself was absent, his presence was felt through the content of the tributes.

And by design. McCain asked Obama and Bush to deliver eulogies while the family made clear that Trump was not welcome.

Obama praised McCain for opposing “bending the truth to suit political expediency or party orthodoxy” and as a proponent of a “free and independent press.”

Trump has repeatedly called the media the enemy of the American people.

Key members of Trump’s administration were in attendance, including his daughter Ivanka Trump and her husband Jared Kushner.